First Author’s Institution: The Observatories of the Carnegie Institution for Science 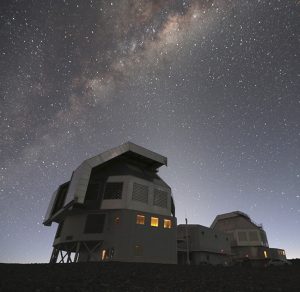 Figure 1. The Magellan telescopes, at Las Campanas observatory in Chile, where the photometric and spectroscopic followup data was taken. Credit: Ana Frebel.

With advances in technology and more time dedicated to deep sky surveys, we are able to probe deeper and deeper into the universe. Today’s astrobite is about a new discovery of the most distant quasar – an incredibly luminous active supermassive black hole – ever observed. It’s at a redshift z = 7.54: its light has been traveling towards us for 13.1 billion years, from when the universe was only 690 million years old.

So why is this interesting? Surely as we look deeper, we’re bound to find more “most distant” objects – it’s just a matter of time. But finding objects like these is challenging, and such discoveries can reveal a lot about the early universe.

The next-furthest quasar, catchily named ULAS J1120+0641, was discovered way back in 2011, and is the only other quasar detected at a redshift greater than 7. Getting a larger sample of quasars at these high redshifts has been a high priority in research into the early universe, but they have proven hard to find. Why quasars? They’re the most luminous objects in the universe, and investigating what happens to the radiation they emit tells us about the universe around them. Why z > 7? Because then we are probing the epoch of reionization.

Why is it so difficult to find these very distant quasars? The easiest way to spot quasars is using their optical spectra, and surveys like SDSS have uncovered thousands of them. But above z = 7, quasars stop being visible in the optical bands. Neutral hydrogen along the line of sight absorbs much of the radiation hotter than the Lyman-alpha line, the first electron transition of the Lyman series. At z > 7, the remaining emission cooler than Lyman-alpha is redshifted to observed wavelengths longer than 1 micron – well out of the optical window.

The approach used by the authors of this paper is to combine three infrared surveys probing three different wavelengths. If a source is detected in the longer two wavelengths, but not in the shortest, then it is likely that all of the emission beyond 1 micron is absorbed by intervening neutral hydrogen, so the source must be at very high redshift.

Follow up photometric and spectroscopic measurements, shown in figure 2, confirm that the source is a high redshift quasar! 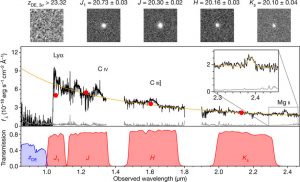 Figure 2: The photometric and spectroscopic data used to identify this record-breaking quasar. Top: the photometric images, which show the detections at longer wavelengths, and clear lack of detection at the shortest wavelength (z-band). Middle: the spectrum of the quasar, including a zoom-in of the Magnesium II line, the width of which was used to determine the black hole mass. Bottom: the transmission of the 5 photometric filters used. Figure 1 in the paper.

By looking at the spectrum of a quasar at such a high redshift, we can learn about its environment at this very early time in the universe. Hydrogen in the local universe is ionized: light can travel freely without being absorbed. But in the early universe, the hydrogen was neutral, absorbing all of the Lyman-alpha emission. The transition between these phases is referred to as the reionization of the universe. So at very high redshift, probing this epoch of reionization, there is still enough neutral hydrogen in the universe make a noticeable dent on the quasar spectrum. This great series of astrobites describes the effects of neutral hydrogen on the quasar spectrum in more detail, but in today’s paper the authors claim to detect a signature from neutral hydrogen which places this quasar well into the epoch of reionization – only observed once before, in ULAS J1120. This agrees well with estimates that the universe became ionized somewhere between redshifts 10 and 7 determined by other methods.

How to grow a supermassive black hole

The other major constraint that this observation provides regards the growth of supermassive black holes (SMBHs). The authors measure the mass of the black hole in this quasar to be around 800 million solar masses – which, only 690 million years after the Big Bang, means that somehow the universe had to grow a black hole that big in a relatively short amount of time. Using typical growth estimates for SMBHs, this requires a seed black hole with a mass of at least 1000 solar masses. Along with other high-z quasars, this puts significant constraints on models of SMBH formation.

This discovery is much more than just a new record holder: it provides another probe into the early universe, allowing us to test theories of the evolution of the first billion years. But as the authors emphasize, more detections at high redshift are required to better understand the history of ionization of the universe – this discovery has doubled the sample size of quasars at z > 7, but two is still a very small sample!