Title: Discovery of the Most Ultra-luminous QSO using Gaia, SkyMapper, and WISE

If you’re reading this, chances are you have heard of black holes.  These mysterious objects have long captured the interest of the public and scientists alike. Even The Simpsons have tackled this topic.

A supermassive black hole gives life to the subject of today’s paper, a quasar known as SMSS J215728.21-360215.1 (J2157-3602 for short), the brightest quasar yet discovered. Quasars are a type of Active Galactic Nuclei (AGN), which sit at the center of high redshift galaxies, meaning they have only been found at distances corresponding to the early universe. Their massive accretion disks allow them to outshine their entire host galaxy, making these astronomical bodies among the brightest objects in the sky.


So what’s with the name? ‘Quasar’ originated from the phrase ‘quasi-stellar radio source.’ These objects were identified as quasi-stellar because they appear to be a point-source, like a star. Many of the first quasars discovered emitted very strongly in radio wavelengths, but since then, it has been determined that only a fraction of quasars are ‘radio loud.’ So now, ‘quasar’ is simply in reference to ‘quasi-stellar objects,’ or ‘QSOs,’ as in the title of today’s paper.

The Quasar, the Myth, the Legend

Identifying quasars is harder than you think. Quasars tend to have similar colors to those of cool stars – even though they are intrinsically brighter than any star out there, they are much farther away and still appear dim to us Earthlings. Because of their distance and color, quasars can easily be confused with closer, faint field stars. 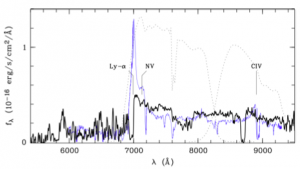 That’s where Gaia comes into play. This spacecraft has measured proper motions for over 1 billion objects with unprecedented precision. Something as far away as a quasar (J2157-3602 sits at a redshift of z = 4.75) should have no noticeable proper motion, allowing the authors to separate quasar candidates and cool stars, which should have detectable proper motion due to their proximity.

The authors cross-matched their candidates to SkyMapper, 2MASS, and WISE surveys in order to gather all relevant data for each source. Then, they applied some optical/infrared color cuts to further narrow down high redshift quasars. And that’s how they stumbled upon the great J2157-3602.

The authors then checked whether J2157-3602 is really as luminous as it appears to be. J2157-3602 hasn’t been detected in radio, so the authors classify it as ‘radio-quiet.’ This means there are no relativistic jets to boost its brightness. The authors found no objects close to the source (J2157-3602) in Gaia, VHS, or WISE images that could cause gravitational lensing, nor does it seem to be an extended source (an indicator of lensing as well). Gravitational lensing of the host galaxy could cause the quasar to appear brighter than it actually is, but since that doesn’t seem to be the case, J2157-3602’s brightness is all its own.

Figure 2: Images of the quasar in question from VHS in Y, J, and 2MASS K bands. The source sits in the center of the frame and is consistent with a point source in all three filters, indicating no gravitational lensing.

How Does it Compare?

The most massive quasars to date boast masses of 10 billion and 12 billion times that of the sun. These monsters radiate at their Eddington limit; if J 2157-3602 does the same, it should be about 20 billion solar masses, making it the biggest, baddest quasar out there. This mass is still to be constrained by higher resolution spectra, but the quasar in question is certainly the most luminous, with a bolometric luminosity

times brighter than our Sun (

Figure 3: Photometry of known quasars. J 2157-3602 is shown as the asterisk and PMN J 1451-1512 as the triangle. The most luminous UV-bright quasars are filled circles and the most luminous IR-bright AGN are open circles. Note that ELIRG J 2246-0526 is brighter than J2157-3602 in the IR, but lower in bolometric luminosity. Grey dots represent other known quasars and ELIRGS. See paper for sources.

The first author Christian Wolf has stated in interviews that J2157-3602’s black hole is growing faster than any other black hole discovered to date, feasting on a steady diet of two Suns worth of material per day. This means that if it was sitting at the center of our Milky Way instead of our milder Saggitarius A *, it would outshine the full moon 10 times over. With Gaia’s second data release, scientists will hopefully be able to spot more curious quasars and discover how they grew so fast in so little time.