What is a black hole kick? 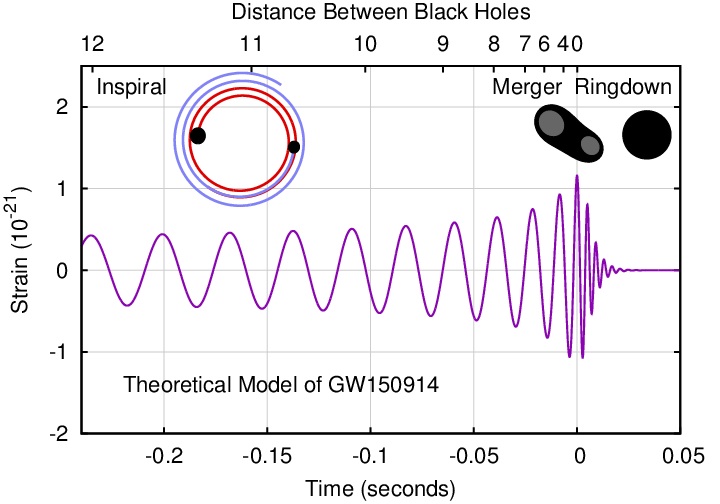 A toy model of gravitational wave recoil is presented in Figure 2 to demonstrate the concept. In an unequal mass binary, the smaller black hole moves faster than the larger one, causing the gravitational radiation to be beamed more effectively in a particular direction: there is a net ejection of momentum parallel to the smaller black hole’s motion. This is referred to as a beaming kick. Therefore, the centre-of-mass of the system recoils in the opposite direction, by conservation of momentum. 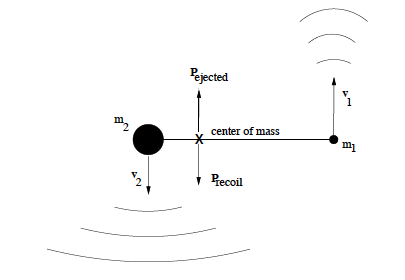 How big are these kicks and do they matter?


A natural question to ask is: how big are these kicks, and do they have astrophysical consequences? This precise question has been analysed in great detail using both numerical and analytic techniques. The punchline of these analyses is that the problem must be tackled relativistically, because the recoil is most significant where spacetime is strongly curved. General relativistic effects, such as gravitational redshift, have a tendency to reduce the recoil the kick velocity, in comparison with Newtonian estimates. Gonzalez and coauthors predicted the maximum kick from non-spinning black hole mergers to be ∼ 170 km/s. They accomplished this using full numerical simulations, and their result is consistent with analytic estimates (for example, the estimate calculated by Sopuerta, Yunes and Laguna, which builds on an earlier estimate by Favata, Hughes and Holz depicted in Figure 3).

Figure 3. Left. Motion of centre-of-mass position of the binary. Right. Total centre-of-mass ejection velocity vs. distance between black holes. Solid blue lines correspond to quantities during the inspiral while dashed red lines are calculations during the plunge. Image from Favata, Hughes and Holz’s analysis in https://arxiv.org/pdf/astro-ph/0402056v2.pdf.

Nonetheless, the size of the recoil is still likely to be of astrophysical significance. Although non-spinning black holes are likely to only experience kick velocities of order 170 km/s, rapidly rotating black holes can produce far larger recoil velocities if the progenitor black holes are spinning in nearly opposite directions before the merger. These types of kicks are called spin kicks or superkicks and can be as large as 5000 km/s. The history of superkicks is outlined in this bite. The escape velocity for a globular cluster is typically ~30 km/s while a galaxy escape velocity is typically ~1000km/s, so we can see that kicks of this size could have substantial astrophysical repercussions. Black hole ejection from globular clusters appears very likely and even the ejection of supermassive black holes from their host galaxies is possible through the mechanism of superkicks.


The implications of black hole kicks for galaxy dynamics is striking: even if the superkick does not entirely eject the black hole from its host galaxy (as shown in Figure 4), it would at the very least displace the black hole from the centre of the galaxy, altering galaxy core dynamics for around 10 Myrs. Surely an event of this scale would be observable electromagnetically? Indeed, a number of candidate galaxies experiencing post-merger black hole recoil have been proposed (for example, see here and here) based on characteristic electromagnetic signatures they display. However, the precise nature of the electromagnetic observations is still up for debate and by no means conclusive; it is challenging to disprove alternative interpretations.

Figure 4: Schematic of a supermassive black hole being ejected from a galaxy due to gravitational wave emission. Image from http://www.deepstuff.org/gravitational-wave-kicks-monster-black-hole-galactic-core/


After observing the gravitational waves produced by a black hole merger, it is in principle possible to indirectly infer the size of the kick that the remnant received. However, this type of indirect approach relies heavily on the accuracy of our modelling techniques. As proposed in today’s paper, a far more powerful approach is to use the gravitational wave signal to directly observe black hole kicks.

The recoil of the centre-of-mass of the system leaves a clear imprint on the gravitational wave frequency. The gravitational wave signal is Doppler shifted by the kick velocity – if the centre-of-mass is kicked towards (away from) the Earth, the gravitational waveform will be blueshifted (redshifted). Crucially, the frequency shift is not homogeneous across the entire signal: rather it is largest during the last few orbits and merger phase. This is illustrated in Figure 5: as the kick accumulates in the later stages of the inspiral and merger, the Doppler shift becomes increasingly prominent. 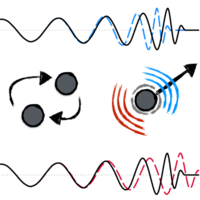 Is this effect detectable?

The authors of the paper did a back-of-the-envelope calculation to assess detectability and conclude that detecting these shifts with existing ground-based gravitational wave detectors is unlikely. However, measurements of supermassive black hole kicks larger than 100 km/s with space-based detectors, such as eLISA, looks very promising.