Supernovae Made Way for Cosmic Reionization

Status: Accepted to the Monthly Notices of the Royal Astronomical Society, open access

The epoch of reionization may not be a familiar time period to all, but it gave rise to the luxury we have to be able to see galaxies, stars, and planets far far away! Let’s have a one-minute review on cosmic history. As the Universe expanded after the Big Bang, the hot dense soup of energetic particles cooled down. After about 380,000 years, it cooled down enough where free electrons and protons could find each other and reunite into neutral hydrogen (it did happen, we took pictures!) Hydrogen atoms are extremely good at blocking light. If the Universe stayed neutral, we wouldn’t be able to see so far. So something must have managed to ionize these neutral hydrogen atoms back again for the second time since the first ionization during the Big Bang. Indeed we call the time before such reionization the cosmic dark ages.

We aren’t entirely sure what provided the photons responsible for reionizing the Universe. To this end, we astrophysicists are hard-working and creative. Black holes and massive stars, the merging of binary stars, and the low-mass and faint galaxies at high redshifts were found to be the potential suppliers of the ionizing photons. In particular, recent studies have argued in favor of the dominant role of low-mass star-forming galaxies, but there are much more to it. Photons have to escape the galaxies in order to contribute to reionization, on their ways they might be absorbed by gas or dust. What fraction of the ionizing photons could actually leave the galaxies? This is quantified by an important number known as the escape fraction, commonly denoted as fesc.

Observationally measuring fesc is challenging. The available sample of ionizing photon-leaking galaxies is limited, and the measurement is sensitive to the local dust content we know nearly nothing about. On the theoretical side, fesc is very model-dependent. For example, different numerical schemes for treating star formation may produce completely different trends in fesc. We therefore result in an almost-unconstrained range of fesc between ~0.01 and 0.6.

Today’s paper aims not just to calculate fesc, but to take a step forward in understanding the escape of ionizing photons from galaxies and what regulates fesc. Starting from three low-mass galaxies (with dark matter masses ranging from a tenth to a few billion solar masses) assembled in a cosmological simulation, the authors performed zoomed-in, high-resolution simulations of star formation. Supernova explosions were set to go off 10 Myr after the stars formed. In the course of the simulation, the propagation of ionizing photons was followed and the amount escaping was measured. In this bite we will focus on the representative results of the most massive galaxy out of the three simulated. 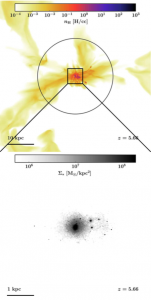 Figure 1. The density distribution of gas (upper panel) and stars (lower panel) in the most massive galaxy at the end of the simulation. We see that the gas is highly disturbed, and the stars distribute in a clumpy and irregular manner. [Figure 1 of original paper.]

To have a mental picture of what is going on, let’s take a look at what the galaxies look like. Figure 1 shows the distribution of gas and stellar densities at the end of the simulation. The gas has small structures brought by the strong disturbance of supernovae, and the stars are quite irregularly distributed across the galaxy. These features highlight the importance of starting the simulations from realistic galaxy environments. If we naively measure fesc from idealized configurations, we will be missing the properties that may be crucial in determining how the ionizing photons escape. 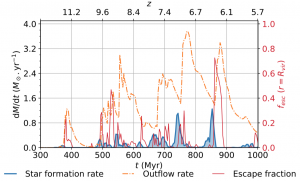 Figure 3. Time evolution of the escape fraction with different ways of modeling supernova explosions. The blue curves represent the base case where supernovae are inserted 10 Myr after stars form. The red curves correspond to shorter, 3 Myr delay after star formation. Black curves denote the case without supernova explosions altogether. [Figure 11 of original paper.]

To test the robustness of this insightful statement, the authors repeat the simulations with different recipes of modeling supernovae. The blue curves of Figure 3 show the same escape fraction evolution in Figure 2, only in logarithmic scale. With a shorter delay of 3 Myr for supernova explosions after stars form, the same episodic photon escape is observed, with similar durations (similar widths of blue and red bands). In contrast, ionizing radiation hardly escapes in the case without supernovae included (black curves). This finding strongly supports the dominant role of supernovae in shaping how photons actually escape low-mass galaxies, which might be the main contributor to cosmic reionization.