Hierarchical structure formation, where small structures collapse and merge to give rise to larger structures, is often used to describe the formation of the largest structures in the Universe. The Cold Dark Matter model predicts the bottom-up build-up of the Universe: small structures (galaxies) formed and then merged into bigger ones (galaxy clusters), resulting in the iconic, filamentary distribution of dark matter. In this astrobite, we will see that a similar picture may be at work in the making of star clusters.

We still do not have a clear understanding of how star clusters form. Unlike our physicist friends, in astrophysics we do not have the luxury of designing our own experiments with stars and galaxies. We can observe star clusters at different ages to try to piece together a narrative of their lives or we can also set up numerical simulations to study them from first principles. We have covered the formation of massive, super star clusters, star clusters near galactic centers, and star clusters in the early universe. In this bite we will discuss the hierarchical collapse model of cluster formation, and look into its implications on what we will see observationally.

To reproduce star formation within colliding streams of gas, the authors start the numerical simulation with two cylinders of gas under head-on collision (with total mass of ~105 solar masses). Besides the head-on motion, small velocity fluctuations have been imposed to mimic the turbulent nature of molecular gas. Upon collision, filamentary structures quickly develop. They then fragment into clumps, collapse gravitationally, and form stars. Heating by the UV/ionizing radiation of massive stars is included as the only stellar feedback process. 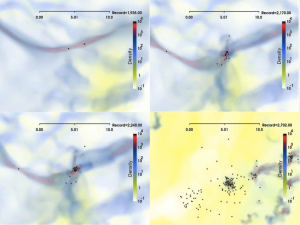 Figure 1. Snapshots of gas density at different times of the simulation with stars overlaid as black dots. The “Record” numbers on the top right of the panels are the simulation time in unit of 104 yr. Dark (light) colors correspond to high (low) gas density, in units of cm-3. The top rulers shows the spatial span of 10 pc. [Rearranged version of Figure 2 and 3 of the original paper.]

Figure 1 shows the gas density at four different times of the simulation, stars formed are shown as black dots. At early time (top left panel) stars form in the fragments along the filament. They subsequently approach each other and merge into a bigger group, the gas that flow along the filament feeds the central clump with fresh gas, allowing it to make more stars (top right). The radiation from massive stars later becomes strong enough to cut off the gas supply on both sides of the filament (bottom left). Two “naked” groups of stars (left of bottom right panel) then fall together with two other groups of stars embedded in their parent gas clumps (far right of bottom right panel).

Figure 2. Age histograms of the groups of stars shown in Figure 1, before (first panel) and after (other panels) merging. [Figure 10 of original paper.]

Figure 2 shows a time series of the age histogram of the stars in Group 1 and 2 (the two groups of stars shown in top left panel of Figure 1). After they merge (second gray histogram), we see that most of the stars are younger than 1 Myr old, with a few stars up to 4 Myr old. This indicates an acceleration in star formation. At later times (third and forth histogram), the number of young stars drop with the onset of stellar feedback.

The above figures perfectly summarize the hierarchical formation scheme of star clusters – small star-forming gas clumps are part of the filamentary flows that feed the larger growing clumps. The flows deliver both stars and gas into the larger collapsing clumps, the increase in gas density boosts the rate of star formation until feedback kicks in.

There are two important consequences. First, old stars that form early on inherit the infalling motions of the gas, so they tend to have larger velocities and can reach larger distances from the cluster center. This kind of center-young, outskirt-old age gradients were indeed observed in star-forming regions. Second, the increase in star formation rate suggests that massive stars typically form late. The lack of very massive stars was also observed in intermediate-mass star-forming regions.

The current simulation does not tell a full story of star cluster formation. For example, the star formation prescription adopts a pre-defined initial mass function without worrying the physics that put such population of stars in place. Also, the stellar feedback treatment is crude. Nevertheless, it provides a realistic framework to study the multi-scale collapse of gas clouds and the assembly of star clusters, together with valuable observational insights.

The featured image of this post is taken from Figure 4 of an earlier work by the same research group.

A Windy Day in the Milky Way

Understanding how massive star clusters form in our Universe