Title: On the Origin of the Salpeter Slope of the Initial Mass Function
Authors: M. S. Oey
First Author’s Institution: Department of Astronomy, University of Michigan

One of the most basic links between the observable results of star formation and our theoretical understanding of the star formation process is the stellar initial mass function (IMF).  This function tells an astronomer the number of stars she should expect per mass bin. Since the 50’s, we’ve known that the upper mass end (above 1 solar mass) of the IMF is well described by a power law,

with Γ ~ 1.35.  This is known as the Salpeter slope of the IMF, after its discoverer.  While the value of the slope is well-measured, a theoretical understanding of its physical origin is lacking.  The slope is recovered in simulations of star formation, regardless of the physical processes at work or details of the simulation, and seems to be a generic feature of hierarchical collapse.

The slope its self is puzzling. Stars form in clusters, which are observed to have a mass function of the form,

with Β ~ 1.0.  Since star clusters and individual stars should form from the same hierarchical fragmentation process, it is strange that the resulting mass functions are similar, but not identical.  A slope of 1.0 corresponds to a uniform distribution of mass between small and large scales. The simple Γ = 1.0 also follows from simple theory, because if stars acquire mass by Bondi-Hoyle accretion, then the accretion rate, ṁ, should scale as m2.  Using this scaling, and assuming that the number of stars is invariant during mass accretion, one can trivially solve the continuity equation,

and obtain that n should scale as m-2, which implies dn/dlogM goes as m-1, as expected.

In this paper, the author proposes that the departure from the simple m-1 scaling with mass arises because of a simple fact: the natal molecular cloud must first fragment into clumps, which must in turn fragment into stars.  Individual clumps cannot be arbitrarily large, and in fact may have masses comparable to stellar masses.  This means that not every clump can fragment into an arbitrarily massive star, implying that once the cluster finishes forming the resulting power-law slope of the mass function should be steeper than m-1, even if individual clumps fragment into a collection of stars with a mass function that goes as m-1. 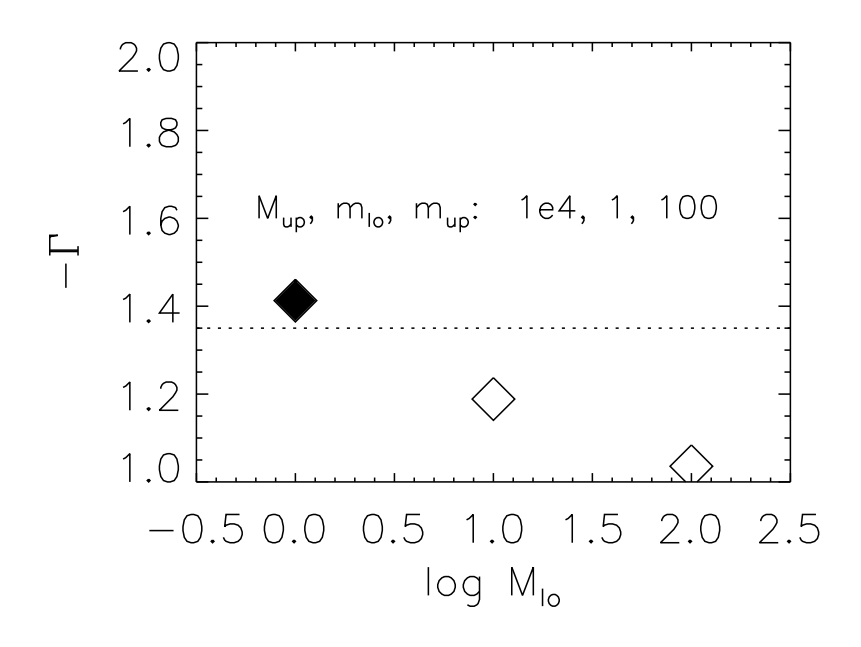 The dependence of the power-law slope of the IMF on the minimum possible mass for a star-forming clump.