Dating the Evaporation of Globular Clusters

Title: Dating the Tidal Disruption of Globular Clusters with Gaia Data on Their Stellar Streams 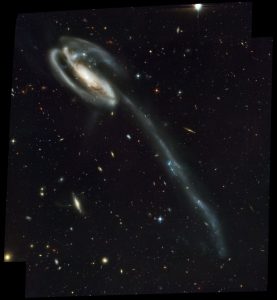 Figure 1. Tidal forces don’t only have an effect on globular clusters! The dramatic tail of the Tadpole Galaxy (Arp 188) is also the result of a gravitational tug. Credit: NASA

We see these tidal tails in many globular clusters, but the question remains: How can we figure out when the tidal disruption began? 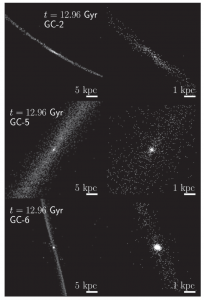 Figure 2. Simulated globular cluster tidal streams at a redshift of 0. All else being equal, a more compact cluster (bottom row) experiences less tidal disruption than a more extended cluster (top row). Figure 1 from the paper.

Today’s paper introduces a new technique to estimate the age of tidally disrupted globular cluster streams. While the ages of the globular clusters themselves are usually determined using stellar evolution models, it can be challenging to figure out when the gravitational pull of the Milky Way began to tear them apart.

The authors of today’s paper found a way to pinpoint the time of tidal disruption by considering the evolution of simulated globular clusters orbiting a Milky-Way-like galaxy. They varied the initial position and velocity (with respect to the center of the Milky Way’s gravitational potential) of six otherwise identical globular clusters — the same mass (100,000 solar masses) and initial mass function.

The simulated globular clusters were then allowed to evolve forward in time from roughly 13 billion years ago to today. Figure 2 shows the results of the simulations for three of the six clusters, demonstrating the importance of the initial conditions.

While the simulated globular clusters give us a good sense of what happens during tidal disruption, they aren’t a good representation of what we would actually observe; telescopes aren’t infinitely sensitive, and their magnitude cutoffs can impose some interesting restrictions on observations. To explore this, the authors simulated what the Gaia survey would see when observing these clusters, assuming a sensitivity limit of 20 magnitudes. Figure 3 compares observable and unobservable stars from three of the simulated clusters. 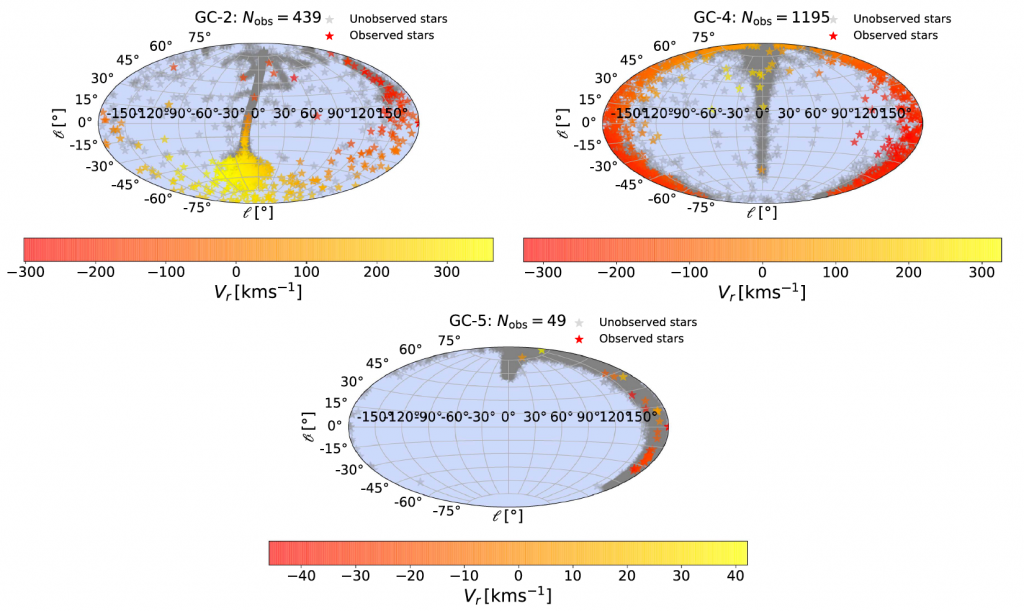 Figure 3. Maps of the sky in galactic coordinates showing three of the simulated clusters. Stars unobservable by Gaia are shown in grey, while observable stars are shown in color, with the color corresponding to each star’s radial velocity. The number of observable stars decreases as the distance to the cluster increases (counterclockwise from top right). Figure 2 from the paper.

Now considering only the stars that Gaia would observe, the authors found that it’s possible to relate the time at which the tidal destruction of the cluster happened to the proper motions and parallaxes of stars in the tidal tails. Specifically, the more scattered the positions of the stars and the less scattered their velocities along the tidal stream, the longer the time elapsed since the cluster was gravitationally disrupted. 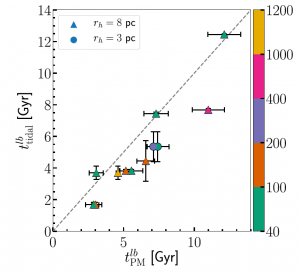 Figure 4. Comparison of the disruption time estimated using the positions and proper motions of stars (horizontal axis) and searching backward through the simulations. The proper motion/position method tends to slightly underestimate the time since tidal disruption. Figure 4 from the paper.

To test that their method recovers the correct disruption time, the authors also searched backward in time in their simulations. They were looking for the time at which the motions of the stars in the tidal stream switched from being controlled by the gravitational potential of the cluster to the gravitational potential of the Milky Way — in other words, the point in time at which the cluster was disrupted. Figure 4 shows that the two methods agree reasonably well, but that the magnitude cutoff of their simulated observations skewed the estimate to be smaller than the true value.

This happens because larger stars are brighter and more easily observed, and tend to be found closer to the center of the cluster. As a result, smaller stars are drawn into the tidal stream before larger stars, and the inferred time since disruption tends to be a bit too short. Still, this is a huge step forward along the path to accurately dating the tidal disruption of globular clusters — an exciting prospect for learning more about the Milky Way’s history!

How Do You Weigh a Galaxy?