So what does a molecular cloud produce, anyway?

Collapsing regions of molecular clouds produce objects with a range of masses, from teeny planets to stars that are a hundred times the mass of the Sun. The ‘initial mass function’ plots the relative number of bodies as a function of mass. What does the initial mass function look like? And how much does it depend on the local environment? The distribution is determined by the poorly-constrained processes of star formation, which involve physics of the evolution of structure, chemistry, and star formation rates of galaxies, as well as the formation and evolution of stellar and exoplanetary systems. If we can determine the initial mass function exactly, we can help make some headway in these disparate fields.

In this paper, Drass et al. strategically chose to survey the Orion Nebular Cloud (Fig. 1), which is only 1,350 light-years (414 parsecs) away and has produced stars that have not yet been churned around in the Milky Way like the siblings of our own Sun. It is very young, perhaps a couple million years old– so low-mass objects are still glowing with the heat of formation and the first generation of high-mass stars is still present. 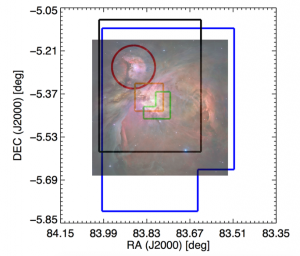 Fig. 1: The Orion Nebula Cloud, with the footprints of different surveys. Drass et al.’s footprint is in black. The circled region is the nebula M43, which Drass et al. removed from their analysis because it may have an initial mass function distinct from the cloud as a whole. (Adapted from Drass et al., Fig. 1; HST images were taken with ACS B, V, H-alpha, I, and Z filters.)

The authors used the Very Large Telescope in the Atacama Desert in Chile with 1.25, 1.65, and 2.15 micron filters, in which small-mass objects are relatively bright. This filter combination also allows each star to be placed on a color-magnitude diagram, which, in combination with models, determines stellar masses or temperatures.

Drass et al. removed contaminants and overlaid their color-magnitude diagrams with lines called ‘isochrones‘, which indicate model locations of stars of different masses. These were used to convert the colors of the detected stars to actual masses. Voilà– the end result is an initial mass function.

Surprisingly, the mass function corresponding to an age of 2-5 million years has two distinct peaks (Fig. 2)! If the Orion Nebula is indeed that old (some think it might actually be younger) and if the isochrones are accurate (isochrones are debatable at the lowest masses), then the Orion Nebular Cloud seems to be preferentially producing objects at around 0.25 and 0.025 solar masses. These correspond to low-mass stars and brown dwarfs. There are also, the authors note, some free-floating planets below the brown dwarf range.

Drass et al. suggest that this mass function is evidence against a pure one-to-one mapping of the core mass and initial mass functions. Dynamical interactions may indeed have played a role by whipping low-mass objects out of interacting systems and littering the Orion Nebula with orphaned, low-mass objects. It is not possible to definitively prove this with current models, but the authors suggest the answer “has to be searched for along that direction.” 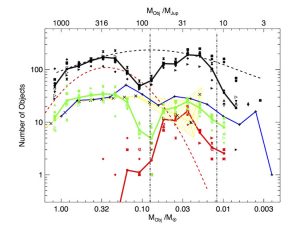 Fig. 2: Here is the final initial (eh? ) mass function of the Orion Nebula (black line). Different data points were generated using different filter combinations and give a sense of the uncertainty. Green corresponds to the mass function of another region in Orion with very high extinction, where background contaminants are masked by the intervening gas. Red shows the component of the green that is just due to brown dwarfs, and dashed lines show model initial mass functions from the literature. The similarity between the green and the black suggest that contaminants have been adequately accounted for, and that the bimodal nature of the initial mass function is real. (Drass et al., Fig. 12.)