Gravitational lensing, a result of general relativity, describes the way that light bends around a very massive object such as a galaxy cluster or black hole, causing multiple images of the object (or occasionally an entire Einstein Ring) to appear around the object.

Gravitational microlensing is caused by the same general relativistic effect, but with much less massive objects such as stars and planets. When a star or planet that is too faint to observe passes, by chance, in front of a background star, the background star appears to brighten dramatically. The change in brightness can be measured over time, and from the duration of the brightening, the approximate mass of the lensing object can be measured. Since 2003, this technique has been used to find 12 exoplanets orbiting faint stars.

Why is microlensing useful?

Microlensed planets are only useful for statistical studies of exoplanets because the events happen by rare chance alignments in the sky that last only a few days. We will never see the same planet twice (and thus can’t do any follow-up observations to characterize it).

However, this method is currently the only observational technique that can statistically probe free-floating planets (that is, planets not orbiting a star). These planets are far too faint to image directly, and can’t be probed by other indirect techniques. In this Nature letter, the authors publish the results from two years of data from a gravitational microlensing survey. They conclude that there could be twice as many free-floating planets as there are stars in the Milky Way!

The Microlensing Observations in Astrophysics (MOA) and Optical Gravitational Lensing Experiment (OGLE) are the two big groups that carry out large microlensing surveys. MOA-II, the second incarnation of MOA, has improved from the original by using a much faster cadence to observe 50 million stars in the direction of the galactic bulge. They use a cadence of 10-50 minutes, enabling them to detect the short events (less than 2 days) that are typical of lensing planetary mass objects. The MOA-II dataset from 2006-2007 forms the basis for this paper, with supplemental data provided by the OGLE group.

In two years of data, the team found ten events (out of 474) with durations of less than 2 days, interpreted to be planetary mass objects distantly located from any stars.

How many of these objects are there? 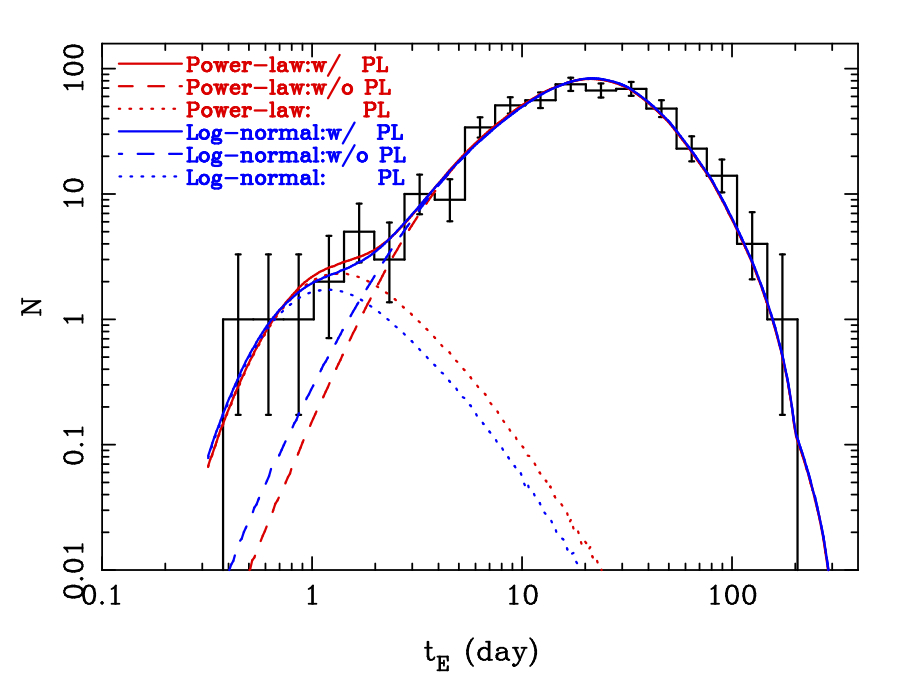 This plot shows the distribution of stellar and planetary mass objects found by this survey. Note that the data can be fit using either a power-law or log-normal distribution, but appears to be bimodal, indicating that there are 2 populations of objects.

This analysis indicates that there is a large population of planets unbound or far from a star. In fact, they find that there are ~1-3 times as many Jupiter-mass planets at least 10 AU from a main sequence star as there are stars in the galaxy. These objects could either be cold, distant objects in solar systems, or, the authors suggest, they could be free-floating planets, possibly ejected from solar systems after formation.

For comparison, in our solar system Uranus and Neptune are both located more than 10 AU away from the Sun, and all of the exoplanets that have been directly imaged to date orbit stars in distant orbits. Further constraints from upcoming direct-imaging instruments such as GPI and SPHERE will allow us to further constrain whether there is a significant population of planets that could statistically match the observations from gravitational microlensing. If the directly imaged planets in distant orbits aren’t abundant enough to match the microlensing data, this might confirm that billions of planets do in fact drift unbound and alone through the galaxy.