Title: Constraining the Frequency of Free-Floating Planets from a Synthesis of Microlensing, Radial Velocity, and Direct Imaging Survey Results

Nearly 100 years ago, a team of astronomers traveled to the tiny African island of Principe. They were there to observe a total Solar eclipse, visible from the island on 29th May 1919. More precisely, they took observations of stars close by to the Sun in the sky, which were only visible during the eclipse. When they compared those images with others of the same stars, taken when the Sun was elsewhere in the sky, they found that the stars weren’t quite in the same positions. This was due to the Sun’s gravity bending light, and the exact amount of bending was a key test of the General Theory of Relativity. The observations matched the theory exactly, and General Relativity now underpins our understanding of the cosmos.

The bending of light by gravity that the Principe expedition confirmed produces many other phenomena, which can be exploited to make otherwise impossible observations. Chief among these is microlensing, where the light from a distant star or galaxy can be magnified by another object in between it and the observer. Initially used to image distant galaxy clusters, it can also reveal the presence of otherwise undetectable planets.

This is done by watching dense regions of stars and seeing if any undergo a microlensing event. If there is no visible mass to cause the lensing event, then it may be a planet, too faint to observe. Fortunately, the lensing can be used to measure the object’s mass, allowing observers to distinguish between planets and other dim objects like neutron stars.

Such experiments have been done, and in 2011 led to a startling result. Along with planets around stars causing microlensing events, there also appeared to be a huge population of planets with no star, known as “rogue” or “free-floating” planets. The survey suggested that, for every single star in the galaxy, there are two planets floating alone in the dark.

The paper suggests that, instead of free-floating planets, the survey detected planets orbiting stars at very large distances. Such planets have been observed, and indeed it has been suggested that our own Solar system has one. The authors set out to test this in two steps: How many wide-separation planets are there, and, crucially, how many would produce a microlensing event that didn’t show traces of their parent stars?

Finding planets at long distances from their stars is tricky, as most planet-hunting techniques are biased towards close-in planets. The authors took the one method that does favour wide-separation planets, direct imaging, and combined it with what results are available from other techniques. They find that they can predict the distribution of such planets— i.e., for a given orbit around a star, how likely is it that there will be a planet there?

With this distribution obtained, the next step is to find what fraction of these would look like free-floating planets to a microlensing survey. The presence of a nearby star is usually visible in a planet’s microlensing event, as bumps or wiggles in the otherwise smooth curve of light coming from the lensed object over time. But for certain configurations of planetary systems, those markers wouldn’t show up. Using their distribution of wide-separation planets, the authors then simulated a large number of systems, and the microlensing events they produce. They then added in other sources of micro lensing, such as neutron stars and white dwarfs, and fitted their results to the 2011 data to see if their simulated wide-separation planets could explain away the apparent “free-floating” planets. 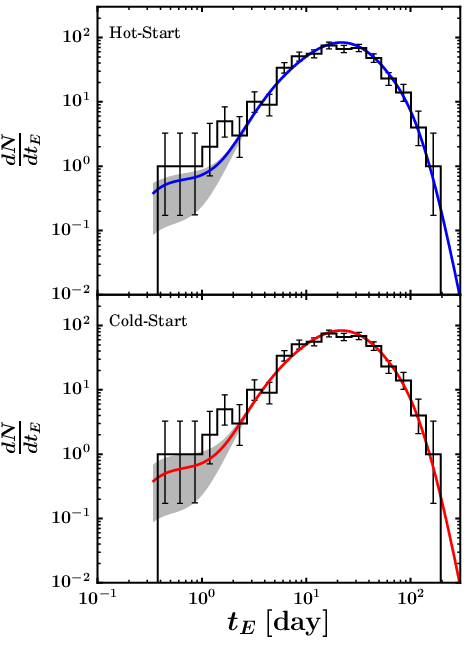 Figure 1: Results of the 2011 mircrolensing survey (black lines) fitted with this paper’s planetary distribution models for two different planetary formation models (blue/red lines). The x-axis shows the length of the microlensing event, which is related to the mass of the lensing object and the y-axis shows how many events were detected at each time. The models mostly fit the data, but under-predict it for the low mass objects (planets), meaning that extra, free-floating planets are needed (Figure 5 in the paper).

Figure 1 shows their results. The length of a microlensing event is related to the mass of the lensing object, so in the plot mass increases from left to right. At the high mass, non-planet end, the author’s model neatly fits the data. However in the planetary mass regime in the left hand side of the plot, the model under-predicts the data.  A fraction of the free-floating planets can therefore be explained by wide separation planets, but not many.

The authors put the ratio of free-floating planets to stars at 1.4 and 1.2 respectively for the “hot-start” and “cold-start” (referring to different planet formation models) planet distributions. Far from refuting the 2001 study, this work only slightly lessens the problem. The issue of how to produce these planets remains.

So is there a huge population of unseen planets out there? The authors finish by pointing out that there are still only a small sample of microlensing results available, insufficient to truly confirm or dispute this result. The WFIRST spacecraft planned to launch in 2025 could add hundreds to thousands of microlensing detections of free-floating planets, and reveal the true abundance of these lonely worlds.

Rogue One: The First Einstein Ring Measurements of A Free-Floating Planet