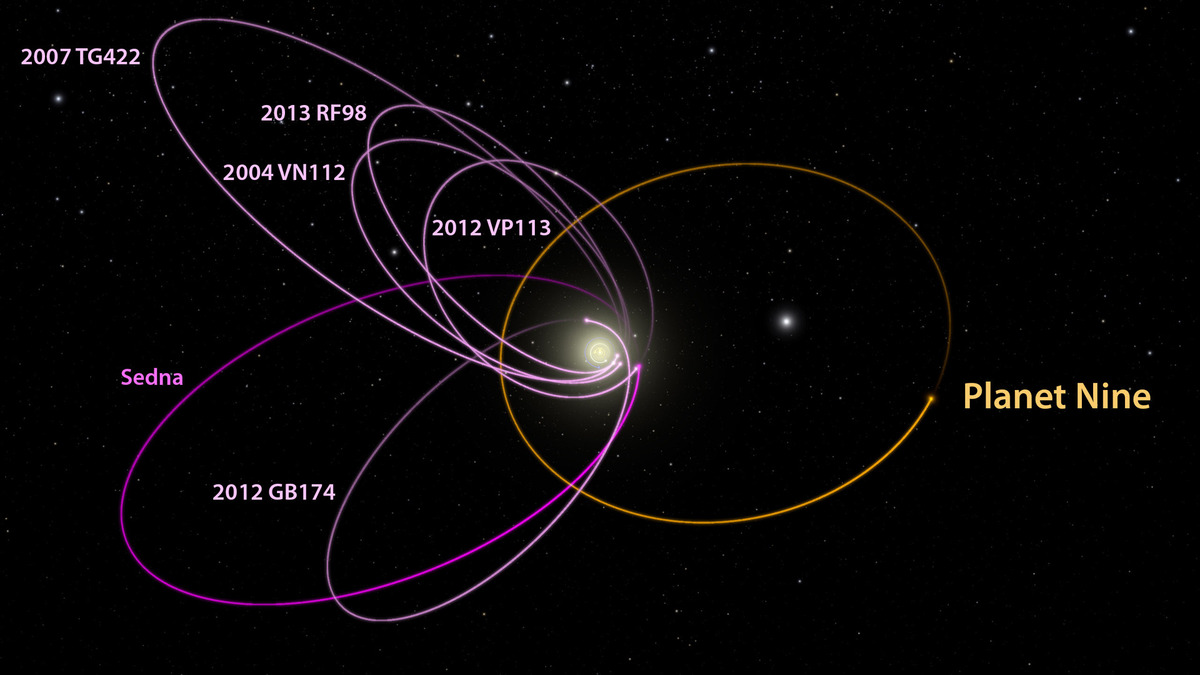 Ten years ago, Earth lost a member of our planetary family. The International Astronomical Union formulated a new set of rules required to be a part of the “planet” club. Poor Pluto no longer made the cut, demoting it to the status of “dwarf planet”. And then there were 8.

A decade after the loss of Pluto as a planet, its siblings in the outer reaches of the Solar System may be telling us that there is indeed a 9th planet. Not a Moon-sized object like Pluto, but one the size of the gas giant akin to Neptune! To add some irony to this situation, Mike Brown, one of the two authors of today’s paper evidencing the existence of a new planet, was partially responsible for bringing the planet count to 8 in the first place. He discovered the dwarf planet Eris in 2005 which led to Pluto’s demise, and wrote the book “How I Killed Pluto and Why It Had It Coming.” Many studies have attempted to find evidence of a missing Solar System planet (bite1, bite2), but this study may well be the most compelling evidence for the existence of “Planet 9”.

Many conjectures have been proposed as to why our Solar System may have a distant, undiscovered planet. One such theory even attributes periodic mass extinctions to a distant body in a highly eccentric orbit that sweeps close to the inner Solar System and wreaks havoc every 62 million years or so. Batygin and Brown instead look to recently-discovered Kuiper Belt Objects (KBOs) far past the orbit of Pluto for evidence.

Figure 2: The location of all known KBOs in orbital element – semi-major axis space. On the y-axis, the left panel plots the longitude of perihelion, the middle panel plots the longitude of ascending node, and the right panel plots the argument of perihelion. The dark green and light green points represent objects that were found to be dynamically stable and unstable, respectively. Note the clustering in the left and middle panel at semi-major axes above 250 AU and the clustering in the right panel above 150 AU. Eccentricities, inclinations, and perihelion distances are also labelled. Figure 1 in Batygin & Brown.

These distant wanderers have been found by previous studies to adhere to similar orbital characteristics: all known KBOs with semi-major axes greater than 150 AU that never come within the orbit of Neptune (i.e. their perihelion distance is greater than 30 AU) have arguments of perihelia clustered around zero degrees (i.e. the closest point to the Sun in their orbits lies precisely at the ecliptic). Though this in itself could just be a bias due to the higher likelihood of spotting these objects, they all also move from south to north as they cross the ecliptic, which cannot be explained away by observational biases. Multiple explanations such as the Kozai mechanism and inclination instability have been proposed to explain this clustering, but so far they all seem to have holes. The authors proceed to run simulations on these bodies to determine which are strongly influenced by the gravity of the neighboring giant Neptune and therefore unstable. The six that were found to be stable occupied an even tighter region in orbital parameter space, indicating that their orbits are physically aligned. If due to random processes, this clustering would only occur 0.007% of the time!

The minuscule likelihood that these bodies ended up in their orbits by chance indicates that the origin of their clustering was dynamical. Batygin & Brown took both analytical and numerical approaches in investigating whether a single planet perturber could lead to these resultant observations. Running a suite of N-body simulations, the authors remarkably found that a planet perturber could indeed lead to stable orbital clustering of the smaller KBOs, even if the orbits of the planet and KBO cross one another. These objects would be apsidally anti-aligned with the perturber, meaning the direction of perihelion of the giant planet and the KBO would be opposite the Sun from one another. This methodology for discovering a new planet is reminiscent of how the planet Neptune was discovered, which was mathematically predicted due to irregularities in Uranus’s orbit. To explain the observational data, a planet about 10 times the mass of Earth with a perihelion distance of greater than 250 AU seems to be a good fit. This means that over its ~18,000 year orbit, the brightest the Sun will ever be from the hypothetical “Planet 9” would be about 60,000 times dimmer than it is here on Earth.

Figure 3: Analogous to figure 2, except for particles evolved through an N-body simulation with the 10 solar mass planetary perturber. Parameters for the perturber are indicated on the leftmost plot. The orbital elements of particles on the y-axis are plotted relative to those of the planet. Coloring represents the initial semi-major axis of each particle, with redder colors being smaller initial values and greener colors being larger initial values. Figure 5 from Batygin & Brown.

How would a planet like this form in these distant, dark reaches of the Solar System? To form in-situ, the young solar nebula would have to be exceptionally expansive. Batygin & Brown instead reason that if this planet does exists, it was likely thrown out to this distant orbit during the tumultuous youth of the Solar System.

The theory of a single perturber fits the observational data, analytical analysis, and numerical simulations. But how can we tell if this is the correct theory to explain the clustering of KBOs? An important piece of scientific theory is that it makes predictions that could potentially be falsified by experiments. Said best by science philosopher Karl Popper: “In so far as a scientific statement speaks about reality, it must be falsifiable; and in so far as it is not falsifiable, it does not speak about reality.”

Batygin & Brown present multiple methods to do just this. Not only do their models predict that the perturbing planet can shepherd apsidally anti-aligned KBOs, but also apsidally aligned objects with much more distant perihelia (i.e. objects with longitudes of perihelia about 180 degrees away from the known KBOs and perihelia at distances over 250 AU). Searching for these distant, dim objects could add further credence to this theory and put greater constraints on the parameters of the planet perturber. Also, the clustering of the known KBOs is telling of the region in the sky the new planet may reside. Batygin & Brown will be using the huge field of view of the 8-meter Subaru telescope to commence this search for more evidential support and the planet itself.

Contrary to what has been indicated by much of the media about this study, Batygin & Brown do not claim to have found a new planet. They determined that the clustering of distant KBOs is highly likely to be dynamical in origin, and found a physical mechanism which can generate and maintain this peculiar clustering of orbital elements. Certainly, more observations and analysis will be needed to prove or refute this theory. But for now, we’ll leave this exciting story with Mike Brown’s two cents: “Killing Pluto was fun, but this is head and shoulders above everything else.”