Are There Two Missing Planets In The Solar System?

For years astronomers have wondered if there might be more planets in the Solar System, far beyond the orbit of Neptune. Although a survey made by the WISE spacecraft showed that there are no large gas giants left to be discovered, a recent finding has prompted the authors of this paper to propose the existence of not one, but two smaller planets in the outer Solar System.
Announced in 2014, the finding in question was 2012 VP133, a tiny planetesimal no more than a thousand kilometres across discovered by astronomers at the  Carnegie Institution for Science. 2012VP 133 will never get closer than 80 au1 to the Sun, and will swing out to more than 240 au  over the course of its orbit. Only one other Kuiper Belt Object (KBO), the slightly larger Sedna, has been found at these distances. What made the discovery most interesting was that 2012 VP133 and Sedna have curiously similar orbits.

One unusual parameter of their orbits in particular is the argument of perihelion, the angle between the point where the object is closest to the Sun (its perihelion) and the ecliptic, the plane on which the Earth and the other major planets orbit. Given that almost any orbit is possible for small objects that far out, you’d expect this value to be different for every one. But  both 2012 VP133 and Sedna have arguments of  perihelion close to one unique number: zero. This means that when these KBOs are at their closest point to the Sun, they line up exactly with the orbit of the Earth and the Sun.

And its not just 2012 VP133 and Sedna.  A suspiciously high number of closer KBOs also have arguments of perihelion close to zero. The authors wanted to find out if these discoveries were simply the result of observational bias, or if the findings signal that something else is going on.

To do this they ran two simulations, creating an artificial population of KBOs with a wide range of possible orbits, along with the Earth. Assuming that KBOs are most likely to be discovered at their closest approach to the Earth, they plotted the positions in the sky where each KBO would found (Figure 1). Running the simulation until the artificial Earth had made twenty million orbits, they looked for the locations where KBOs are most likely to be found.  Plot D of Figure 1 reveals the bias- the majority of objects will be found with 24 degrees North or South of the celestial equator. 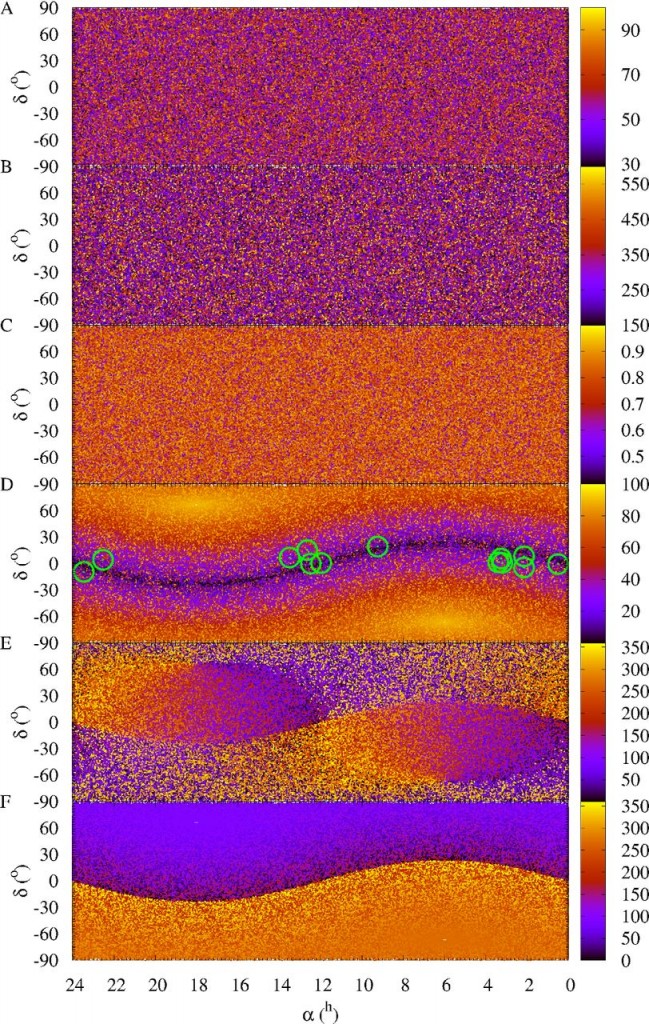 Figure 1: The results of the simulated solar system, showing the distribution of the computer generated KBOs. The plots show the locations of the KBOs as a function of: A. closest approach to Earth; B. semi-major axis; C. eccentricity; D. inclination; E. longitude of ascending node; F. argument of perihelion. The green circles show the observed KBOs.

Having quantified the  bias. they could then run a second test. This time, they tried to find out the distribution of KBO orbits that, given the bias that they now knew, we should expect to see. If this matched the observed clustering of the argument of the perihelion, then they would have a simple explanation for this apparent oddity. They found that the clustering couldn’t be explained by an observational bias— the oddly similar arguments of perihelion were real. Something had to be shaping the orbits of the KBOs.

With this established, the authors looked for possible explanations for these unusual orbits. The most likely explanation is the Kozai mechanism, where the orbit of a smaller object is shaped by a larger one, orbiting further away from the Sun. One particular feature of the Kozai mechanism is that argument of perihelion of the smaller object is held around a small range of values, exactly what was needed to explain the behaviour of the KBOs.

The astronomers who discovered 2012 VP133 had suggested just that, hypothesizing that the orbits of both their new KBO and Sedna were being shaped by an undetected super-Earth (a planet roughly twice the size of our own). The authors of this paper go one step further: The orbits of the KBOs can be best explained by two super-Earths, one at around 200 au and another at roughly 250 au. They would be locked in a orbital resonance, where the inner planet goes round the Sun three times for every two orbits of the outer world. The gravitational interactions between these planets and the KBOs would force them onto the unusually similar orbits that the finders of 2012 VP133 had observed.

So are there undiscovered planets waiting for us to find them? This would be particularly exciting as there are no super-Earths that we know of in the Solar System, but they appear to be abundant around other stars. However, the authors note that their conclusions have one huge caveat: small number statistics.

The calculations suggesting the existence of unseen planets is based on observations of only 13 KBOs, few enough that the clustering could be down to simple chance. If future observations find many more KBOs that don’t fit the pattern, then the case for missing planets will disappear. If, on the other hand, they do match what has already been seen, then their behaviour could be used to narrow down the locations of the unseen super-Earths, giving future astronomers the information they need to find them. The authors finish by noting that, if these super-Earths are there, then the effects of their gravity could be detected by the New Horizons spacecraft, currently approaching Pluto for our first close look at a KBO.

1. au=Astronomical Unit, roughly the distance between the Earth and the Sun.

AI: Artificial Illumination, that is.