Detecting small Kuiper Belt Objects (KBOs) is challenging even with state-of-the-art telescopes and massive collaboration surveys.  A tiny dot on a CCD could be a KBO, cosmic ray, asteroid, or anything else.  Distinguishing a KBO from the alternatives requires many nights of successive imaging of the same objects.  And astronomical instruments are expensive, costing upwards of tens of millions of dollars.

However, the paper in this Astrobite details how two amateur telescopes costing only $32,000 discovered the first KBO roughly 2 km in diameter. The goal of the work is not to directly compete with massive astronomical surveys, but rather to demonstrate the groundbreaking research can be done at significantly lower cost.

How do you find a KBO?  Don’t look for them.

There are two methods for detecting KBOs: direct detection and stellar occultations.  Direct detection uses powerful telescopes and relies on measuring slight movement of KBOs over different nights of observations.  The term “direct detection” is actually somewhat misleading because these objects are too far away and too small to be resolved by the telescope.  Every telescope has a point spread function, which determines how an exact point of light hitting the telescope gets “smeared out” on an image.  Most KBOs are so far away and so small that they just look the point spread function—you cannot see the actual shape or size of them.

A stellar occultation is a form of indirect detection.  To find a KBO using the stellar occultation technique, telescopes take high-speed images of large portions of the sky, monitoring the flux of many stars.  These flux measurements are turned into light curves, which show a flux of 1 for the background brightness of a star and dip toward 0 if the starlight decreases.  Occasionally, stellar light curves suddenly dip in flux, which can indicate a KBO has passed in front of the star. In other words, Earth falls in the shadow of a KBO.  This technique is similar to the transit detection method used by astronomers looking for exoplanets. 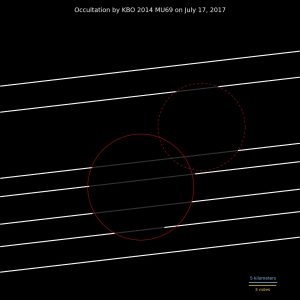 When measuring how long a stellar occultation lasts, researchers can use the speed of the Earth to compute the size of a “chord” across the KBO.  Figure 1 shows examples of many chords across KBO (486958) 2014 MU69, also known as Ultima Thule.  Each chord is the path of a star being blocked by the KBO.  With many chords of Ultima Thule, astronomers were able to determine its “snowman” shape before the New Horizons flyby at the beginning of 2019.

Another major benefit of stellar occultations is that the resolution is limited only by the frequency of the images.  The quality of the camera no longer matters. 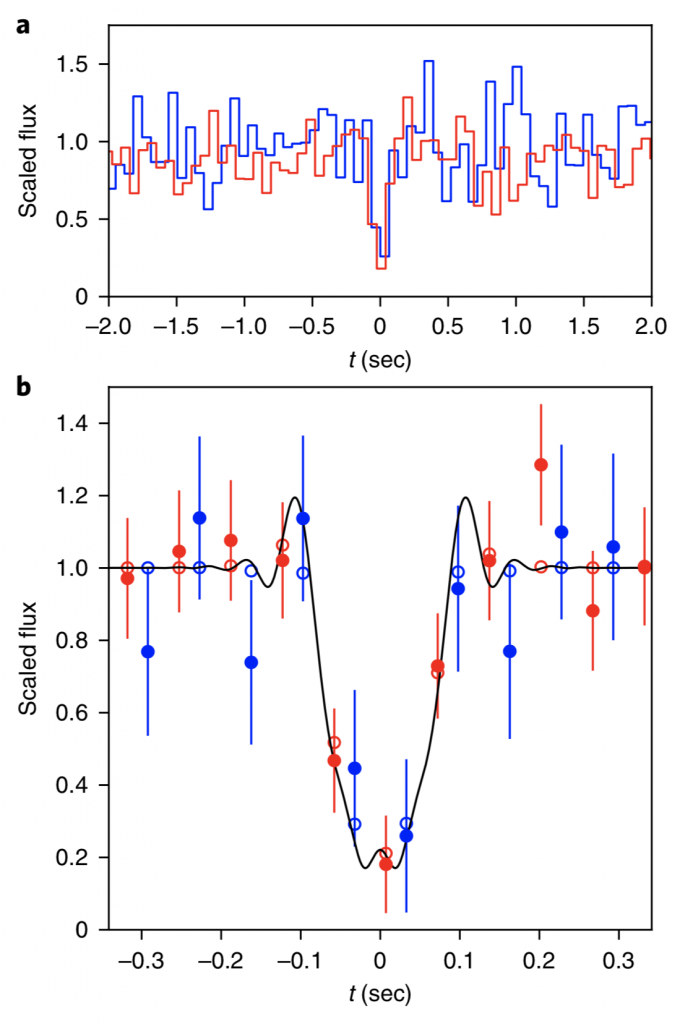 Figure 2. (a) Light curve of star with KBO candidate occultation. (b). Zoom-in on occultation. Red and blue are each the two OASES telescopes, indicating this flux drop is not caused by instrument error. Figure 2 in the paper.

The authors of today’s paper designed the Organized Autotelescopes for Serendipitous Event Survey (OASES) to detect small KBOs at low cost.  The two OASES telescopes, on Miyako Island in Japan, operated from June 2016 to July 2017, taking high-speed images of the sky every night and identifying candidate KBOs whenever flux from a star dipped below the background level of the image.  Figure 2 shows an example of one of these dips, which lasts much less than a second but is detected by both instruments simultaneously (blue and red). When both telescopes show the same dips at the same time, it means the dip was not caused by errors in the telescope or CCD—the light actually dimmed for a moment.

Simultaneous flux dips is still not enough for these researchers to say this is an occultation.  Starlight fluctuates due to scintillation in the Earth’s atmosphere, which is constantly changing density and wind patterns.  To exclude atmospheric effects as the cause of the flux decrease, the authors looked at four nearby stars at the same time to see if their light fluctuated.  Figure 3 shows the comparison of all five stars, indicating only one star changed during the event. This is how the authors are able to conclude the dips was very likely an occultation by a KBO. 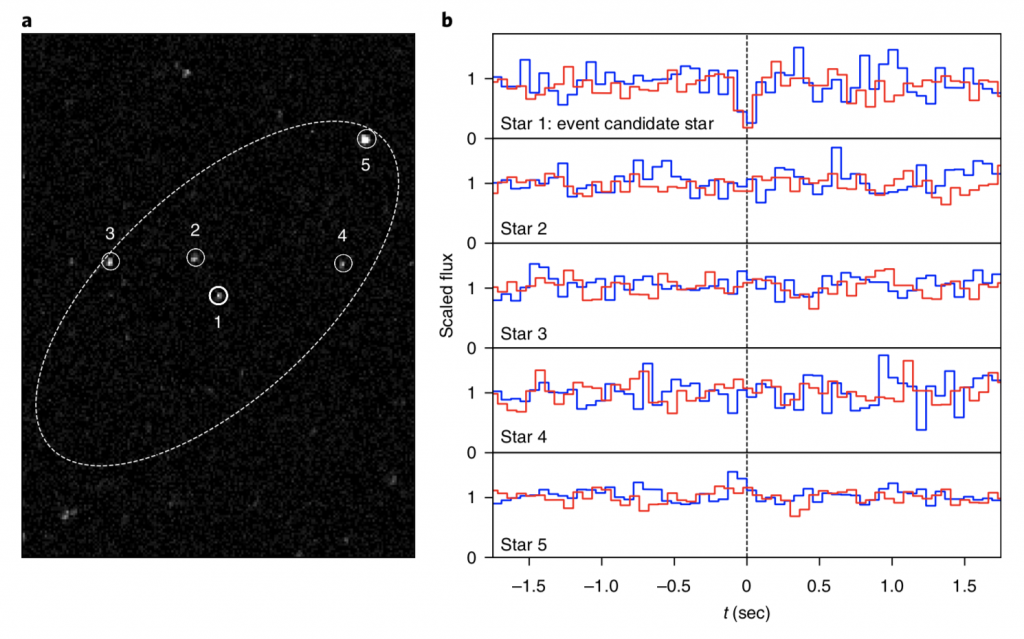 Figure 3. (a) Occultation candidate star and four nearby stars. The dashed line is the largest area of the sky that an atmospheric disturbance could affect simultaneously.  (b). Light curves of the five stars. Note that only one star shows the flux dip, which indicates atmospheric effects did not cause this dip, a KBO very likely did. Figure 3 in the paper.

In total the authors found 2431 candidates but the vast majority of these are false positives, ruled out by comparing the two telescopes and nearby field stars.  For the one actual KBO detected, its light curve was fit to a model, shown in black in Figure 2, which allows the researchers to calculate the impact parameter and estimate the diameter.  The impact parameter is the distance from the occultation chord to the center of the KBO, assuming it’s spherically symmetric. Because they only have one occultation chord, the authors cannot determine the shape of the KBO. However, they can use the spherical approximation to determine its diameter and the orbital speed of Earth to determine its distance.

They found the KBO to be about 33 AU from the Sun with a diameter of about 2.6 km, making this the first roughly kilometer-sized KBO discovered.  Many smaller KBO candidates have been discovered by stellar occultations but finding a kilometer-sized KBO is in some ways more challenging. The smaller and smaller an object gets in the Solar System, the more of them there are, meaning more opportunities for chance stellar occultations.  This is another indicator that the OASES setup and design has the capacity to perform high-impact astronomy.

In fact, this discovery reaffirmed the relationship between size and population of KBOs.  Theory predicts that the number of KBOs increases with decreasing radius, following a power law with an exponent around 3.  That means, for instance, there are roughly eight times more KBOs of 1 km radius than 2 km radius.  Agreement with previous literature gave the authors more confidence that their detection and methodology is sound.

OASES, as a proof-of-concept, demonstrates high-frequency, low cost astronomy certainly has the potential for novel discoveries.  The authors intend to continue improving their survey and integrate it with citizen science campaigns to discover more KBOs.

I am a Ph.D. candidate at Boston University, where I study planetary atmospheres. My dissertation research involves using new and archival stellar occultations to measure the upper atmospheres of Uranus and Neptune. My work aims to better understand how the atmospheres of the ice giants are heated to hundreds of degrees. I received my Bachelors in Physics from the University of Pennsylvania. Be sure to check out astro[sound]bites, the only podcast combining Astrobites posts with lighthearted discussion about the latest astronomy research. Find us on astrosoundbites.com, Apple Podcasts, Google Play, SoundCloud, and Spotify. In my free time, I enjoy cycling, exploring New England, and trying new wines.