Every object in the Kuiper Belt is a survivor. Some survived collisions that nearly smashed them apart and others survived nearby encounters with planets that could have sent them out of the Solar System forever. The luckiest accreted dust from their smashed neighbors or used a nearby passage of Neptune to fling them into a stable orbit. Of the many that survived, most survived alone.

A small number of known Kuiper Belt Objects (KBOs), however, contain companions that orbit around the mutual center of mass of the binary system. These KBO binaries can vary from equal mass binaries to a pebble orbiting a monolith. Astronomers study KBOs in part because their survival patterns give clues to the conditions in the early Solar System; the same is true about survival of KBO binaries. Today’s authors recently published work on a binary asteroid, (617) Patroclus-Menoetius, that survived unprobable transportation from the outer Solar System to an orbit near Jupiter.

The known KBO binaries divide into two populations: “cold classical KBOs” and “hot KBOs.” “Hot” and “cold” describe the orbits of the objects, not their temperatures. The cold classicals have stable, predictable orbits and formed right where they are found today without being disturbed by the planets. The hot KBOs have chaotic orbits, like a hot gas, and formed closer to the Sun. They were the lucky survivors of close encounters with planets and implantation into the Kuiper Belt during the first hundred million years of the Solar System. 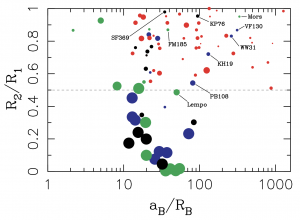 Figure 1 shows the differences between the hot and cold KBO binaries. Equal size binaries are toward the top and farther apart “wide binaries” are toward the right. All the cold classicals (shown in red) are near the top, meaning they have nearly equal size companions while the hot KBOs tend to be of unequal size.

The goal of the research presented in this paper is to simulate the history of KBO binaries to determine how each population evolved. As more binaries are discovered, better population statistics can then be used to estimate the conditions in the early Solar System that created them.

The authors started by using an N-body simulator called Swift that computes the position of every object orbiting the sun and records “encounters” between objects and planets. Think of it like binary dodgeball—the simulator counts the number of times each binary gets hit. But unlike dodgeball, a binary can be hit and flung apart by just passing close to the planet. 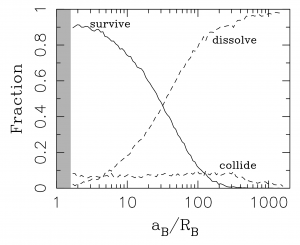 Figure 2. The results of the Boulder simulation showing the fraction of binaries that survive, dissolve, and collide as a function of aB/RB, the ratio of semi-major axis to radius. Tight binaries are far more likely to survive than wide binaries, while collision is about constant but always unlikely. Figure 3 in the paper.

With a list of these encounters throughout the history of the Solar System, the authors then ran a second simulation called the Boulder simulation, which determines the outcome of each encounter. There are three possibilities. 1) The binary survives and finds a new stable orbit, 2) The binary gets destroyed by smashing into the planet or itself, or 3) The binary is separated forever. Figure 2 shows the results from the Boulder simulation, which indicate that tight binaries are likely to survive but wide binaries are usually doomed to fall apart.

The output of these simulations is a prediction of the fraction of KBO binaries created early in the Solar System that would be able to survive to today. The last step in the paper was to compare those results to what is actually observed today.

To make this comparison the authors assumed the cold classical KBOs are about the same as when they were created because they were always too far from the planets to have any encounters. The hot KBOs, on the other hand, had many encounters and collisions. Therefore they took the cold classicals and simulated how they would change according to Figure 2, which was then compared to the hot KBOs in Figure 3. 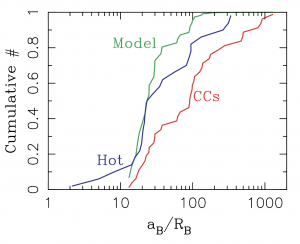 Figure 3. Cumulative distribution of hot KBOs in blue, cold classicals in red, and the “model” of predicted hot KBO survival in green. The X-axis is again the ratio of semi-major axis to object radius. The model was expected to be in close agreement with the hot KBOs, but it disagrees significantly at aB/RB > 100. Figure 13 in the paper.

There are many possible explanations for these results. The simplest may be that the “hot” and “cold” classification system for KBO binaries fails to capture what’s really going on in the Kuiper Belt. The authors hope future studies and observations of KBOs will mitigate this concern. Some theories hold that the planets formed much closer to the Sun, which, if true, would change the binary-planet interactions used in these simulations. It’s also possible that the cold classicals did not form where they are now and also survived precarious conditions.

The reality for planetary astronomers is there so much they don’t know about the history of the Solar System. The best researchers can do is to use all available clues to fill in the gaps little by little, and this paper adds binarity as a property of Kuiper Belt Objects worth future study. It may be that binarity is only significant insofar as to corroborate studies of other KBO properties, but that doesn’t mean it should be overlooked as more powerful telescopes and farther traveling spacecraft begin missions over the next few decades.

I am a Ph.D. candidate at Boston University, where I study planetary atmospheres. My dissertation research involves using new and archival stellar occultations to measure the upper atmospheres of Uranus and Neptune. My work aims to better understand how the atmospheres of the ice giants are heated to hundreds of degrees. I received my Bachelors in Physics from the University of Pennsylvania. Be sure to check out astro[sound]bites, the only podcast combining Astrobites posts with lighthearted discussion about the latest astronomy research. Find us on astrosoundbites.com, Apple Podcasts, Google Play, SoundCloud, and Spotify. In my free time, I enjoy cycling, exploring New England, and trying new wines.