Sometimes the little things in life are the most important.

With several hundred thousand known asteroids and a few thousand known Kuiper Belt objects, astronomers are just starting to understand the Solar System’s complex history. However, the early days of our Solar System largely remain a mystery (and by early days, I actually mean the first several hundred million years). Various ideas have been proposed to explain how the planets formed and arrived at their current orbits. Each theory predicts variations in observable features of the Solar System, such as how small bodies are distributed. All generally agree that the giant planets underwent some degree of migration, yet none satisfactorily explain what we observe. Today’s bite throws another wrench into the story. The subject? A peculiar binary asteroid named (617) Patroclus-Menoetius. 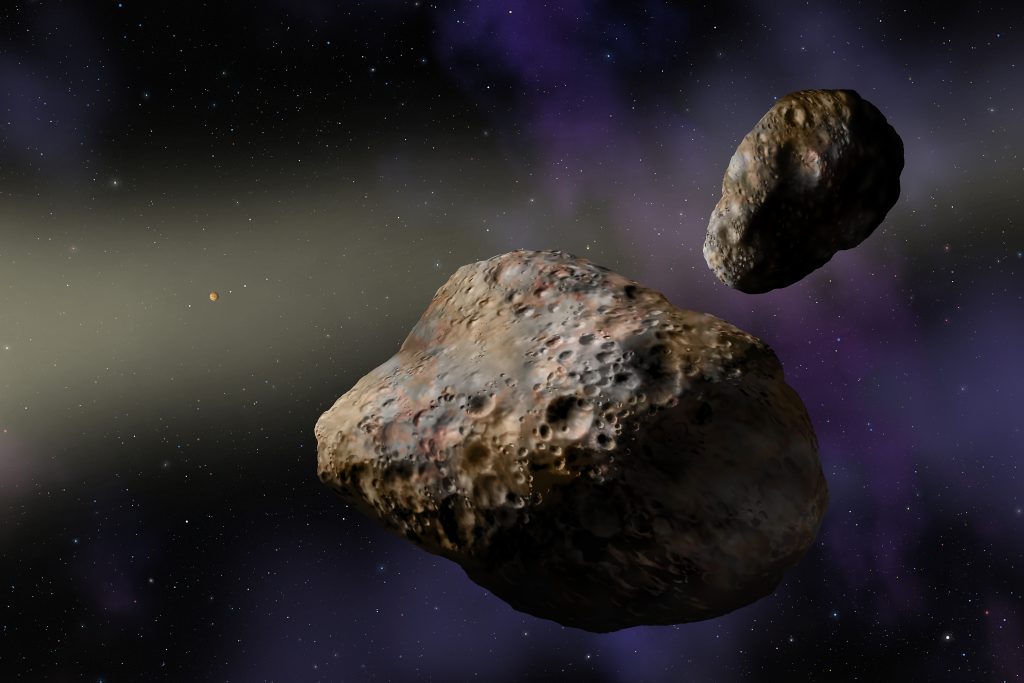 (617) Patroclus-Menoetius, hereafter P-M, is a system of two ~110-kilometer-sized Jupiter Trojan asteroids (objects that orbit 60 degrees ahead or behind Jupiter with the same semi-major axis as Jupiter). Because they are nearly equal in size, Patroclus and Menoetius co-orbit around their mutual center of mass. Such binaries likely formed when the planetesimal disk was still collapsing down from “pebbles” and pairs could easily form, making them some of the earliest relics of the Solar System. They are powerful probes of dynamical encounters throughout the Solar System’s history since they can easily be disrupted (e.g. pulled apart or forced to collide) by a larger mass, like Jupiter. The fact that P-M has survived for 4.5 billion years, and so close to Jupiter no less, places strong constraints on conditions early in the Solar System’s history.

P-M’s survival is not all that makes it weird — it is also a relatively compact binary with an average separation of only ~670 km. Jupiter Trojans are thought to have formed much farther out than Jupiter in a planetesimal disk 20-30 astronomical units (AU) from the Sun, scattered inward during a period of dynamical instability, and subsequently captured by Jupiter’s Trojan regions. P-M’s very existence means that it survived 1) collisions within the disk at 20-30 AU that would have ground down one or both members of the binary and 2) transport from its initial location at 20-30 AU to its current location at 5.2 AU.

Simulating Binaries in the Solar System

Today’s authors used N-body simulations of the Solar System to determine P-M’s likelihood of meeting both conditions, given several different versions of the early Solar System. The authors first tested the plausibility of condition 2 above, examining the survivability of binaries transported from 20-30 AU to the Jupiter Trojan regions at 5.2 AU. They found that survivability strongly depends on the separation of the binary. Most tight binaries (components separated by less than 1500 km) with P-M-like masses survived in the simulations while most wide binaries did not. Luckily, P-M’s separation of ~670 km falls well within the “tight” category.

However, P-M has to have survived both conditions above. The authors next tested survivability against collisional grinding in the early disk, when impacts were much more common due to the increased object density. Using an initial disk mass of 20 Earth-masses (derived from previous simulations), they find that the number of objects larger than 100 km that survive through the disk’s lifetime (400-700 million years) is an order of magnitude smaller than predicted by models like what they used to test condition 2 above. Furthermore, the survival probability for P-M-like binaries is about 0.2% if the disk’s lifetime is longer than 400 million years because even relatively small, non-catastrophic impacts can disrupt the binary system. Increasing the initial disk mass, and therefore the total number of objects, only makes the problem worse since the disk would grind faster. The only option left is that the disk’s lifetime was much shorter than previously thought. 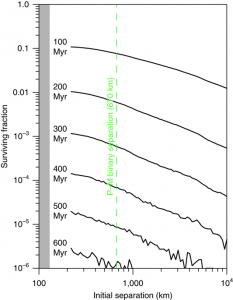 Figure 2. The dependence of the binary survival rate on the planetesimal disk lifetime. Only lifetimes of ≲100Myr result in a significant fraction of binaries surviving collisional processes in the disk. Figure 2 in the paper.

Nesvourný et al. find that the survival of P-M is virtually impossible unless the planetesimal disk’s lifetime was less than 100 million years (Figure 2). That is, the migration of the giant planets and the subsequent dynamical instability that caused the dissipation of the planetesimal disk must have happened within the first 100 million years of the Solar System’s history. That spells trouble for current explanations of the Late Heavy Bombardment (LHB), a period of greatly increased impact rate recorded on the surfaces of terrestrial bodies (e.g. the Moon) that occurred 400-700 million years after the Solar System’s formation. The LHB was previously linked to the dynamical instability triggered by the giant planets’ migration, yet today’s paper suggests that the migration must have happened much sooner than previously thought.

So what caused the LHB? The truth is that we still don’t know. Constraints provided by the P-M system can only tell us that the LHB wasn’t caused by planetesimals scattered inward during the giant planets’ migration (though this astrobite explores some other ideas). There is one thing we do know, though: Trojan asteroids are some the most important objects to study if we want to understand the evolution of the Solar System. Luckily, we’ll soon have an opportunity to study several Jupiter Trojans up close with the launch of NASA’s Lucy mission in 2021. Fortuitously, Lucy’s final target will be none other than (617) Patroclus-Menoetius in 2033 and I, for one, cannot wait to see what it discovers!