Asteroids have a bad reputation. They may have wiped out the dinosaurs, and they have threatened the survival of humanity in many terrible movies.

Until today’s featured paper, asteroids were also blamed for the Late Heavy Bombardment (LHB, for short) – a period of time in the early solar system when the Moon, the Earth, and the other rocky planets were hit with an unusually high amount of impactors from a variety of material in space. It lasted from the Sun’s formation 4.6 billion years (Gyr) ago until the impact that created the Orientale crater on the Moon 800 million years later (3.8 Gyr ago). Planetary scientists working on the Apollo missions in the 1960s first hypothesized the LHB when astronauts brought back impact melt rocks from various craters that unexpectedly all dated back to this time. The idea was later extended to include the rest of the inner solar system when planetary scientists found similar cratering histories on each of the rocky planets. These LHB-era impacts are believed to have been caused by some combination of asteroids (from the asteroid belt), comets (from the Kuiper Belt and beyond), and leftover material from the formation of the inner rocky planets. However, it is still not clear which of these three sources was the main culprit.

To address one part of this issue, Nesvorny et al. – the authors of today’s paper, ask: Were there enough impacting asteroids to account for all of the craters on the Moon from the Late Heavy Bombardment?

How did asteroids end up impacting the Moon?

The leading idea for the source of asteroid impactors during the LHB is that they did not come from the main asteroid belt that exists today. Instead, they originated in what used to be the inner part of the belt – called the “E-belt” – that spanned from 1.7 to 2.1 AU, but became extinct (“E” is for Extinct!) after interacting with the planets in our solar system before they settled into their current orbits.

During this time period, the planets were not located where you think of them today. In the Nice model, Jupiter started out at 5.35 AU (compared to 5.2 AU today) and Saturn at 8.40 AU (compared to 9.5 AU today). Then, as Jupiter migrated inward and Saturn moved outward – both by about 0.04 AU – they moved from almost being in resonance to exactly in resonance. At this point, Saturn began to orbit around the Sun two times for every one time that Jupiter completed an orbit. This perfect alignment created complete chaos! Jupiter and Saturn quickly migrated towards their current locations, and in the process, they flung Uranus and Neptune much further away from the Sun, while also ejecting asteroids out of the asteroid belt. Many of these asteroids fled for the inner solar system, where they could then impact the Moon, the Earth, and the other inner planets. 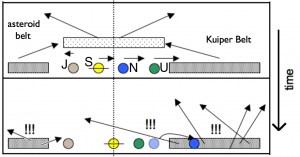 Figure 1. Nice Model: Evolution of the early solar system. When Jupiter (J) and Saturn (S) reached a 2:1 resonance (dotted line), they ejected asteroids out of the asteroid belt and pushed Uranus and Neptune away. There is a decent amount of evidence that something like this occurred (albeit, there are competing models), although it is unknown whether planet migration during the Nice model is directly responsible for the LHB. Adapted from Rivkin et al. 2010.

Nesvorny et al. test whether asteroids could be responsible for the LHB by simulating the orbital evolution of a full belt of asteroids that stretches from 1.7 to 3.3 AU with a wide range of low eccentricities (0.0 to 0.4) and low inclinations (0 to 20 degrees). Concurrently, they also integrate the orbits of all of the planets (except Mercury to save computation time) according to how they evolve in the Nice model. They run this simulation from not too long before Jupiter and Saturn fall into resonance to the present day.

As Figure 2 shows, Nesvorny et al. find that there are not enough large asteroids to explain the number of known impact craters on the Moon. Thus, asteroids from the asteroid belt could not have been responsible for the majority of the impacts during the LHB. 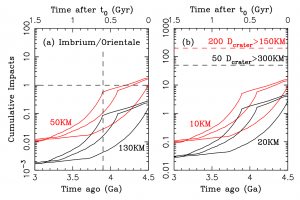 Figure 2. Total number of impacts on the Moon above a given size (left: 50 km, 130km; right: 10 km, 20 km) for three simulations. Left: The Imbrium crater was created by a 130-km impactor, but not even 1 asteroid that size hit the Moon throughout its history in the simulations. Right: There are 200 craters with a 150-km diameter or more on the Moon, each of which was created by a 10-km impactor. However, less than 20 asteroids that size hit the Moon.  Figure 20 from the paper.

Recent work has also explored whether comets could explain the LHB-era impacts on the Moon, but found that the rocks returned from the Apollo missions do not have the right chemical make-up – specifically, oxygen isotope ratios – to match up with comets. This leaves leftover material from when the Earth, Mars, and other inner planets formed as the most likely remaining explanation for the impacts during the Late Heavy Bombardment.

The lead author, David Nesvorny, mentions that he has submitted another paper (with Alessandro Morbidelli and several other planetary scientists) that validates the rocky planet leftovers as the main cause of the Late Heavy Bombardment. Hopefully when that paper is published, I can write another Astrobite that more conclusively finishes this important part of the story.