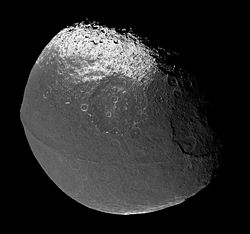 Iapetus, Saturn’s third-largest moon, is just weird. It has one hemisphere that’s ten times brighter than the other hemisphere, an orbit with a high inclination but a low eccentricity, and a 20-km-high, 70-km-wide equatorial ridge extending almost all the way around the moon. We talked about Iapetus’ inclination/eccentricity problem here just a couple weeks ago, but now we’re going to talk about that ridge. Today’s paper does not ask how the ridge formed — though there are some interesting theories about that — but why it’s still there. The ridge is likely almost as old as Iapetus itself, which probably formed at roughly the same time as Saturn. The Solar System has been through a lot of changes since then — a lot of very violent changes. And yet the ridge, though battered, is still there. What can this tell us about the history of the Solar System?

One of the most prominent theories of Solar System formation is the Nice model, named after the city in France where it was developed. The Nice model proposes that the giant planets originally formed closer to the Sun, then reached an instability about 700 million years later when Jupiter and Saturn crossed their mutual 2:1 mean motion resonance, which pushed the giant planets rapidly outwards. This migration caused a large number of rocky and icy planetesimals from the Solar System’s debris disk to smash into the outer planets and moons. The Nice model has a lot of parameters and moving parts, but like any good scientific hypothesis, it makes a lot of testable predictions. The authors of this paper focused on one parameter predicted by the Nice model: the mass of the Solar System’s debris disk at the time of the migration-induced bombardment. 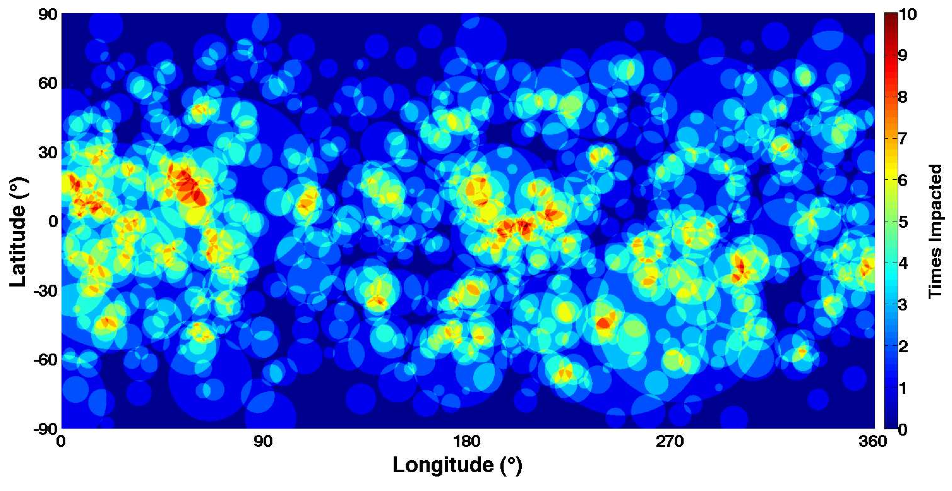 Fig. 1: Map of Monte Carlo simulated craters on Iapetus after a bombardment using Nice model parameters. Less than 1% of the ridge would survive this level of bombardment.

The authors used a Monte Carlo method to simulate the bombardment history of Iapetus, varying the size distribution of the falling debris and the total mass of material hitting Iapetus. Then they compared their results with Iapetus’ crater record. The Monte Carlo results that match the observed crater density best had a total bombardment mass of only 4-20% of the mass predicted by the Nice model. The authors also included an equatorial ridge in their simulations, and compared the state of the simulated ridge with that of the observed ridge. The actual ridge on Iapetus is still standing and clearly observable, but it’s not completely intact. The Monte Carlo results that produced a similar ridge had a total bombardment mass of about 7-30% of the mass predicted by the Nice model. This overlaps nicely with the results from the crater record, so the authors conclude that Iapetus was bombarded by a much lower mass of material than the Nice model predicts. 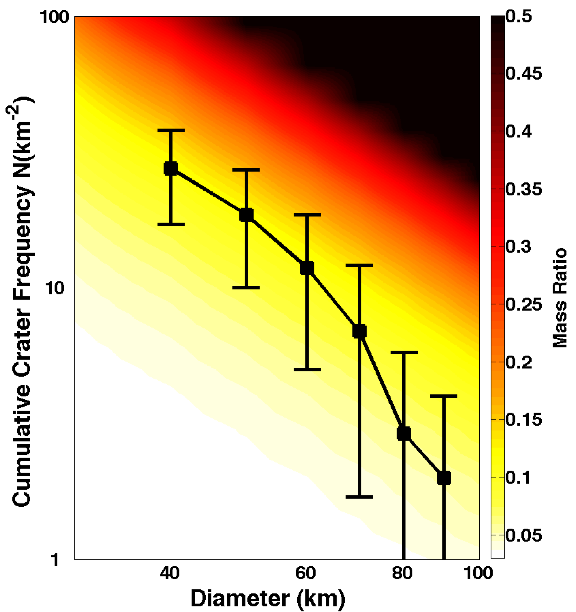 So why is there a disagreement with the Nice model? One possibility is that Iapetus may have formed elsewhere in the Solar System and only been captured by Saturn recently, thus missing most of the bombardment. But other evidence suggests that Iapetus formed with Saturn. So perhaps the results of this study imply that the Nice model is incorrect. In fact, more recent studies of Solar System formation, including the Nice II model, predict that the outer planets and their moons didn’t suffer as much bombardment from the disk because the planetesimals  have higher velocities, and therefore tend to zoom by the planets rather than get pulled into a collision course by gravity. The authors find that their results agree with these more recent models. Thanks to Iapetus and its strange but long-lasting ridge, we now have more evidence to support the latest models of the history of our Solar System.

Where do hypervelocity stars come from?