Check out Monday’s Astrobite for a complete overview of Paper I here.

Welcome back to Fomalhaut, a star system we cover a lot here at Astrobites! Fomalhaut is famous for having a debris disk that looks like the Eye of Sauron, and for Fomalhaut b –  a possible planet that may or may not lie at the edge of that disk. Residing in Piscis Austrinus (the Southern Fish), Fomalhaut is named after the Arabic “fum al-hut,” meaning the “mouth of the whale” because of its location in the constellation. It is also the 18th brightest star in the sky, and one of the ten closest stars more massive than the Sun.

Unlike many of the other stars near our solar system, Fomalhaut is still young enough at 440 Myr old to have a prominent debris disk – a thin ring of dust that is similar to our solar system’s own Kuiper Belt, except 1000 times more massive! This makes Fomalhaut an excellent testbed for studying if and how planets are still sculpting the size and shape of debris disks at this middle stage of solar system evolution when planets have already formed, but may still not have settled onto their final orbits.

When the Atacama Large Millimeter/sub-mm Array (ALMA) first turned on in 2011, one of the first scientific results published was an image of half of Fomalhaut’s debris disk that inspired this Astrobite. That was taken in the very first observing cycle when ALMA only had 16 antennas operational. In today’s twin papers, Meredith MacGregor, Luca Matrà, and their collaborators take advantage of ALMA’s 43 currently operational antennas to take a much higher resolution image of the full debris disk to uncover two new exciting results about the Fomalhaut system. 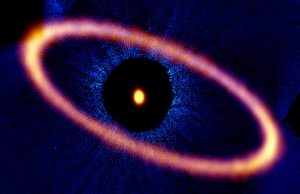 Figure 1. The latest image of the full Fomalhaut debris disk taken with ALMA at 1.3 mm (orange). The blue background makes the image look cooler, but is just scattered starlight and not part of the disk. The star at the center is masked. Credit: ALMA / ESO / NAOJ / NRAO / M. MacGregor (Background: NASA / ESA / Hubble / P. Kalas / B. Saxton / AUI / NSF.)

A Clash of Glows

In the first paper led by Meredith MacGregor, the authors measure how Fomalhaut’s disk glows in order to determine its eccentricity. Just like a planet in an eccentric orbit, the disk has a pericenter – the point that is the closest to the star (top-left of Fig. 1), and an apocenter – the point that is the furthest away (bottom-right of Fig. 1). In previous images of Fomalhaut at very small wavelengths, the disk appears brighter at pericenter than apocenter (see Figure 2). That is because the disk material closer to the star gets heated to a higher temperature, and hotter objects radiate more light. However as you can see in Figure 1, at larger wavelengths above 0.5 mm, this “pericenter glow” goes away and is instead replaced by the opposite effect: “apocenter glow.” 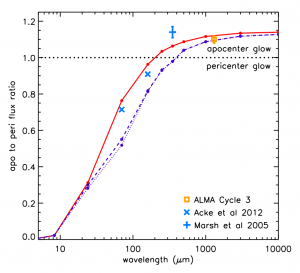 Figure 2. Two models of the expected ratio of flux at apocenter to flux at pericenter, across a range of wavelengths (red and purple lines). Blue points mark other observations. The orange square marks this paper’s result, indicating the first measurement of apocenter glow with small error bars. Fig. 3 from Paper I.

There is no way the disk is hotter at apocenter than pericenter. However near 1 mm, the observed emission is very far from the peak blackbody emission at the Wien peak wavelength. As a result, the temperature has less of an impact on the disk’s brightness. This allows differences in density to dominate how bright the disk appears instead. Where is the disk the densest?

According to Kepler’s 2nd law, “equal arcs of time in an orbit sweep out equal areas.” In order for that to be true, particles in orbit must spend more time away from their star at apocenter. As a result, an eccentric disk should be denser at apocenter. This is a neat way to apply something that is often one of the first things you learn in your Intro to Astronomy course to active research!

A recent paper (with Astrobiter Erika Nesvold) showed that the ratio between apocenter and pericenter brightness should scale with “1 + the eccentricity,” which means determining that ratio would tell us the eccentricity. With their observations of Fomalhaut at 1.3 mm, MacGregor et al. make the first concrete measurement of apocenter glow and use it to measure the disk’s eccentricity to be 0.12 (+/- 0.01). Knowing this precise value can be useful for making models of the disk’s evolution, which could be used to determine if Fomalhaut b is actually a planet or if there are other unseen planets in the system waiting to be detected.

A Game of Ice

In the second paper led by Luca Matrà, the authors measure the amount of CO gas in the disk in order to probe the system’s population of icy objects – better known as comets. Although Fomalhaut is young, Matrà et al. show that it is still much too old for any CO gas from its primordial disk to survive over 400 Myr of intense UV radiation from interstellar space. The CO gas they observe must have originated recently from the continual (steady-state) outgassing of CO and CO2 ice embedded in comets, which may occur if they collide with each other on a regular basis. 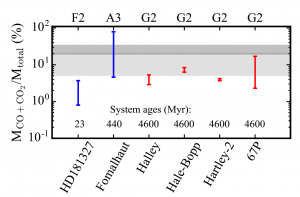 The authors use a model of the steady-state outgassing that they developed in a previous paper to extrapolate the mass of the observed CO gas into the CO and CO2 ice fraction of the comets needed to explain that observed amount of CO gas. They find that between 5 to 75% of the cometary sources of the outgassing must have been CO or CO2 ice. This is a wide range due to the uncertainty in the observed amount of CO and other variables, but it is still consistent with the range of 20 to 35% that would be expected if the comets formed in the outer part of the system.

That range of ice fractions is also consistent with the values measured for four of our solar system’s own comets (including Halley; see Figure 3). This is the first sign of evidence we have that comets in other solar systems can be made up of the same material as comets in our own solar system, suggesting that they may have a similar origin!

These new results demonstrate that Fomalhaut is still one of our best sources of information on the formation of planetary systems. Don’t be surprised to see this debris disk back on Astrobites in the future!