Title: A Complete ALMA Map of the Fomalhaut Debris Disk

The Fomalhaut debris disk is one of the most recognizable circumstellar disks—mainly because images of it bear an uncanny resemblance to a certain tyrant of Middle Earth. If you are completely unfamiliar with The Lord of the Rings, just click this link, straight from the Wikipedia page on the Eye of Sauron, and observe how oddly similar this movie screencap is to observations of a debris disk roughly 7.6 parsecs away. 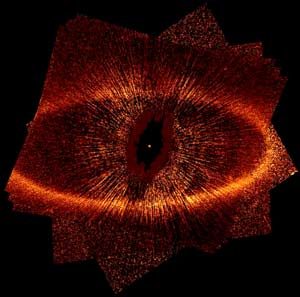 The Fomalhaut system contains a dusty-debris disk, which gives the images their distinctive glowing eye appearance. Because of its proximity and unusual features, this debris disk is quite well studied, but, as the authors of this paper demonstrate, there is still much more we can learn from Fomalhaut. It has been shown to have a companion, Fomalhaut b, on a highly eccentric orbit. The interaction between Fomalhaut b and the debris disk is what makes this system so intriguing; when Fomalhaut b was first discovered, it was thought to be a massive planet, however new observations in today’s paper cast doubt on this hypothesis. Given Fomalhaut b’s lack of brightness in the optical and unusual brightness in the infrared, the authors of this paper suggest that Fomalhaut b is likely a giant dust cloud.

In this paper, the authors use observations from the ALMA (Atacama Large Millimeter/submillimeter Array) observatory to reveal the structure of the Fomalhaut disk, and observe an unusual glow in the disk corresponding to the apocenter of the system. The apocenter of an eccentric orbit is the point where the orbiting object is furthest from the star; the pericenter is when the orbiting object is at its closest approach.

This apocenter glow has previously been theorized, but has never before been observed in any system, and is a result of the the large eccentricity of the Fomalhaut ring. This causes increased surface density at apocenter. The velocity of the debris is slower when it’s further from the star (at apocenter) compared to when its close (at pericenter). This produces an overdensity of material at apocenter, so that, at millimeter wavelengths, the dust grains emit more brightly, and dominate the emission: the apocenter appears brighter. This can be seen in Figure 2.

Figure 2: These ALMA images of Fomalhaut show the apocenter glow. The difference in brightness between the North-west (apocenter) and South-east (pericenter)  sides reflects the surface density distribution of the disk. The image on the left is just the ALMA image while the image on the right is corrected by the HST images. On the right, the apocenter glow is clearly visible.

With this new information on the structure, size, and distribution of grains within the debris disk, the authors create a model for the debris disk with an inner edge of 136.3 AU and width of 13.5 AU. The total dust mass of the disk is 0.015 Earth masses, which is in agreement with previous models. They find the eccentricity to be 0.12, which makes Fomalhaut one of the most eccentric dust rings yet observed. The authors note that it is possible that there is another structure at a radius of less than 10 AU, given that ALMA would be unable to resolve these structures at such a distance.

The authors resolve the complete Fomalhaut outer debris disk  with ALMA. These observations of Fomalhaut’s dust continuum emission reveals a narrow, eccentric ring surrounding the system. The apocenter glow, seen in the difference between the North-west and South-east brightness of the disk, more thoroughly constrains the dust grains that make up the disk by providing a density map of the system. These authors have now uncovered a new piece of what drives the structure of circumstellar debris, with the first ever observation of apocenter glow. With this new observation, soon we may find apocenter glow in other systems, and then more thoroughly constrain their parameters. Fomalhaut’s newfound glow and the information that reveals about the structure and natures debris disks honestly makes the Eye of Sauron seem a bit boring in comparison.

Look out for another astrobite this week with information on the composition of Fomalhaut’s debris disk!