A neutron star in the Eye of Sauron?

Article: A Test of the Neutron Star Hypothesis for Fomalhaut b

Status: Published in the Monthly Notices of the Royal Astronomical Society, open access 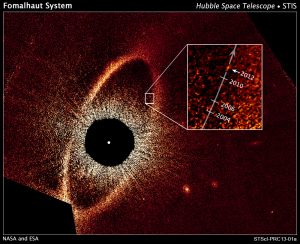 Fomalhaut, its dusty disk and the exoplanet candidate Fomalhaut b imaged by Hubble. The ticks in the zoomed-in square are the positions of the planet in different years. Credit: NASA and ESA

When you go somewhere with relatively dark skies, you can pull up your smartphone and that handy planetarium app, look for the star Fomalhaut in the constellation of Pisces, and then point it to your friend and say: You see, there is a planet orbiting that star, and we have literally seen it with our telescopes! — But there is a catch: The little blob of light which was directly observed by Hubble is weird, and it doesn’t really look like a planet. In fact, some astronomers have proposed it could be a neutron star. Gasp!

The return of the conundrum

Fomalhaut is a very bright, visible to the naked eye blue star with twice the solar mass, sitting 25 light-years away from Earth. It is also quite a busy place: There are other two smaller stars orbiting it, but I’d wager many people know Fomalhaut because of its famous dust ring — the reason why the star became known as the Eye of Sauron — and its exoplanetary companion, Fomalhaut b. Well, maybe exoplanetary, and maybe a companion.

After the first detection of Fomalhaut b in 2008, astronomers were thrown off by the infrared emission of the planet, of which there was none (see this bite by Lauren Weiss for a summary on that). We expected it to emit strongly in longer wavelengths because that’s how planets are supposed to look like. Furthermore, recent observations show that its orbit is tilted in relation to the dusty disk, which is unexpected. This led astronomers to hypothesize that the observed speck of light in the disk could be just a foreground or background object that, simply by chance, happened to be aligned with Fomalhaut.

The planet candidate cannot be a regular star because it would be brighter (if foreground) or extremely reddened by galactic dust (if background); it also cannot be a white dwarf, otherwise it would have to be traveling unrealistically fast through the Galaxy to fit the observed motion of Fomalhaut b. The only object that could reasonably fit the observational constraints is a neutron star. They are very faint and blue, which is a good match, and they also emit a crazy amount of X-rays. In today’s paper, the authors explore the possibility of Fomalhaut b being a neutron star by observing the system with the Chandra X-ray Observatory.

I’m not going to beat around the bush here: They did not detect an excess of X-ray emission from the Fomalhaut system. However, as anti-climatic as this is, a non-detection is still a valuable piece of information because it provides upper limits on the X-ray emission. By applying the principle of charity to the neutron star hypothesis, we can objectively evaluate how likely it is in the face of the non-detection constraint.

Using this upper limit, the authors show that, if Fomalhaut b is in fact a neutron star, it would have to: i) have a temperature lower than 91,000 K; ii) be located closer than 44 light-years; and iii) be older than 10 million years (see Fig. 1 below). In other words, it would be the coldest and closest neutron star ever observed, by orders of magnitude, and a pretty old one at that! To say the least, the neutron star hypothesis is a very far fetched possibility. 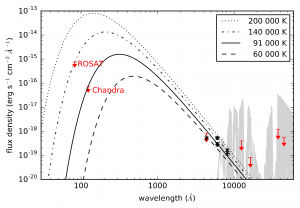 Figure 1. Models of neutron star spectra (black curves) plotted against the observed brightness of Fomalhaut b (black points) and upper limits of high-energy and infrared emissions (red symbols). The best fit for a neutron star is one with temperature 91,000 K and distance 44 light-years. The grey region is the spectrum of a cold giant planet.

The fellowship of the dusty ring

So, what then? What could possibly explain Fomalhaut b, if not an unlikely neutron star? The authors go back to a previously proposed explanation: The exoplanet itself could have a dusty ring system, similar to Saturn, that reflects the blue light from the main star, making the planet look bluer than expected (see Fig. 2 below). Although this hypothesis has also been met with skepticism by the astronomical community, observations in the ultraviolet wavelengths may help to clarify the nature of this mysterious object. 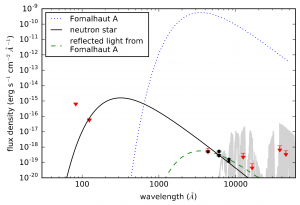 Figure 2. The observed brightness of Fomalhaut b in the optical and infrared regions (towards longer wavelengths) match the model of a ringed planet (green dashed curve) reflecting light from the main star (blue dotted curve).