Status: To be published in MNRAS.

When did scientists measure the first evidence for the existence of exoplanets? If you said 1917, you are (arguably) correct! In 1917, a man named Walter Adams recorded a spectrum of van Maanen’s star. This turned out to be a “polluted white dwarf”: a white dwarf whose atmosphere, relatively unusually for a white dwarf, shows traces of elements heavier than helium in the stars atmosphere. Very little was known about white dwarfs at the time — indeed the term “white dwarf” was not coined until five years later — so the significance of this was not realised. Today though, it is known that this material in the white dwarf’s atmosphere cannot be native to the white dwarf — that it is evidence for some rocky object (a planet or asteroid) breaking apart and falling onto the surface of the white dwarf.

The reasoning is as follows: compared to main sequence stars, white dwarfs are relatively simple. They have no fusion to stir things up, so their elements quickly become stratified by weight, with heavy elements sinking towards the centre while the lightest elements (hydrogen and helium) float on top. We can only see the elements that are near the surface, so we don’t expect to see heavy elements in white dwarfs that have reached equilibrium. Polluted white dwarfs such as van Maanen’s star are old enough to have reached this equilibrium by now, but they still show these heavy elements; therefore, this material must have fallen onto the star’s surface since it became a white dwarf. The explanation is that this material comes from an exoplanet that until recently was orbitting the white dwarf. When the planet drifts too close in, the white dwarf’s gravity tears the planet apart. We’re left with a cloud of rubble that can fall onto the star’s surface and provide these heavy elements that we see.

It’s worth saying that, though widely believed for a long time, the process remained theoretical until just last year, when a system was discovered in which the disintegrating rocky objects are visible.

Today’s paper, by Jay Farihi et al, presents findings about a notable example of these polluted white dwarfs, a star named WD1536+520. By generating model spectra with different amounts of each heavy element and comparing those to measured spectra of WD1536+520, the team were able to measure how much of each element is in the white dwarf’s atmosphere. This allows them to estimate the composition of the object being accreted. They measured 11 heavy elements, and found that for most the relative amounts agreed with a source object with a composition roughly similar to that of the Earth (see Figure 1). They also found an unusually high amount of hydrogen for a helium-dominated white dwarf, which they suggest may have originated as water in the accreted object. 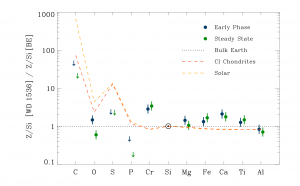 Figure 1: Measured amounts of carbon, oxygen, sulphur, phosphorus, chromium, magnesium, iron, calcium, titanium and aluminium, relative to the amount of silicon, for two cases where we assume that accretion has just started or that it has been going on long enough to reach an equilibrium. These are shown relative to the Earth’s composition, so that 1 = the same fraction that the Earth has. Down arrows represent upper limits. This is Figure 2 from today’s paper.

They also estimate that the material falling onto the star is coming in at 4200 metric tonnes every second, which is among the highest for any known polluted white dwarf. At a recent conference this astrobiter attended, Jay Farihi presented a white dwarf at the other end of the scale, a star onto which matter falls at 0.25 kg per second, which he described as “a quarter of a chicken”. By a similar metric, today’s star grows by about ten sperm whales every second.

It can be useful to compare the amount of oxygen to the amount of other elements. Oxygen is rarely found in its molecular (O2) form, so the oxygen that we see in the white dwarf will have come almost entirely from metal oxides (essentially rust). In the Earth’s crust, most metal is also found in oxide form. If we assume that all the metals we see come from oxides, we can calculate a theoretical “oxygen budget” which we can then compare to the actual amount of oxygen we detect. Today’s authors did this, and found that the system contains less oxygen than the “oxygen budget”. The most probable reason for this is that some metal, most likely iron, existed as a pure metal rather than an oxide in the source planet. In the Earth, we find pure iron mostly in the planet core, so this could be evidence that the disintegrated planet this material came from had a substantial iron core like our own.

The method used in today’s paper is one of the few ways to measure exoplanet compositions that we know of, and Farihi’s paper is just the latest in a series of such measurements for different white dwarf systems. Several previous papers have been written about on astrobites. Each new study brings another data point for studying exoplanet compositions, so there is sure to be plenty of interesting science to come from this. Keep listening!