Earlier this year, Astrobites featured a post about polluted white dwarfs: white dwarf stars where heavy elements are observed near the surface. 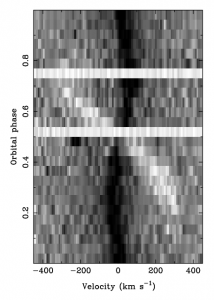 Figure 1: The trailed spectrum for this target. As described in the text, the black and white curves show the white dwarf and companion, respectively. Note that the two horizontal white stripes are timesteps with no data. Figure 1 (right) in the paper.

The binary companion to this dwarf is identified from some very pretty radial velocity data. The data is shown as a ‘trailed spectrum’ of the Hα line in Figure 1. A whole series of high resolution spectra are taken and displayed against time (along the y-axis). On the x-axis is the frequency, converted into a relative velocity. Each spectrum is plotted as a separate horizontal strip, with the lighter colours representing higher counts at that wavelength. We see a very white S-shaped trace where the companion is strongly emitting in Hα. A much narrower, backwards, black S-shape shows the white dwarf, which is absorbing Hα radiation. The two are out of phase, showing that they orbit each-other. In some sense, you can actually see the orbital motion of the white dwarf and its companion from this plot.

The authors then look at the Spectral Energy Distribution (SED) of the system, a plot of the total flux at a variety of wavelengths (see Figure 2). The blue points show the measured data and are well-fitted at shorter wavelengths by a hot black body. This is the expected spectrum from a white dwarf, and is indicated by the dotted line. At longer wavelengths, the companion is expected to enhance the emission slightly, since it is a cooler black body emitting at a longer wavelength. The expected emission from the pair is shown with red circles. But the emission at very long wavelengths is enhanced. A second, broad excess emission is seen, and fitted as a blackbody at 1100K (the dashed line). This is assumed to be a ring of debris dust. 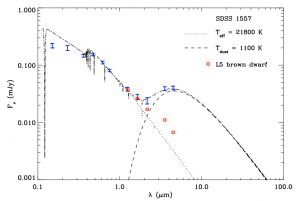 The orbital period of the binary companion is 2.27 hours, based on the radial velocity data above. Now, 2.27 hours is a pretty short time. It’s about the time it takes for an elite runner to complete a marathon. The binary system completes 4000 orbits in the time that Earth orbits once around the Sun. It won’t surprise you to learn that the distance between these two stars is absolutely tiny, with the separation being just 0.7 solar radii.

This is a problem. A dust ring in this binary system would only be stable in two situations. Either the ring is much closer to the white dwarf than the companion, where it effectively orbits just the white dwarf or the ring is much further out than the companion, where it orbits the two stars as a pair. But the close-in scenario would require the dust to be at least 1700K, while the far out scenario requires the dust to be less than 500K. As established above, the dust is 1100K based on the SED. Instead, the authors suggest that there must be a wide dust ring that is optically thin, rather than the normally assumed optically thick configuration. The disk must also be significantly vertically extended, since the dust is accreting at a rate of 600 metric tonnes (or 40 sperm whales) per second. This is two orders of magnitude more than would be expected for an optically thin disk at this radius.

The rate of dust accretion is pretty constistent, with similar observations having been measured in 2010, 2012, 2014 and 2016. Since the 40-whale-a-second accretion has been happening for at least 6 years, the white dwarf must have accreted at least 1017  grams of stuff. For anyone counting, that’s 6 billion sperm whales or 10 Churuyumov-Gerasimenko comets.

This is where it gets exciting: some further calculations based on this accretion rate indicate the parent body of this debris disk must have had a diameter of at least 4km. That’s a pretty hefty planetesimal, at the very least. This indicates that the close binary companion didn’t prevent the growth of planetesimals and that at least some of those planetesimals weren’t destroyed in collisions. This, in turn, suggests that rocky planet formation was occurring within the snow line, and wasn’t inhibited by the companion. Planet formation isn’t well understood, and this especially true in dynamically complex environments such as multiple star systems, but this result proves planets around binarys must be common.