White dwarfs are dense stellar remnants, roughly the mass of the sun and the radius of the earth. They’re the hot core of a star left over after nuclear fusion has stopped and the star has expelled its outer layers into a planetary nebula. They are also odd but interesting places to learn about exoplanets. In this case, the authors were looking not at a planet itself, but at a debris disk around the white dwarf J0959 0200, which was likely formed from tidally disrupted planetesimals.

The authors were comparing WISE and Spitzer IRAC infrared observations of white dwarfs, and found an infrared excess. This extra infrared emission is most likely caused by dust in a debris disk around the white dwarf absorbing the light from the white dwarf and re-emitting it at infrared wavelengths. This data was from 2010. Looking to learn more, they obtained updated Spitzer measurements in 2014. They found that the source had decreased in brightness in the 2 IRAC bands at (3.6 and 4.5 microns) by almost 35%. They also had J, H, and K band data from 2005, so they obtained updated measurements in 2014, and found that the source decreased in brightness in the K band (~4 microns), while remaining unchanged in J and H bands (~2 and 3 microns, respectively). This is consistent with the results from Spitzer, and it means the cooler, dusty component of the system is decreasing in brightness, while the hotter white dwarf itself remains unchanged.

So if the disk has decreased in brightness, what does that mean? Well, the infrared excess is due to a disk of dusty material around the white dwarf. How much infrared excess you see depends on the width of the disk (the radius of its inner and outer edges) and its inclination. If you have a disk that is edge-on to the line of sight, then you don’t observe much of the disk, or therefore much infrared excess. But if the disk is face-on to the line of sight, you see the whole disk, and lots of infrared emission. And obviously the more surface area the disk covers–the closer, or smaller the inner radius and the bigger the outer radius–the more excess you see.

For the data taken in 2010 and earlier, the observers measure so much infrared excess that the disk must be face-on and have a very narrow inner edge (only 10.5 times the radius of the white dwarf, which itself only has a radius about that of the earth!), so that it is thoroughly heated by the white dwarf. The outer edge is less well constrained, because it is cooler and best constrained by 8 micron observations, which were not available for this project.

What then, accounts for the drop in flux observed between 2010 and 2014? The model that best describes the observations and makes sense with the 2010 observations is that the inner edge of the disk moved out from 10.5 times the white dwarf’s radius in 2010 to 14 times the radius in 2014. Essentially, the disk was destroyed from the white dwarf’s side. See Figure 1 for details. But what can cause this? The authors offer two suggestions. 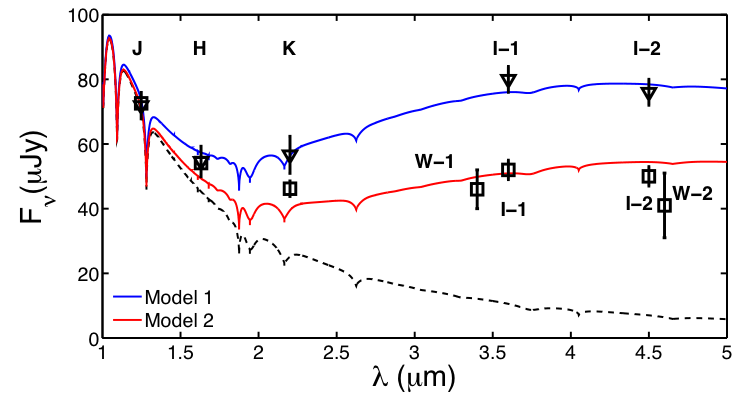 Figure 2. SED fits to the observations. The blue line is fitted to the data prior to March 2010, and the red line to data taken after March 2010. The only difference between the two models is the inner disk radius, which increases from 10.5 to 14 times the radius of the white dwarf. Credit: Xu et al. 2014.

The first is that an asteroid could have impacted the disk and disrupted it. But it would have to be an anomalously large asteroid to cause the large increase in the inner disk radius observed. The other explanation relies on the fact that prior to 2010, a very hot inner disk temperature was required to explain the observations. Such a high temperature makes the inner disk unstable, and dusty/rocky material could interact with the viscous gas and cause sudden events of high rates of accretion onto the star–high enough to dissolve something like 3% of the disk’s mass within ~300 days, in a disk that would otherwise stick around for roughly a million years. If this second case is what happened, that level of accretion will be observable similar to a nova event. The authors advise observing the star on shorter timescales in order to catch a future such event in action and answer definitively what’s going on around this dusty–now slightly less dusty–white dwarf.