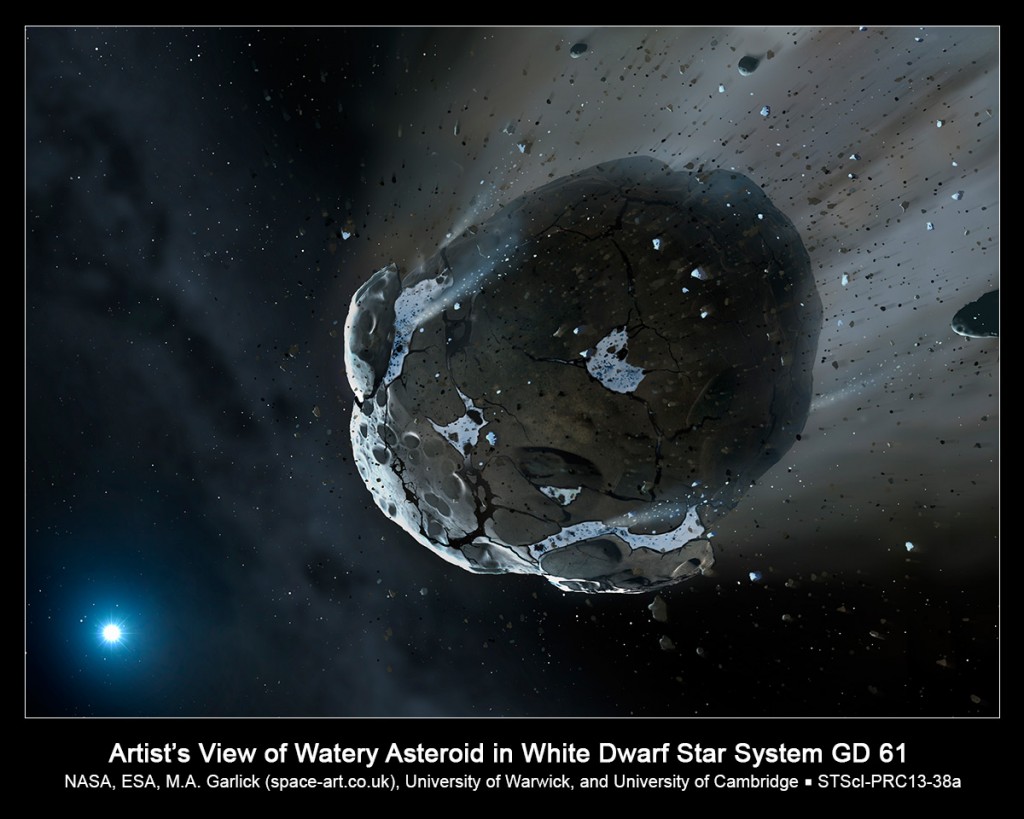 Water is an important ingredient for life, so astronomers put great emphasis on finding water in other planetary systems. Unfortunately, the bulk composition of exoplanets is very difficult to determine. Terrestrial exoplanets are determined to be rocky by calculating their densities from mass and radius measurements. Transit spectroscopy of giant planets reveals their atmospheric composition, but the internal composition of fully formed exoplanets has not been measured. Now astronomers have gotten a better look at the building blocks of planets by investigating the debris of destroyed asteroids around a white dwarf star. They discovered the asteroid was composed of 26% water by mass.

A white dwarf is the last stage in the life cycle of some stars. After a star has exhausted its supply of fuel in its core, it expels its outer layers into a planetary nebula, leaving only the core behind. The white dwarf has an extremely high surface gravity, much higher than a normal star, so elements heavier than Hydrogen and Helium quickly sink deep into the star. This makes the white dwarf a pristine laboratory for studying the remains of the planetary system the progenitor star once harbored.

During its lifetime, the white dwarf will accrete some of the remnant material in the planetary system, asteroid and comets that make up the system’s debris disk. The materials are quickly ripped apart into their constituent elements. These elements can then be seen in absorption spectroscopy of the white dwarf. Since heavy elements only survive for about 10,000 years before they sink, they must have been accreted relatively recently (astronomically speaking). This is how we know the elements picked out in the spectrum must come from the remnant planetary system.

Farihi et al. observed the white dwarf GD 61 in the ultraviolet (UV) with the Cosmic Origins Spectrograph onboard the Hubble Space Telescope to look for absorption signatures of heavy elements in its atmosphere. Using this UV data combined with previous ground based observations, the authors derived detections or upper limits of Oxygen (O), Carbon (C), Magnesium (Mg), Aluminum (Al), Silicon (Si), and Calcium (Ca). By measuring the abundances of all these elements, they could calculate the amounts of oxygen compared to the amount of other elements commonly found in rocky material. This is how they discovered the excess of oxygen that they attributed to water.

Oxygen Excess
Farihi et al. found the debris accreted by the white dwarf was carbon deficient, so the bulk of the oxygen could not have come from CO or CO2. They then tried to account for the rest of the oxygen by assuming it was carried by the heavier elements in the form of FeO, CaO, SiO2, Al2O3, and MgO. As shown in the figure below, these oxides can only account for a little over 50% of the oxygen found. The authors assumed the rest of the oxygen came in the form of H2O. This would make the asteroid 26% water by mass. This is an important discovery for planet formation research because it means that water could have been easily brought to terrestrial planets in this system through water-rich asteroids. 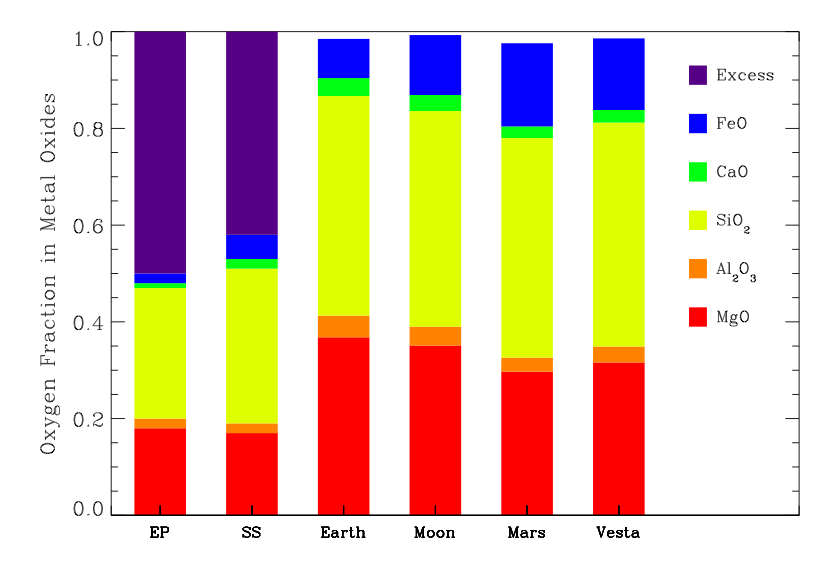 Fraction of oxygen carried by oxides in various terrestrial bodies. The first two columns represent two different models for the white dwarf accretion, Early Phase (EP) and Steady State (SS). In both models, there is a significant excess of oxygen (purple) which is thought to come from water.