The third Extreme Solar Systems conference was held between November 29 to December 4th, in Kona, Hawaii, on the 20th anniversary of the first detection of an exoplanet around a main sequence star, 51 Pegasi.

The conference brought together around 350 astronomers from all over the world to discuss everything exoplanets. There were over 100 talks, and hundreds of posters—a lot of material to cover. This astrobite aims to give a brief overview of the conference by restricting its scope to answering the following questions: What have we learned about exoplanets in the last two decades? What is the most extreme solar system discovered to date? What do we hope to learn in the near-term future?

The extreme solar systems meeting is kicking off! #ExSS3 pic.twitter.com/0mUVVlQEHw

The interested reader is invited to look at the webpage of the conference. The Twitter hashtag #ExSS3, and the storify-lists prepared by @stellarplanet on day 1, day 4 am, day 4 pm, day 5 am, and @johannateske on day 1, day 2-5, day 3, day 5 pm, also all have a wealth of material.

The Status of Exoplanet Science: What Have We Learned?

The short answer is lots; we have learned lots.

Only two decades ago, we had no concrete proof of the existence of exoplanets around main sequence stars. Now our view of the Universe is drastically different. Space and ground-based missions studying exoplanets have given us invaluable insight into areas such as how planets form, the structure of exoplanet interiors and the composition of their atmospheres, how exoplanets in multi-planet systems interact, how exoplanet orbits evolve with time, and the average number of planets in a solar system. We have come far.

The conference had a multitude of talks—even whole sessions—devoted to discussing these and other topics. One plot (or derived/modified plot) that kept reappearing during the conference is shown in the figure below: a plot of the radius of an exoplanet vs its mass. If you know the planet mass (e.g. from radial velocity or Transit Timing Variations measurements), and radius (e.g. from the transit method), then you can compute the planet’s bulk density. The bulk density tells you a lot about the planet’s composition, allowing you to pick out prime candidates for atmospheric characterization. 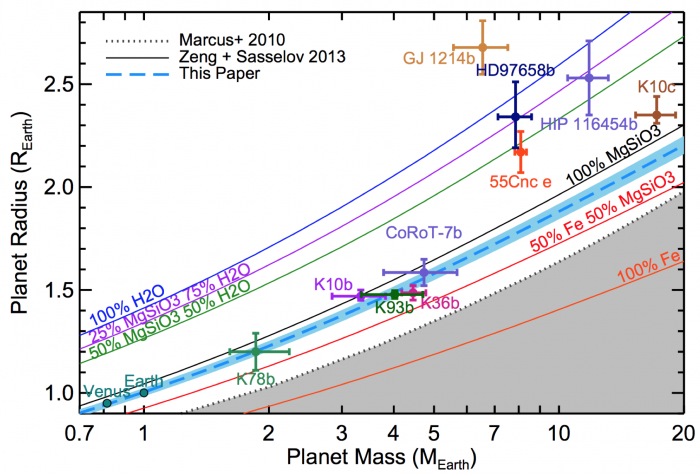 The exoplanet mass-radius relation. The radius of exoplanets plotted vs mass, for planets smaller than 2.7 Earth-radii. Knowing the mass and radius of a planet gives you the bulk density, and a handle on the bulk composition. Over-plotting theoretical curves for certain compositions guides the eye to see what densities are supported in exoplanet systems. Image from Dressing et al. 2015.

As we find more and more planets, we can start to populate this diagram, to see what the empirical mass-radius relation for exoplanets looks like. For many planets we only know the radius, but with a well calibrated mass-radius relation, we can predict the mass—an especially efficient tool for transit surveys. However, the relation looks to be fuzzy: there is scatter observed in the mass for a given radius (see figure above, and for example this astrobite). Now the conversation focuses on answering what factors cause this scatter—should we rather call it the exoplanet mass-radius-eccentricity-period-[YourParameterHere] relation? Even though the picture looks complex, it is becoming clearer with every exoplanet discovered.

What is the Most Extreme Solar System Known?

This is an exciting question, a question directly linked to the name of the conference. There were many extreme systems discussed, so there is no definite right answer which one is “the most extreme”. Some argued (see Tweet below) that seen from another solar system that our own Solar System might be the most extreme: a uni-stellar system with finely tuned angular momenta, and Circular Wide-Orbiting Giant Planets!

Josh Winn tells us the big news about the alien megastructure society – they're having a conf this week, too #ExSS3 pic.twitter.com/smGJHsBE2G

Below are a few randomly selected systems from the conference that clearly fit into the “extreme category”.

Rogers: you would have to travel more than one orbital radius to get here! #ExSS3 pic.twitter.com/1EoKSjQJHc 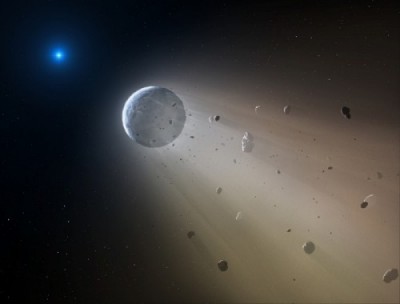 WD 1145+017: An artist’s impression of the White Dwarf WD 1145+017 with a disintegrating transiting planet. Image credit Mark A. Garlick. 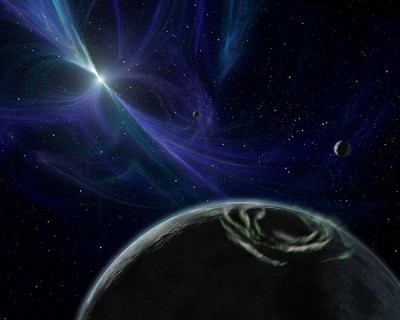 An artist’s conception of the PSR B1257+12 planetary system, the first exoplanet system of any kind to be be discovered. Image credit NASA/JPL-Caltech.

What Do We Hope to Learn in the Near-Term Future?

The conference concluded with talks about many upcoming future missions, TESS, JWST, GAIA, PLATO, CHEOPS, SPIRou, missions which are certain to discover thousands of new exoplanet systems, catapulting exoplanet science into a new era where target lists of likely habitable planets are plentiful. Will we find more planets with biosignatures? Will we be able to image them directly? Will we find more extreme solar systems? I’d bet! Let’s see what new solar systems we have uncovered at Extreme Solar Systems IV in 2019 in Iceland.