How do planets meet their ends? For many of the smallest worlds, it maybe as debris discs strewn around the tiny white dwarfs that are all that is left of their stars. The faint infrared glow from nearly forty such discs have been discovered, their rocky origins given away by the chemical composition of the material falling onto the parent white dwarf. Today’s paper adds another disc to the sample, although not without difficulty.

At temperatures of a few hundred to a thousand Kelvin, discs around white dwarfs emit infrared light. This aids in their detection: as the central white dwarf gives off mostly blue and ultraviolet light, the light from the disc is not washed out. However, the downside is that the Earth’s atmosphere absorbs infrared light at the wavelengths the disc emits, so such detections have to be made from space.

The authors use data from the Wide-field Infrared Survey Explorer spacecraft, or WISE. As the name suggests, WISE was a survey mission, sweeping the whole sky looking for sources of infrared light. Taking a list white dwarfs from the ground-based Edinburgh-Cape Blue Object survey, the authors crossed-matched their positions with the infrared sources spotted by WISE. They found that the position of the white dwarf EC 05365 had a strong WISE signal, giving off much more infrared light than expected. Could this be a planetary debris disc?

Figure 1:  The left panel shows an image from the VISTA survey, with the white dwarf in the centre along with two other sources. The right panel shows the much lower-resolution WISE data, which, whilst roughly centred on the white dwarf, could be coming from the object to its left (Source A). The lines show the strength of the WISE signal building up towards the centre (Figure 4 from the paper).

Unfortunately it wasn’t quite that simple. The resolution of WISE is low in comparison with many telescopes, such that it can be difficult to tell exactly where the infrared light is coming from between close-by objects. Figure 1 shows the WISE data on the right, and an image of the same spot from the VISTA survey on the left. EC 05365 is just off the centre of the WISE data, so is the most likely candidate for the infrared light. However, two other sources appear on the VISTA image. The top right object is too faint to matter, but the closer object to the left of the white dwarf, designated “Source A” could be contributing a portion of the WISE signal. Was it light from the second object, rather than a debris disc, that WISE was picking up?

Secondly, the author used a technique called “forced photometry”, taking what they did know, such as the position of the objects, the distribution of the WISE signal, and the background noise, to simulate the relative signals of the two sources. They again found that the Source A contributed much less to the infrared signal than the white dwarf. With the two techniques argreeing, the authors are confident that they have indeed detected a debris disc around EC 05365. 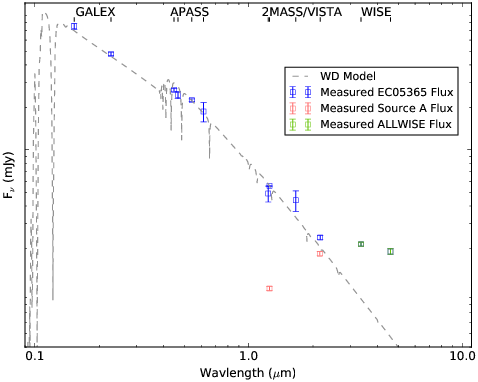 Figure 2: The blue points show measurements of the light received from EC 05365 at different wavelengths, going from ultraviolet and blue light on the left to infrared on the right. The VISTA measurements of Source A are shown in red. The grey line shows the predicted signal from the white dwarf at each point. The green WISE points are clearly much higher than predicted, suggesting the presence of a debris disc. (Figure 3 from the paper).

The detection is shown more clearly in Figure 2, which shows the amount of light detected from EC 05365 at different wavelengths, with the extra infrared light from the disc easily visible. Our sample of ruined planetary systems grows again. The authors go on to try to model the shape of the disc, as well as probe the chemical composition of the debris. They finish by looking forwards to the launch of the James Webb Space Telescope which, with its  powerful infrared vision, could revolutionise our knowledge of these planetary graveyards.

Astrobiter’s note: In the interests of brevity I’ve focused on just one area of the paper here, which I hope provides an insight into the level of work behind even outwardly simple discoveries. Many more aspects of the EC 05365 system are discussed, so if you want to know more I invite you to read the paper, and I can answer questions in the comments.

The Magnetic Personalities Of Dead Stars