Searching for Signs of Plate Tectonics in Polluted White Dwarfs

Plate tectonics is a unique feature of Earth. Unlike every other rocky body in our Solar System, Earth’s crust is broken up into roughly a dozen pieces (plates) that move around with different velocities. When two plates converge, one plate sinks under the other in a process called subduction, eventually becoming recycled into the mantle and causing volcanism, earthquakes, and mountain building on the surface.

Plate tectonics regulates Earth’s atmospheric composition through the cycle of subduction and volcanic degassing. Subduction returns carbonate rocks like limestone from the seafloor into the mantle, for example, while carbon dioxide is emitted from volcanoes at plate boundaries. It’s probably not a coincidence that the only known planet with plate tectonics is the only one with life. So, we’d really like to know if plate tectonics is a thing that happens on terrestrial exoplanets.

Today’s paper discusses the first step in a search for evidence of plate tectonics—a hunt for the remnants of continental crust within two white dwarfs that have accreted little bits of rocky planets, aka planetesimals. Although these two stars yielded no evidence for extrasolar plate tectonics, a survey of more targets seems exceedingly worthwhile.

To a rough approximation, rocky planets are chemically differentiated into three distinct layers. Early in the process of planetary formation, an iron-rich core separates from a silicate mantle. A basaltic crust then forms over time from the partial melting of the mantle. Oxygen and silicon are the most abundant elements in basaltic crust, followed by calcium and aluminum, as observed on Mars, the Moon, and Vesta. 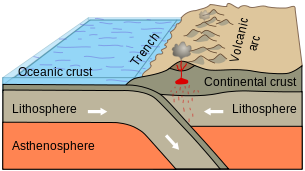 Figure 1 (Wikipedia). Cartoon of a converging boundary between oceanic and continental plates. Oceanic, basaltic crust is subducted because it is more dense than continental crust. The subducting plate partially melts, causing surface volcanism and the production of more continental crust, which is enriched in incompatible elements like strontium and barium.

Continents are less dense than oceanic crust, so they tend to stick around on the surface, as shown on Figure 1. If a planet has plate tectonics for a significant part of its history, then evidence should remain on its outermost skin. Unfortunately, we can’t send a probe to any exoplanets in the foreseeable future, nor can we spectrally analyze the surfaces of distant rocky planets from Earth. Using a new technique, however, we can search the corpses of Sun-like stars for remnants of Earth-like planets.

Our Sun will end its life as a white dwarf, after it expands into a red giant and sheds its outer layers as planetary nebulae. (N.b., planetary nebulae have nothing to do with planets and are a great example of astronomers being very silly with words. But they look cool!) Planets could survive this end stage of stellar evolution and remain orbiting the white dwarf. 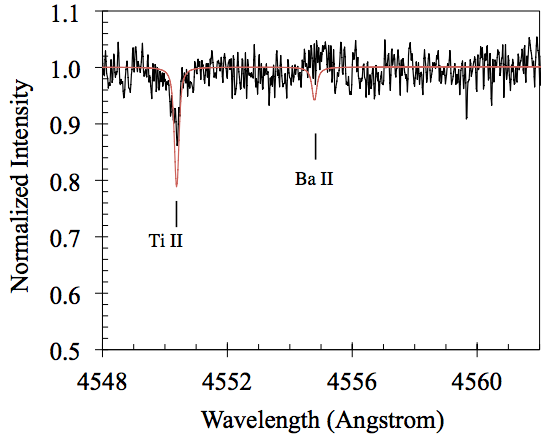 Figure 2 (Jura et al. 2014). Spectrum of the polluted white dwarf GD 362 in the vicinity of the Ba II spectral feature. Black lines are data and the red lines are a model with the maximum amount of barium consistent with the data. GD 362 is accreting rocky planetesimals, but they are not sufficiently enriched in barium to argue that they contain a significant amount of continental crust from a planet with plate tectonics.

Elements heavier than hydrogen or helium quickly (in ~10,000 years) sink below the observable photosphere of white dwarfs. This is fascinating, because observing heavier elements in the spectrum of a white dwarf means that something like a rocky planetesimal has just accreted, or is accreting, onto the “polluted” white dwarf. (Without external accretion, we expect to see only hydrogen and helium.) Scientists used these tactics to argue for extremely water-rich asteroids orbiting the white dwarf GD 61.

Imagine the following scenario: an asteroid impact knocks off part of the crust from a planet orbiting a white dwarf that has plate tectonics. If these crustal remnants were then accreted onto the white dwarf, then we could observe signs of rocky material with a very high barium-to-calcium or strontium-to-calcium ratio in its spectrum.

Figure 2 shows the region of the spectrum of the polluted white dwarf GD 362 (black data) that would reveal an absorption line of barium. Alack, the authors place an upper limit on the barium abundance (red model) that excludes the accretion of a significant amount of continental crust. Similar results were obtained for another polluted white dwarf, PG 1225-079.