The Solar System is flat. The orbits of the eight planets fall, approximately, in the same plane, and this plane is aligned with the equator of the Sun. While some asteroids and Kuiper belt objects have high inclinations, most of the bodies in these belts are orbiting in this plane, as well. It makes sense that the Sun, planets, and smaller bodies all orbit in the same plane, when we consider that they all formed from the same rotating and collapsing cloud of gas and dust.

Therefore, it was so surprising when astronomers discovered that some exoplanets’ orbits are misaligned from their stars’ equator. Measuring this misalignment was only possible for transiting planets where the Rossiter-McLaughlin effect could be measured. This phenomenon is an observable shift in the wavelength of absorption lines in a star’s spectrum as the transiting planet blocks the blue- or red-shifted parts of the spinning star; it is illustrated nicely in this astrobite.

What causes this spin-orbit misalignment? Four common theories:
a) Perhaps these planets had close encounters with other planets in their system, causing a scattering interaction that drastically tilted their orbits.
b) The Kozai mechanism, where the gravitational influence of a larger planet causes an inner planet’s inclination to oscillate periodically, thereby making the inner planet misaligned with the star’s equator at times.
c) Some astronomers think that the star, when it is young, can tip over because of interactions between its magnetic field and its protoplanetary disk.
d) Maybe the protoplanetary disk became tilted when a neighboring star and disk passed close by.

Figure 1. An image at far-infrared wavelengths of the HD 115617 debris disk taken by Herschel. The shape of the disk in this image is used to determine the disk’s inclination, assuming it is intrinsically circular.

To narrow down the possibilities, we’d like to know if the misalignment is only present for close-in transiting planets or if the outer regions of planetary systems can also be misaligned. But finding far-out planets–and measuring the inclinations of their orbits–is difficult. Debris disks, however, are much easier to detect. And, by spatially resolving debris disks, we can not only determine their true shapes and sizes, but also their inclinations.

The authors of this paper study 11 debris disks that were resolved by the Herschel Space Observatory in the far-infrared, and whose stars also have well-measured spin orientations. Figure 1 shows an example Herschel image of a debris disk. By assuming the disk is truly circular, the shape of the image reveals the inclination angle at which we are viewing it.

The inclination of a star’s spin axis is found in two steps. First, the broadening of the star’s spectral lines caused by its rotation is measured. This yields v*sin(i), where v is the rotational velocity of the star’s equator, and i is the inclination. Second, v is independently estimated using the star’s size and its period of rotation (found by monitoring its brightness oscillations). Combing these measurements gives i, the star’s inclination.

For these eleven stars, the authors find that the plane of the disks are aligned with the equators of the stars to within 10 degrees. Their results are illustrated in Figure 2, which plots the disk inclination (from our viewpoint) on the x axis and a measure of the star-disk alignment on the y axis. This suggests that the previously-observed spin-orbit misalignments are not caused by the star or the entire planetary system tilting, but by a mechanism that specifically affects the orbits of close-in planets. Planet-planet scattering or Kozai oscillations now seem more likely, whereas magnetic interactions between the star and protoplanetary disk or encounters with nearby stars are less plausible. More research will be necessary to figure out exactly how some close-in planets’ orbits become misaligned. 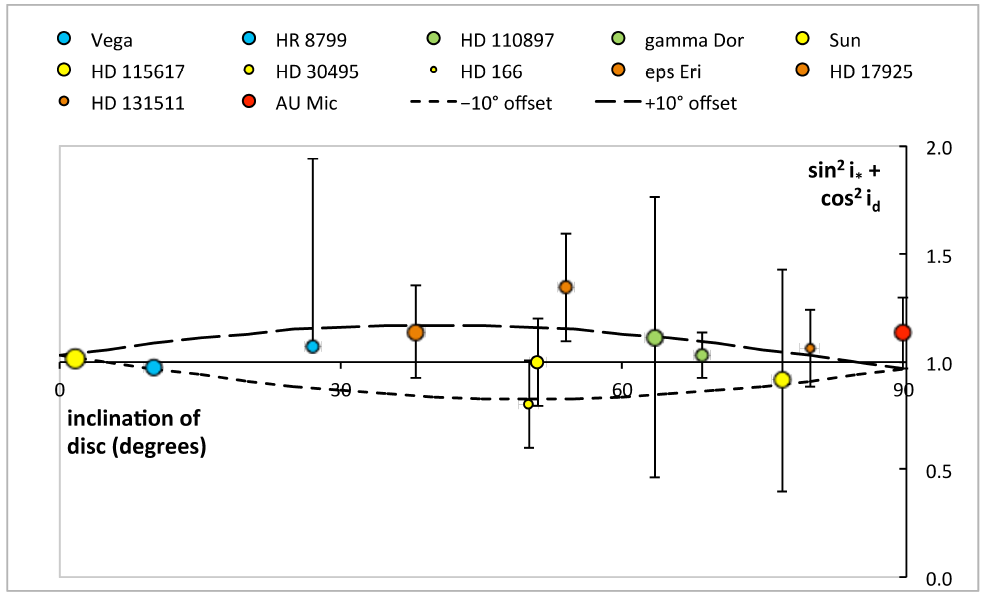 Figure 2. The disk-star alignment (y-axis) versus the disk inclination (x-axis) for the eleven stars considered in this paper (plus the Sun). The y axis is the Pythagorean trigonometric identity expressed with the star and disk inclination angles, which would equal 1 if the angles are the same.