Iapetus is Saturn’s third-largest satellite, with a radius just less than half of Earth’s Moon. Travel guides normally lead with lyrical descriptions of two prominent features on Iapetus’ surface: Cassini Regio (a big splotchy thing) and the equatorial ridge (makes Iapetus look like a walnut). The ridge is particularly cool because it contains several peaks twice as tall as Everest. Today, however, I’ll discuss an aspect of Iapetus best described with squiggly lines. 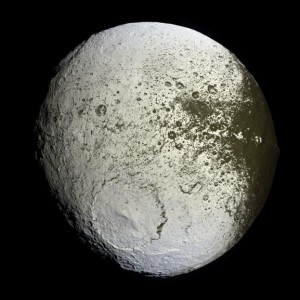 Behold Iapetus! Cassini Regio, obvious on the right, is related to dust that Iapetus picks up as it orbits around Saturn. There’s a big crater towards the bottom. And there are other craters and things. (Image credit: NASA, mosaic of images from the Cassini mission.)

Today’s paper tackles a problematic aspect of Iapetus’ orbital dynamics—its inclination is high, unlike Saturn’s other large moons, but its eccentricity is low. Reigning theories for the formation of Iapetus and Saturn’s other large satellites predict initially zero inclination and eccentricity. Nesvorny et al. suggest that close interactions between Saturn and an ice giant planet during the chaotic early history of the Solar System may have inflated Iapetus’ inclination to its present-day value.

Not only does this paper elucidate an interesting aspect of Iapetus, it reinforces the general point that properties of planetary satellites are keys to the formation and evolution of the planets themselves.

The planets in our Solar System formed from a disk of gas, ice, and dust centered on the Sun. Likewise, the large satellites of Saturn probably accreted from a disk of material surrounding Saturn. People expect the disk to have settled to something called the Laplace surface: a sort of warped plane where orbits have both fixed orientation and shape. Away from the Laplace surface, orbits are affected by the gravitational potential of the central planet (which is funky because the planet has a rotational bulge) and the Sun. 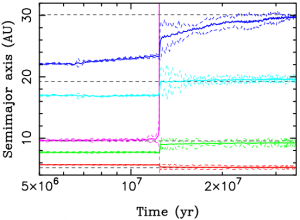 Close encounters of the Nice kind

In the family of simulations that comprise the popular “Nice model” for the early evolution of the Solar System, the orbits of the planets change radically in <500 million years. Some simulations even include a third ice giant planet (besides Uranus and Neptune) that was ejected from the Solar System after a series of close encounters with Saturn, thus failing to stick around and acquire a proper name. Figure 2 shows a possible orbital history for the outer planets. The departed ice giant’s semimajor axis is plotted in pink as a function of time. Uranus and Neptune are dark and light blue, respectively. Green and red lines represent the evolution of Saturn and Jupiter.

The Nice model was designed to reproduce the modern orbits of the major planets. Any comprehensive model for the formation of the Solar System, however, should also predict other features of the Solar System. Adherents of the Nice model claim that it helps solve puzzles like the origin of Jupiter’s Trojan asteroids, the Late Heavy Bombardment of the inner solar system, and much else. It would be nice if it could explain the abnormal inclination of Iapetus, too. 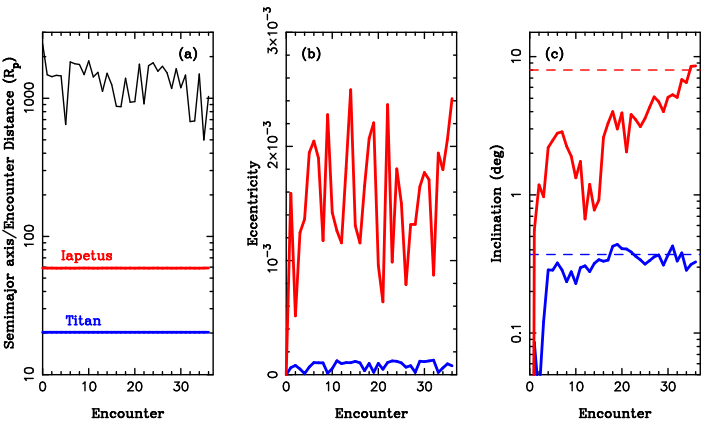 Results from one simulation of Nesvorny et al. Various orbital properties of Iapetus and Titan are plotted after each close encounter between Saturn and an interloping ice giant. The distance of each encounter is shown as a black line in panel a. The inclination and eccentricity of both Iapetus and Titan eventually reach their present-day values.

The authors found that Iapetus’ inclination could be reproduced if the interloping ice giant passed no closer than twice the orbital distance of Iapetus from Saturn. Any closer, and Iapetus would have been ridiculously excited or even ejected. Figure 3 shows promising results from one case, in which just under 40 encounters occurred over ~100,000 years. To make this plot, they selected the results of one simulation in which the inclination and eccentricity of Iapetus and Titan are excited to nearly their present-day values. Since Saturn’s other satellites orbit much closer in, they remain relatively unperturbed. However, they admit that the outcomes of their simulations are stochastic and sensitive to their initial conditions. More work is required, likely using a massive amount of computational power, to ensure that successful simulations are not complete rarities. If successful, though, scientists will have solved a longstanding problem with our understanding of Iapetus and simultaneously deepened our understanding of the entire Solar System.

Reassuring Chicken Little: Why Satellites Are Not Falling Out of The Sky