Title: The formation of the Galilean moons and Titan in the Grand Tack scenario

Figure 1: Ganymede (left) and Titan (right): Big moons around big planets, so how did they end up so different? Image Credit: NASA

Among the many ideas astronomers have proposed to explain the formation of our Solar system, one of the leading theories is the “Grand Tack“. This scenario suggests that, early in their formation, Jupiter and Saturn undertook a sweeping voyage, migrating from the outer Solar System to within the orbit of Mars. The two huge planets then entered an orbital resonance with each other, before their cosmic dance took them back out to their current positions. The model neatly explains, amongst other things, the current locations of Mars, the Asteroid Belt and the outer planets—which are hard to recreate in models assuming a more static Solar System.

This paper seeks to test the implications of the Grand Tack for the formation histories of the gas giants’ large moons. Specifically, why do the biggest of Jupiter’s moons, Ganymede and Callisto, have ice layers totaling around half of their masses, whilst the smaller Europa and Io have much less water? And why are the airless Jovian moons so different from Saturn’s largest moon, Titan, which is wrapped in a nitrogen atmosphere thicker than Earth’s?

To find out where Ganymede and Callisto’s ice came from, the authors of this paper simulated the circumplanetary disc of gas and dust around Jupiter that the moons are thought to have formed from. Taking into account all of the various heat sources present, such as drag from gas in the disc, heat from both the Sun and Jupiter, and meteorite impacts onto the disc, they tried to work out the location of Jupiter’s “ice line“. This is the distance from Jupiter where the temperature is cool enough for ice to form, allowing Ganymede and Callisto to build up their massive ice layers.

However, as Jupiter underwent its Grand Tack towards the Sun, the gravitational force of the Sun on the disc would increase compared with Jupiter’s. This would decrease the distance at which Jupiter could hold on to orbiting particles, shrinking the disc. If the outer edge of the  disc became smaller than the distance to the ice line, the formation of watery moons would be curtailed. 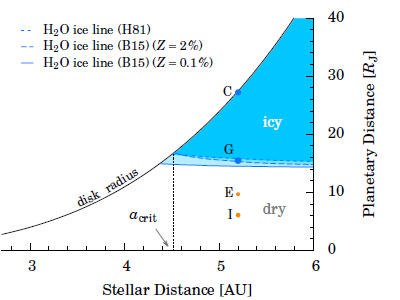 Figure 2: Simulation of the moon-forming disc around the young Jupiter. The x-axis shows the distance of Jupiter from the Sun, whilst the y-axis shows the disc radius. Each of the four Galilean moons (Io, Europa, Ganymede and Callisto) are plotted in their current positions. The blue horizontal line shows the location of the ice line, and the vertical dotted line show the distance from the Sun at which the disc becomes too small to form ice.

The results of their simulation are show in Fig 2. The blue lines show the ice line, at slightly different distances from Jupiter depending on what assumptions they make about the composition of the disc. The moons are exactly where you’d expect them to be: Water-rich Ganymede and Callisto outside the ice line, dry(er) Io and Europa within. The black line shows the location of the outer edge of the disc, which shrinks as Jupiter gets closer to the Sun.

The key detail is the vertical line at 4.5 au, where the disc becomes smaller than the ice line. This means that Ganymede and Callisto cannot have formed while Jupiter was on its Grand Tack—there was no ice to make them from.

Neither could they have formed after the Grand Tack, slowly building up water ice via impacts from asteroids (thought to be the source of Earth’s water). If that was the case, why aren’t Io and Europa watery as well? Assuming that the Grand Tack really happened, only one option remains: Ganymede and Callisto formed quickly, before the Grand Tack while the outer regions of Jupiter’s disc was still full of ice. When the giant planet embarked on its epic journey across the Solar System, it took its new moons with it.

But what about Titan? Saturn migrated over a similar range of distances from the Sun to Jupiter, so was it carrying a moon with it as well? To answer this question, the authors looked at Titan’s thick atmosphere.

Simulating a similar atmosphere around Callisto, they found that the heat from the Sun wouldn’t have been enough to peel away the gas, even at Jupiter’s closest distance to the Sun. However, the young star would also have been blasting Callisto with ultraviolet light, eroding away the atmosphere like a pebble caught in a flood. To have held on to its atmosphere, Titan must therefore have formed after the Grand Tack, avoiding the destructive close approach to the Sun.

The Grand Tack therefore neatly constrains the formation histories of the massive outer Solar System moons, and helps explain some of the key differences between them. The authors finish by noting that these hypotheses can be put to the test. The Jupiter Icy Moons Explorer (JUICE) is scheduled to arrive at Jupiter in 2030, making observations of Ganymede and Callisto. Their surfaces may well bear scars left during the Grand Tack.