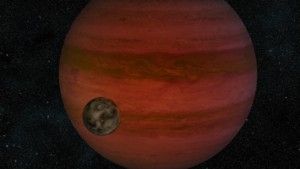 Artist’s conception of an exoplanet and its moon. (NASA/JPL-Caltech)

Those of us who love astrobiology get really worked up about the lack of Earth-sized exoplanets found at Earth-like distances from their stars. All we want, we who hope for lots of extraterrestrial life, is a bunch of Earth-like planets doing Earth-like things so we can feel better about the odds for lots of Earth-like life in the universe.

But among the glut of exoplanets identified in recent years, Earth-sized planets have not dominated the discoveries. Yes, some of that is due to the biases of the detection methods: very big planets and planets orbiting very close to their stars are just easier to find. But even still, all these hot Jupiters are dispiriting. Even when they’re not super close to their stars, Jupiter-mass planets orbiting at around 1AU—Earth’s distance from the sun are taking up orbital space that could otherwise be occupied by a friendly, terrestrial planet, right?

Except, judging from our own Jupiter, a giant planet could bring its own little habitable worlds along with it, in the form of moons. Today’s paper looks at satellite formation in super-Jovian planets.  If planets even bigger than Jupiter could feasibly have even bigger moons, rocky worlds with water that could potentially be homes to life.

In many ways, moon formation is a microcosm of planet formation: whereas planets form from the accretion disk left around a star after the star’s birth, moons generally form from the disk of material left around a new planet. (“Generally” because Earth’s moon is thought to have had a much later and more violent birth.) Saturn may wear the remnants of this process as its rings.

Yet moon formation has been studied less thoroughly than planet formation. Today’s authors look at one aspect—water ice lines acting as planet traps—that has been established for planet formations to see if it can account for the formation of large mega-Jovian moons.

The water ice line in an accretion disk, whether around a star or planet, is the distance beyond which water is solid. In planet formation, this is thought to be the boundary between big planets and small planets. Beyond the ice line, water and other volatiles are solid, so there’s more solid material for planetesimals to coalesce from, and the stickiness of ice helps speed things along. The ice line is also important in that it may serve as a “planet trap.” Due to the change in disk density at that line, planets on an inward migration may be caught and stopped from spiraling all the way in toward the star. However, no one has fully tested this mechanism in the context of moon formation. Current proposals for satellite formation either posit that most moons migrate into their planets and meet their doom, or they form closer in and drift outward as the material around the planet expands.

The authors model the evolution of accretion disks around Jupiter-like planets, building on previous research by taking into account the temperature profile of the disk. The temperature is important because that’s what determines where ice can form! They played out hundreds of simulations, with planets ranging from one to twelve times the mass of Jupiter. Figure 1 shows ice line evolutions for planets at various masses. 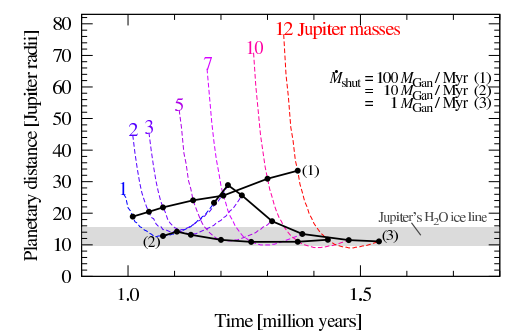 Figure 1: Evolution of water ice lines in the disks around super-Jovian planets. Each colored line shows the evolution of the ice line in time, as it moves in closer and then farther out again from the planet. (Each color represents a hypothetical planet at a given mass: dark blue is 1 Jupiter mass, red is 12 Jupiter masses.) The black dots indicate the end of moon formation, according to three different scenarios. The variable in the scenarios is the rate of accretion, and thus the depletion of material for moon-making.

You can see that all of the ice line distances at the end of moon formation (black dots) for scenario 2 are in that gray horizontal band. That band represents the orbits of Jupiter’s moons Europa and Ganymede. If ice lines do serve as moon traps, this is where Jupiter’s ice line should have been when its large moons finished forming. The match between the simulation results and the example of Jupiter is heartening for this theory. The authors write that their work confirms that Jupiter’s system scales: planets that are much bigger than Jupiter could host moons much bigger than Jupiter’s moons. These moons could even be as massive as Mars, a perfectly respectable planet. And since they form out beyond the ice line, they are likely to be rich in water, quite possibly habitable.

One hitch is that gas giant exoplanets orbiting within the habitable zones of their stars have probably migrated in to that point from more distant formation points. The planet and its disk, of course, heat up as they migrate in toward the star. Icy moons would have to form before the disk gets too warm. Adding the migration process to simulations would be the next step in the prediction process.

But in addition to modeling, we could also understand exomoons better by deteccting them. While no exoplanet moon has yet been observed, we’re very close to having the capability. Really big exomoons could be spotted with the transit method; moons orbiting very hot, and thus luminous, planets could be detected with the next generation of telescopes, such as the European Extremely Large Telescope. All those mega-Jupiters hogging their habitable zones may have something to offer the search for life after all.