Title: Mass Constraint for a Planet in a Protoplanetary Disk from the Gap Width

Piecing together the planet puzzle

Ever wanted to witness the Earth’s formation in action?

Well… you may have missed your chance.

Unless you have access to a time machine, Superman’s sketchy ability to go back in time, or any other manner of disobeying the laws of space-time as humans (barely) understand them, there’s no way for you to rewind the clock and witness Earth’s formation when you yourself hadn’t even formed yet (presumably). 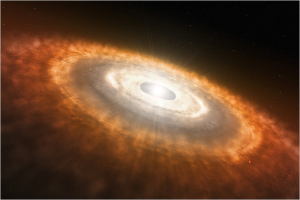 Figure 1: A beautiful illustration of a protoplanetary disk, by Luís Calçada.

That being said, directly observing a planet is no easy task; planets tend to be dimmer than their star, which literally makes them difficult to see.  (Trying to directly image planets in space is like trying to find a dark sock in your bedroom with the lights off.  Not an easy task.)

Astronomers thus employ other methods to infer where planets may be located – and the new Atacama Large Millimeter/submillimeter Array (ALMA) telescope has made this whole inference business a LOT easier.  ALMA’s high resolution allows astronomers to see the very fine structure of protoplanetary disks, including gaps and asymmetries in the disk itself.  The possibility that actual growing planets create these gaps and asymmetries has astronomers positively dancing with excitement.

Finding mass from… the gaps in mass?!

That’s certainly what the authors of today’s astrobite are excited about.  They present an empirical formula (as in, a relationship between parameters, such as mass or radius, measured from experimental or simulated data) for using the width of a disk gap to estimate the planet’s mass (assuming a planet caused the gap in the first place).

In their formula, the planet mass (Mp) depends on:

The proportionality of their formula (hand-waving the numerical constants involved) looks like this:

Previous studies (like this one and this other one) built a formula connecting the planet’s mass to the depth of the gap, using the same parameters of mass, distance, and viscosity above.  But for really deep gaps, the depth itself is difficult to accurately grasp without really high spatial resolution.  The gap width, in comparison, is a fairly painless parameter to measure both easily and accurately.  Today’s astrobite authors offer their width-based formula as a pleasant alternative to the depth-based one.

From simulation to equation

How did today’s authors assemble their empirical formula?

The authors used the 2D hydrodynamic code known as FARGO (a code that is quite popular for (1) simulating interactions between disks and planets and (2) displaying the interactions in a jaw-droppingly beautiful fashion) to simulate how a gap would form if they placed the ‘seed’ of a planet into a protoplanetary disk and then let it grow as it orbited the star. 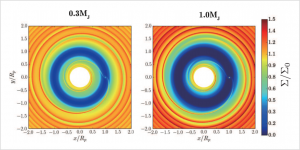 Figure 2: Results from two simulation runs. The plots show the disk from above, for planets of 0.3MJ and 1.0MJ, where MJ is the mass of Jupiter. The color gives the ratio of the disk’s surface density to the disk’s initial surface density, and so shows how much of the disk material is depleted at each location. Figure 1 in the paper.

To carry out their simulations (check out the examples shown in Figure 2), the authors first made a few simplifying assumptions.  For example, they politely ignored any gas accretion for the planets and assumed both a fixed disk aspect ratio and a fixed planetary orbital radius.  Then, they performed 26 simulations, with variations in planet mass, the disk aspect ratio, and viscosity over all runs.  In each simulation, they allowed the planet mass to ramp up over time from zero to a final desired amount.  Once the resulting gap appeared pretty stable, the authors measured the gap’s width. 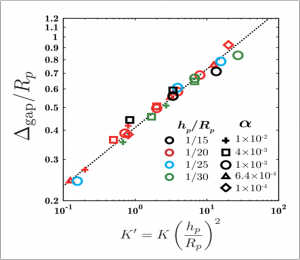 Figure 3: A plot of the parameters against each other, where K = [(MP/M*)2 (hP/RP)-5 α-1]. Each symbol represents an independent simulation run with varying values of aspect ratio and viscosity. Big Point: Note the strong trend! Figure 3 in the paper.

The authors found a very strong trend between gap width and the parameters of mass, radius, aspect ratio, and viscosity.  From that trend (see Figure 3!), their empirical formula was born!  Its planetary mass estimates are “reasonably consistent” with results from hydrodynamic simulations done previously (like in the studies here and also here).

As the icing on the cake, the authors pointed out how, if both the width and depth are measured accurately for a gap, then astronomers can use their width-based equation and the aforementioned depth-based equation in the following condition: if both independent equations provide the same planetary mass estimation, then we can safely conclude that the gap was caused by a planet!  With these equations in hand, astronomers can figure out which gaps in a disk were caused by planets – thus taking the search for planet formation to a whole new level.

So – even if we didn’t get to witness exactly how the Earth formed some billions of years ago, we could very well witness the formation phenomenon in other protoplanetary disks still maturing out in space.  And using the research from today’s astrobite, we can further narrow down where we should look to see planets form.  So sit back, grab a (very) large bucket of popcorn, and relax for the next million years, as we watch the incredible story of planet formation unfold (slowly) somewhere else.