Status: Accepted for publication in The Astrophysical Journal Letters, open access on arXiv

Update: See this post by Emma Foxell for a follow-up on the topic.

Hiding behind the gleaming light of a pale red dot lies one of the world’s favorite exoplanets, Proxima b, whose orbital motion imprints a barely detectable wobble in its host star, Proxima Centauri. Following the seminal discovery of a planet in its habitability zone, this undistinguished low-mass red dwarf star became a target for tireless examination, despite the challenges involved in observing it. In today’s paper, we will see that one of these searches, however, seems to have paid off… in dust? 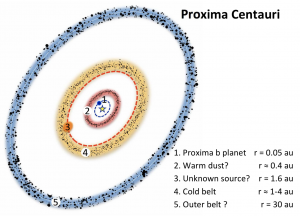 Figure 1. Observations of Proxima Centauri with the ALMA observatory suggest that it may not only host a rocky planet but also at least one dust ring around it.

Okay, I will be honest and admit that, indeed, few people in the world would be enthusiastic about dust — in space, of all the things! But, let me tell you, this is exciting dust. Guillem Anglada and his collaborators (including his spacefaring self from a parallel universe, Guillem Anglada-Escudé, who is the first author of Proxima b’s discovery paper) used the Atacama Large Millimeter Array (ALMA) to observe a dust ring around Proxima Centauri. Such an object is a signpost of terrestrial planet formation and could clue us in on how its planetary system looks like and came to be.

You may recall that the lore of Middle Earth tells the story of The One Ring to Rule Them All™, whose (un)fortunate wearer is granted the power to become invisible. In a funny exchange of roles, the dust ring around Proxima Centauri may actually help us uncover more information about the well-hidden planet Proxima b, such as its orbital inclination and mass.

But leaving western epic novels aside, let’s talk about the instrument. The ALMA observatory has two types of antennas: the smaller 7-meter diameter detectors, and the bigger 12-meter ones. The data that comes from these antennas differ in that the smaller ones produce images with fewer details but with a wider field-of-view; the bigger antennas produce more detailed images but see a limited field-of-view.

Following analysis of the data depicted in Figure 2 below, the authors found that Proxima Centauri appears to emit more infrared light than it should, which they conclude must be produced by a “belt,” or ring, of cold (50 K) dust.  The dust belt has a radius four times the distance of the Earth from the Sun (i.e. 4 AU). In reality, this dust ring seems to be an analog to the Solar System’s Kuiper Belt. They estimate that the mass contained in this belt is 1% that of Earth’s, which is similar to the mass of the Kuiper Belt around the Sun. 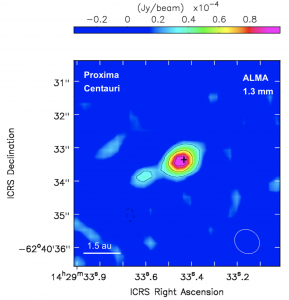 Figure 2. Image of Proxima Centauri (represented by the + mark) using ALMA’s 12-meter array. Although not clearly separated from the central source, the observed infrared excess strongly suggests the presence of a dust belt around the star with a radius smaller than 4 AU. Its shape also hints on the presence of a warmer belt closer to the central star, but this hypothesis needs confirmation. The identity of the detached turquoise blob to the left of the star is unknown: it could be either a real object or plain noise fluctuation (see main text).

In addition to the “One Ring” described above, the elongated shape of the source in Figure 2 suggests the presence of a warmer (T ~ 90 K) dust belt with size 0.8 AU, but the authors don’t seem to be completely sure about its nature yet.

Now, if you’re asking yourself what that blob of emission to the lower left of Proxima Cen in Figure 2 could possibly be, the short answer is: we don’t know yet. The long answer is that it could either be a real source or it could totally be just random noise fluctuation. If it is a real source then the authors suggest many explanations, such as a background galaxy or a collision between large bodies. But the most intriguing explanation for this potential source is that we could be looking at the rings of a Saturn-like planet orbiting Proxima Cen. More observations will be needed to confirm this exciting possibility, though.

But wait, there’s more! Figure 3 below depicts the image as observed by the compact array configuration of ALMA, using the 7-meter antennas: what seems to be a second dust belt is seen as a series of green smudges at a distance of approximately 30 AU, and is represented by the white ellipse. Although the detection is very marginal, the authors propose that this could be an outer dust ring with 1/10,000 the mass of Earth. 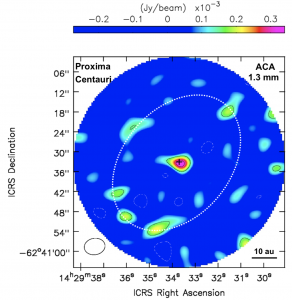 Figure 3. Image of Proxima Centauri using ALMA’s compact array configuration (7-meter antennas). The dotted white ellipse marks the position of a dust belt of radius 30 AU. The green regions are the positions where the signal produced by the dust belt is stronger.

I know, I know, that was a lot to take in! Proxima Centauri suddenly seems a lot busier than we previously thought, likely sporting a rocky planet in its habitability zone and a Kuiper Belt-analog. The other possibilities, such as the Saturn-like ringed planet and the other dust belts are still a bit speculative, so further observations of the system are a no-brainer at this point.