Title: DETECTION OF A MILLIMETER FLARE FROM PROXIMA CENTAURI 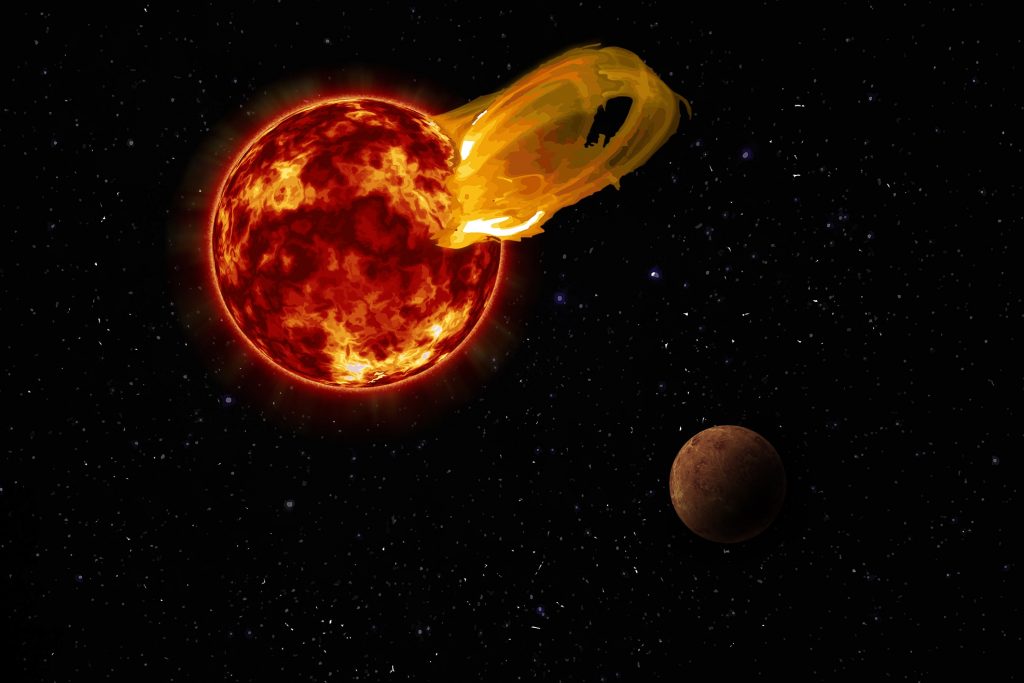 Warning – how you analyse your data can entirely change the interpretation of your results. Today’s paper shows the importance of multiple teams of scientists looking at the data and considering alternative explanations.

Our paper concerns Proxima Centauri, our nearest star which has attracted much interest for having a potentially rocky planet Proxima b. It uses the same radio wave data from the Atacama Large Millimetre Array (ALMA) and the Atacama Compact Array (ACA) but reaches very different conclusions to the original analysis led by Anglada (covered in astrobites previously).

Anglada’s team observed Proxima Centauri at a wavelength of 1.3mm (short radio waves). They observed twice using the ALMA array (all 41 12m dishes), and thirteen times using the ACA (8-11 7m dishes) between January and April 2017. Proxima Centauri appeared as an unresolved point source ~ 200 μJ brighter than expected in the ACA data. Anglada’s team interpreted this as a cold belt of dust less than 4 AU from the star. As this excess emission was not detected in ALMA, it must be below ALMA’s sensitivity level at radii greater than ~1.3 AU.

When the authors of today’s paper reanalysed all of Anglada’s ACA data together, the star showed significant excess emission, 334 ±48 μJ, consistent with  Anglada’s result of 340 ±60 μJ. However, the authors then looked at the thirteen observations individually to see if the star’s brightness changed. They did not detect any significant variation in the first twelve observations but the final observation was significantly brighter, 1.17 ±0.1 mJ (see Figure 2). The total brightness of this final observation is so high that it dominates when averaging all the observations together, giving the 334 μJ measured previously.

Splitting the thirteenth observation into two second time intervals, the authors saw the excess emission is only detectable for a couple of minutes in the 46 minute observation. The steep rise and more gradual fall looks like flares of Proxima Centauri observed at other wavelengths. The peak brightness is ~ 100 ± 4 mJ, nearly 1000 times the quiescent level measured by ALMA!

Figure 2: Millimetre observations of Proxima Centauri (position marked by the blue star) from ACA. Left, all thirteen observations. Middle, the first 12 observations. Right, the final observation: only here is excess emission at Proxima Centauri detected. Black lines mark the contour levels of rms noise in each image. Far right: the large increase in flux density or brightness is evident for the short duration of the flare. Figure 2 from today’s paper.

As all the excess emission is detected in a small fraction of the ACA observations, there is no significant excess quiescent emission, meaning no need for a dust belt between 1-4 AU. The authors also offer alternative explanations for Anglada’s marginal detections of a warm belt at 0.4 AU and outer belt at ~ 30 AU. The slight excess in emission detected in the ALMA observations attributed to a warm belt at 0.4 AU could be due to coronal heating of the photosphere caused by continual smaller flares, as seen in another active M dwarf, AU Mic. Slight excess emission attributed to an outer belt at 30 AU may be due to the large number of known background sources behind Proxima Centauri in the galactic plane.

The radio wave flare in today’s paper not only makes Proxima Centauri 1000 times brighter than usual at this wavelength, the peak brightness of the flare is ten times greater than observed in solar flares! Flares at this wavelength are also strongly associated with extreme X-ray emission, which could have been observable at the same time. Other observations show Proxima Centauri produces a large X-ray flare every few days and visible wavelength flares several times a day. Together with the radio wave flare, they demonstrate that Proxima Centauri is a very active star.

Whilst Proxima b is in the region where liquid water could exist, this is 20 times closer to its faint red star than the Earth is to the Sun. This proximity exposes the planet to much higher levels of radiation from flares. If flares are so strong and frequent, they may have stripped the planet of any atmosphere and liquid water, casting further doubt on the habitability of Proxima b.