Earth just got a new neighbor.  Proxima Centauri, the closest star to Earth at just 4.22 light years away, appears to host a planet, but not just any planet.  The planet, Proxima b, is potentially Earth-mass and lies within the habitable zone where liquid water might exist on its surface. The quest for a truly Earth-like planet is the Holy Grail of exoplanet research.  The fact that we might have to go only one star over to find another habitable planet indicates that Earth-like planets are either very common or that we got very lucky.  Whatever the case, this makes Proxima b one of the most interesting planets in the search for extraterrestrial life. 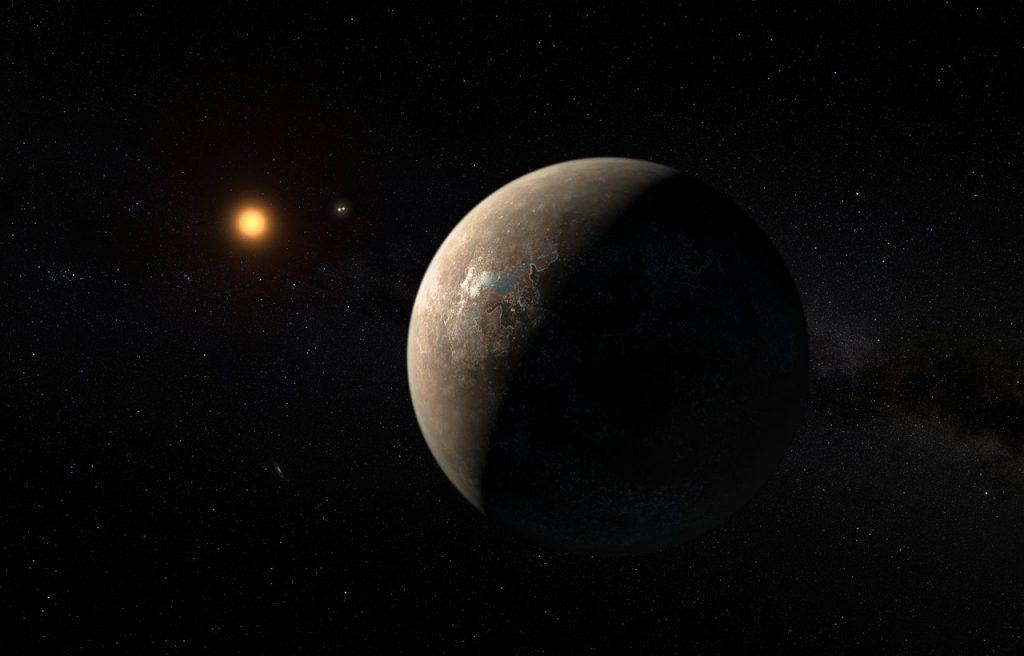 Figure 1:  This artist’s impression shows the planet Proxima b orbiting the red dwarf star Proxima Centauri, the closest star to the Solar System. The double star Alpha Centauri AB also appears in the image between the planet and Proxima itself. Proxima b is a little more massive than the Earth and orbits in the habitable zone around Proxima Centauri, where the temperature is suitable for liquid water to exist on its surface.  Image and caption credit: ESO.

How the discovery was made

Proxima b was discovered by measuring its gravitational effect on its star using the radial velocity method (also known as the Doppler or wobble method). Just like how the star pulls on the planet, the planet pulls on the star. Usually, Earth-mass planets are too small to have a measurable effect on their stars.  Earth, for example, only causes an 8 cm/s shift in the Sun’s velocity over the course of a year, which is currently beyond our technological limits to measure.  However, because Proxima Centauri is so small and the planet is so close, Proxima b caused a much more detectable 1.38 m/s shift over its much shorter (and therefore more detectable) orbital period of 11 days.

These small shifts in the star’s velocity caused by the planet’s gravity are measured using spectroscopy. Stars emit light across the electromagnetic spectrum. However, elements and molecules in the upper atmosphere of the star absorb very precise regions of the spectrum called spectral lines.  Because of the Doppler effect, the location of these lines shift depending on the velocity of the star.  Therefore, astronomers can measure the velocity of a star as a function of time by measuring how these spectral lines shift.  If the star’s velocity moves up and down periodically, this indicates the existence of a body orbiting the star, with the magnitude of the shift depending on the body’s mass and distance.  The velocity measurements for Proxima Centauri are shown below. 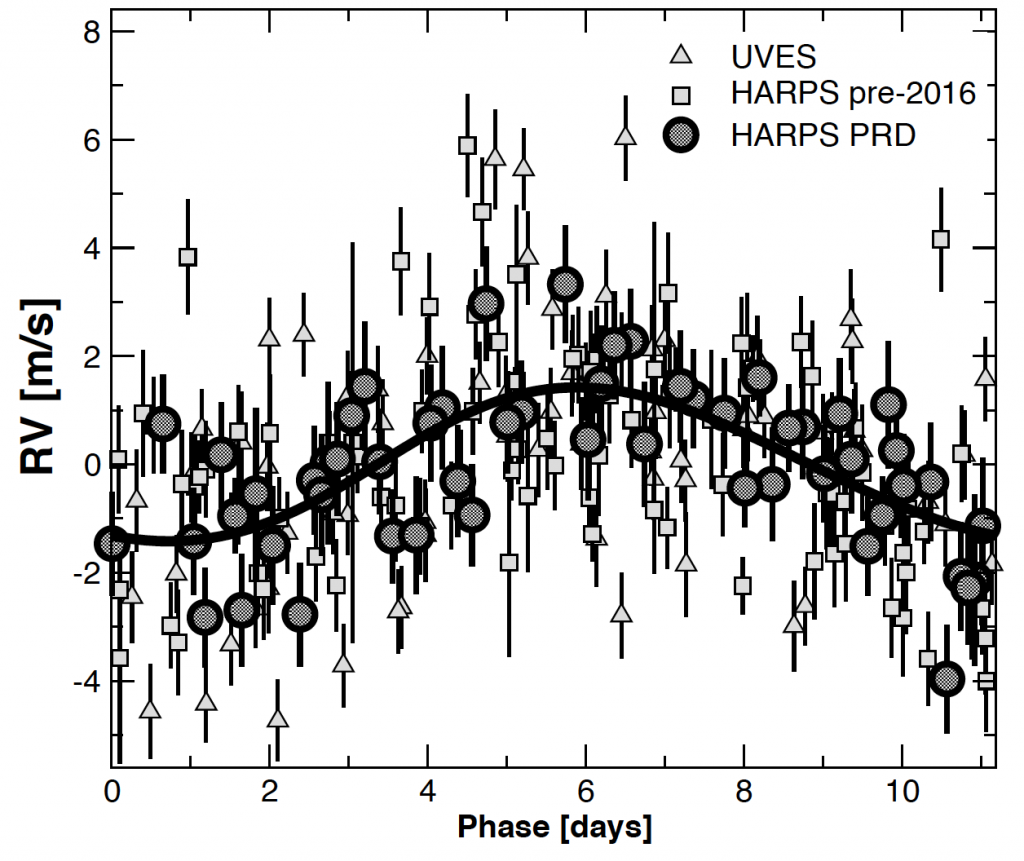 Figure 2:  Radial velocity measurements of Proxima Centauri using UVES data and two periods of HARPS data.  The data is phase-folded, meaning that the measurements of each 11.2 day period are plotted on top of one another.  The sinusoidal nature of the measurements indicate the existence of a planet orbiting the star.

Things are never quite as easy as they sound though.  Spectra are very complicated things.  First, you need a very stable instrument to measure the velocities of stars down to just 1 m/s over the course of months or years.  The instruments used to discover Proxima b, HARPS and UVES, are two of the most stable and precise spectrometers in the world, each being stable to about 1-2 m/s over a long timespan.  Other factors, such as turbulence in the air, can cause fake velocity shifts in the data that can be extremely difficult to correct for.

The star’s innate variability and magnetic activity can also mimic the signal shown by planets.  Improper correction of stellar activity led to the disproving of the suspected Earth-mass planet around Proxima Centauri’s neighbor, Alpha Centauri B.  Due to this major confounding factor, the authors were very careful to separate any signals of activity from the planetary signal.  Much of the activity works on the same timescale as the star’s rotation rate.  The 88 day rotation period of the star doesn’t match the 11.2 day period of the planetary signal, nor is it a multiple of the planet’s period, which gives credibility to the planetary hypothesis.  Magnetic activity can also change the shape of the spectral lines, which can induce a planet-like radial velocity signature in the data.  Several spectral lines that are especially sensitive to these changes were carefully examined, and the shifts in these lines did not correlate with the planetary signal.  All other explanations for the 1.38 m/s shift over 11.2 days having been disproved, this confirms the signal as being caused by a planet.

The planet: Proxima b

Very little can be said about Proxima b.  The radial velocity technique only measures the minimum mass of the planet, which in this case is 1.27 times Earth’s mass.  The exact mass depends on whether we’re seeing the planetary system edge-on, in which case it would be 1.27 Earth-masses, or whether we’re seeing it at some angle, in which case it would be larger (although it’s likely to be mostly rocky in almost all orientations).

Proxima b even lies in the habitable zone, even when conservatively defined.  However, there’s always a catch.  The habitability of red dwarfs has been heavily debated for years.  Two commonly cited problems with the habitability of red dwarf planets are tidal locking and stellar activity.  Tidal locking, where a planet shows the same face to its star all year long, leads to extreme temperature variations, which likely impede life.  For example, water vapor from the hot, sunny side might move to the cold, dark side and freeze out of the atmosphere, forever locking it up as ice.  X-ray and UV radiation from stellar flares, more common on red dwarfs, could also sterilize the surface.  On the other hand, there are some astronomers who say that these two issues are overblown and that these are not fatal problems for the formation and evolution of life on these planets.

Future research on Proxima b will undoubtedly look for a potential planetary transit of Proxima Centauri.  A transit allows for the measurement of the planet’s radius, which when combined with the radial velocity measurements, leads to the planet’s mass and density as well, which could prove or disprove Proxima b as a rocky planet.  However, the geometric probability of it transiting is only 1.5%, so it’s unlikely to occur.  But if it doesn’t transit, nothing much can be done to characterize the planet until the next generation of telescopes comes online with the (potential) ability to directly image Proxima b and actually measure its temperature and composition to more definitely determine its habitability.

Whatever future research may hold, for now, Proxima b is the closest potentially habitable exoplanet to the Earth.  In Galactic terms, it’s literally right next door.