Recently, in August 2016, it was announced that a planet had been discovered in orbit around the nearest star to the Sun, Proxima Centauri, about 4 light years away from Earth. This planet, Proxima b (“Earth’s Nearest Neighbor”), is impossible to image directly with current technology, but we know it is there from the wobble of its host star. As both the planet and the star revolve around their common center of mass, the star’s radial (line-of-sight) velocity changes periodically. Generally, high-mass planets in close proximity to low-mass stars are easiest to detect. The Earth, for example, would only cause a minute change of at most 9 cm/s in the Sun’s radial velocity (RV), when observed from far away, but the configuration of the Proxima system results in a change as large as 1 m/s (see Figure 1). This effect is measurable using a stabilized, high-resolution spectrograph to track the Doppler shift of features in the stellar spectrum. You can find out more about the radial velocity method here and here. 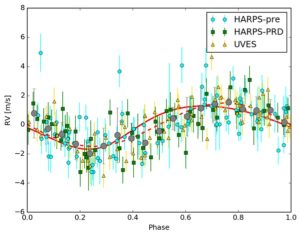 Figure 1: The changing radial velocity of Proxima Centauri, folded at the best-fit orbital period of Proxima b (and corrected for correlated noise, see in the text for details), so that the planet’s periodic signal is highlighted. The different colored symbols indicate different subsets of the data, while the gray symbols indicate average values. The solid and dashed red curves show the eccentric and circular best-fit orbit models, respectively. (Figure 3 from the paper.)

However, it is still a challenge to make sure that the measured signal is not spurious, but actually caused by a planet. For instance, the variability and magnetic activity of a red dwarf star like Proxima Centauri could alter its spectrum, causing apparent changes in the observed RV curve, that could be mistaken for the signature of a planet.

The authors of today’s paper aim to confirm the detection of (planet candidate) Proxima b, using the same RV data as the authors of the original discovery paper, but taking a different approach to the data analysis: They try to account for stellar activity by directly modeling the effect of an active region on the RV curve, making use of Gaussian processes.

Gaussian processes are a powerful probabilistic (yet computationally expensive) tool to model noisy data, when a component of the noise is, in some way, expected to be correlated from one measurement to the next (see this tutorial for more details, or this book for all the details). In addition to terms describing instrumental noise, a suitable model for correlated RV noise has to include at least two more terms. First, a decaying term, because an active region on the star’s surface would be expected to have a limited lifetime or change in size. Second, a periodic term, because a region could disappear from view as the star rotates and reappear again later. Ultimately, it is necessary to introduce four extra parameters to be able to describe the noise properly. These parameters can be inferred from the data, together with the rest of the model parameters, most importantly the planet’s orbit parameters and its mass.

When fitting a one-planet model to the RV curve, in combination with this kind of noise model, the authors indeed find a 90-day periodicity of the correlated noise component that corresponds to the rotation period of Proxima Centauri (see Figure 2), matching previous measurements based on long-term monitoring of the star’s light curve. It is therefore reasonable to assume that any periodicity has to be tied to the stellar rotation, to improve constraints on the remaining model parameters. Furthermore, the inferred noise decay timescale suggests that the responsible active regions on Proxima Centauri have a typical lifetime of approximately one year. 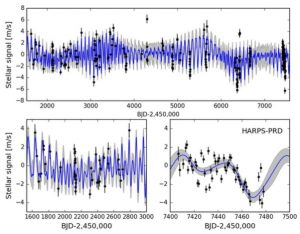 Figure 2: The radial velocity of Proxima Centauri over different time intervals (black data points), when subtracting the signal of Proxima b using the best-fit orbit solution, to focus on the correlated noise caused by stellar activity (blue curve with error bands). Note that BJD stands for Barycentric Julian Day. (Figure 5 from the paper.)

The best-fit orbit solution for Proxima b is consistent with the one reported in the discovery paper, as anticipated. The planet’s orbit has a period of about 11 days and is probably close to circular. Its minimum mass, which can also be inferred from the RV curve, is about 1.2 times that of the Earth. This means Proxima b is a potentially Earth-mass planet in the habitable zone of Proxima Centauri (where liquid water might exist on the surface), which makes it a very interesting target in the search for extraterrestrial life.

The authors also fit a two-planet model to the RV curve, but find no convincing evidence for the existence of a second planet. Nevertheless, they have solidly confirmed the detection of Proxima b in RV measurements, and learned something about the activity of Proxima Centauri in the process. They have also demonstrated that it is essential to consider different noise models to check that the detection of a planet is reliable, and to pursue improvements in the methods of data analysis, because in the end, noise matters.