To date, we have confirmed more than 1500 extrasolar planets, with over 3300 other planet candidates waiting to be confirmed. These planets have been found with different methods (see Figure 1). The two currently most successful are: the transit method and the radial velocity method. The former measures the periodic dimming of a star as an orbiting planet passes in front of it, and tends to find short-period large-radius planets. The latter works like this: as a planet orbits around its host star, the planet tugs the host star causing the star to move in its own tiny orbit. This wobble motion —which increases with increasing planet mass— can be detected as tiny shifts in the star’s spectra. We just found a planet.

That being said, in our quest to find even more exoplanets, where do we invest our time and money? Do we pick one method over another? Or do we spread our efforts, striving to advance all of them simultaneously? How do we assess how each of them is working; how do we even begin? Here it pays off to take a stand, to make some decisions on how to proceed, to set realistic and achievable goals, to define a path forward that the exoplanet community can agree to follow. 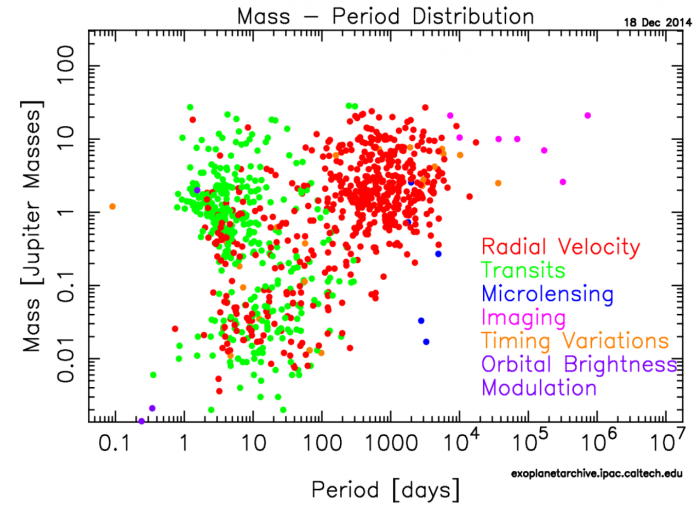 Figure 1: Currently confirmed planets (as of December 2014), showing planetary masses as a function of period. To date, the radial velocity method (red), and the transit method (green), are by far the most successful planet-finding techniques. Other methods include: microlensing, imaging, transit timing variations, and orbital brightness modulation. Figure 42 from the report.

To do this effectively, and to ensure that the US exoplanet community has a plan, NASA’s Exoplanet Exploration Program (ExEP) appoints a so-called Program Analysis Group (ExoPAG). This group is responsible for coordinating community input into the development and execution of NASA’s exoplanetary goals, and serves as a forum to analyze its priorities for future exoplanetary exploration. Most of ExoPAG’s work is conducted in a number of Study Analysis Groups (SAGs). Each group focuses on one specific exoplanet topic, and is headed by some of the leading scientists in the corresponding sub-topic. These topics include: discussing future flagship missions, characterizing exoplanet atmospheres, and analyzing individual detection techniques and their future. A comprehensive list of the different SAGs is maintained here.

The questions this SAG studied can roughly be divided into three categories:

3:  Finding planets with the radial velocity technique requires large amounts of observing time. We thus have to account for what telescopes are available, and how we design effective radial velocity surveys.

We won’t talk so much about the last category in this astrobite. But, let’s dive right into the former two.

Astronomical instruments that measure radial velocities —called spectrographs— are, too, limited in sensitivity. Their sensitivity is to a large extent controlled by how stable they are over long periods of time. Various environmental factors —such as mechanical vibrations, thermal variations, and pressure changes— cause unwanted shifts in the stellar spectra, that can all masquerade as a radial velocity signal. Minimize such variations, and work on correcting —or calibrating out— the unwanted signals they cause, and we increase the sensitivity. Not an easy job. 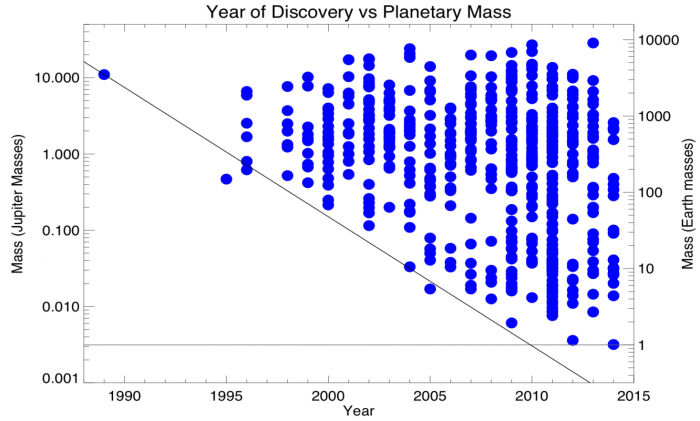 Figure 2: Masses of planets detected with the radial velocity technique, as a function of their discovery year. More planets are being found each year, hand-in-hand with increasing instrument sensitivity. For transiting planets the actual masses are plotted, otherwise the minimum mass is plotted. Figure 43 from the report.

Still, it can be done, and we are getting better at it. Figure 2 shows that we are finding lighter and lighter planets — hand-in-hand with increasing instrument sensitivity: we are able to detect smaller and smaller wobble motions. Current state-of-the-art spectrographs are, in the optical, sensitive down to 1m/s wobble motions, and only slightly worse (1-3m/s) in the Near Infrared. To set things in perspective, the Earth exerts a 9cm/s wobble on the Sun. Thus, to find true Earth analogs, we need instruments sensitive to a few centimeters. The authors of the report note that achieving 10-20cm/s instrument precision is realistic within a few years — some such instruments are even being developed as we speak. Further push on these next generation spectrographs is strongly recommended by the authors; they support a path towards finding Earth analogues.

Having a perfect spectrograph, with perfect precision, would, however, not solve the whole problem. This is due to stellar jitter: the star itself can produce signals that can wrongly be interpreted as planets. Our ultimate sensitivity or precision is constrained by our physical understanding of the stars we observe.

Stellar jitter originates from various sources. The sources have different timescales, ranging from minutes and hours (e.g. granulation), to days and months (e.g. star spots), and even up to years (e.g. magnetic activity cycles). Figure 3 gives a good overview of the main sources of stellar jitter. Many of the sources are understood, and can be mitigated (green boxes), but other signals still pose problems (red boxes), and require more work. The blue boxes are more or less solved. We would like to see more green boxes. 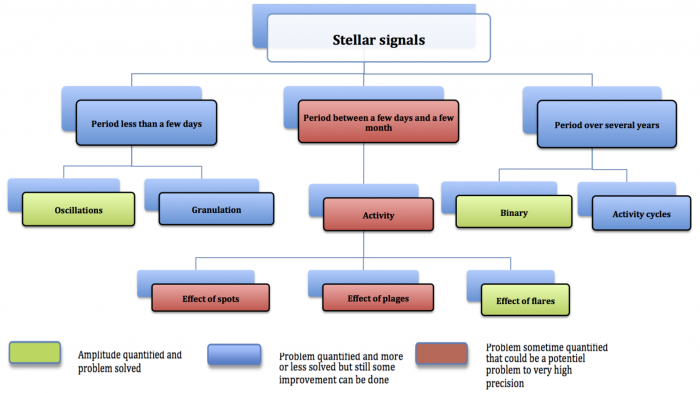 Figure 3: An overview diagram of stellar jitter that affects radial velocity measurements. Note the different timescales. Green boxes denote an understood problem, but the red boxes require significant more work. Blue boxes are somewhere in between. Figure 44 from the report.

The radial velocity method is one way to discover and characterize exoplanets. In this report, one of NASA’s Study Analysis Groups evaluates the current status of the method. Moreover, with input from the exoplanet community, the group discusses recommendations to move forward, to ensure that this method continues to be workhorse method in finding and characterizing exoplanets. This will involve efficiently scheduled observatories, and significant investments in technology development (see a great list of current and future spectrographs here), data analysis and in our understanding of the astrophysics behind stellar jitter. With these efforts, we make steps towards discovering and characterizing true Earth analogs.

Full Disclosure: My adviser is one of the authors of the SAG white paper report. I chose to cover it here for two reasons. First, I wanted to further your insight into this exciting subfield, and secondly, likewise, my own.