Now, the authors of this paper are able to validate Kepler-167e, a Jupiter-sized planet that receives about the same amount of the stellar radiation as Jupiter does, making it the very first validated transiting Jupiter analog! It orbits around a 0.77 solar-mass K-type star with 2 previously validated close-in Super-Earths at less than 0.15 AU as well as a 3rd close-in Super-Earth candidate that the authors are also able to validate in this paper.

Figure 1: Two planets in the Kepler-167 system are already validated. However, these two planets (light curves shown above) were not validated until this paper. The bottom light curve, with a transit duration of 16 hours, would correspond to a Jupiter-size planet at a few AU.

To qualify as a Jupiter analog, a planet must have a radius close to Jupiter’s (for those found through transits) or a similar mass (for those found with radial velocity). It must also receive an amount of stellar radiation that indicates it formed a little bit beyond the snow line just like Jupiter.

Radial velocity measurements have already found 20 of these planets, while transit searches have found none.

The transit method has been less successful at finding Jupiter analogs because spotting a planet requires seeing it complete at least one full orbit if we want to catch two or more transits. Thus, a planet at a Jupiter analog distance requires at least several years of data to be noticed – if not more – while the Kepler mission only lasted 4 years.

Furthermore, planets at large distances from theirs stars are much more likely to be misaligned so that they never pass in front of their stars from our point of view on Earth.

How can astronomers validate transiting planets?

An alternative to confirmation is statistical validation, in which statistical techniques are applied to show that it is extremely unlikely (< 0.3%) for a transit to be explained by a source other than a planet orbiting the observed star (known as a false positive). Planets in multi-planet systems like Kepler-167 are typically easier to validate since their transits provide multiple sets of data for the same star. However for this system, the two still unverified planets were not initially caught by Kepler’s automated pipeline when they transited. As a result, we do not have data of their star’s motion during their transits that would make it simpler to verify them.

Since Kepler’s data is not enough, the authors make use of previous Keck observations of Kepler-167 that measured its color index, a proxy for the peak temperature of its spectrum that is determined using just two filters. They also use Keck to take their own follow-up observations of a faint secondary star very close (2”) in the sky to Kepler-167.

The authors also employ the BLENDER technique – which has previously been used to validate other planets and has previously been covered in another Astrobite – in conjunction with the observations. They simulate “blends” of what light curves would like if an unseen star along the same line of sight blended with the target star while it experienced its own transit to produce a “false transit shape” not caused by a planet around the target star. These false positive scenarios can happen in a variety of ways, including:

These three cases involving a transit of a hidden, unknown secondary star are much harder to rule out than any other type of potential false positive since this star can be almost any mass at a wide range of distances, creating the potential for many different transit shapes.

From here, the authors’ strategy is simple. For Cases 1 and 2, they use BLENDER to find which combinations of stellar masses and distances could produce the same transit shape as the one thought to be caused by a planet orbiting Kepler-167. For Case 3, they model transits from different stellar masses and also planet radii instead of distance. Once they constrain which parameters can create the observed transit shape, they then rule out parts of the parameter space that cannot match Kepler-167’s observed color index. Additionally, they can also rule out stars that should be bright enough to have been seen. If nothing remains, then none of these 3 cases can account for the transit, thereby validating the planet.

For Case 1, BLENDER can match the transit only if the more massive star in the background binary is twice as massive as Kepler-167. For Case 2, a much wider range of background stars between 0.25 and 1.0 solar mass can fit the data. For Case 3, only companion stars more massive than the primary can mimic the transit. Though, none of these remaining parameters can also match Kepler-167’s color index without being bright enough to be seen (See Figure 2). Thus, the authors have no trouble with the validation. The Jupiter analog candidate must be a planet!

Figure 2: The parameters that could mimic the Jupiter analog’s transits (Case 1, Case 2, Case 3). Black regions are more likely to match the transit, orange regions are less likely, and white regions cannot match the data. The blue regions show parameters that cannot match Kepler-167’s color index. The green regions show parameters of stars that should be bright enough to have already been seen, but were not. Since no black or orange regions fall outside the green and blue regions, Kepler-167e is validated as a planet.

The authors use the same technique to try to confirm the 3rd close-in planet in the system. While BLENDER is successful in ruling out enough parameters of hidden stars, it cannot rule out that the planet might orbit the known secondary star. By using their Keck observations of that star’s color index, they manage to confirm this planet as well. 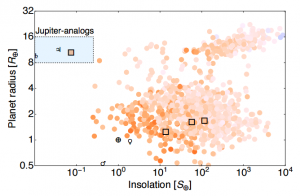 Figure 3: The radii and amount of stellar radiation received by all transiting exoplanets (orange circles), Kepler-167’s planets (orange boxes), and the planets in our solar system (their symbols). The blue box shows the author’s definition of a Jupiter analog, which includes Saturn (left), Jupiter (center), and Kepler-167e (right) — all of which lie beyond the snow line.

The authors use Kepler-167e’s light curve to measure its radius to be 10.2 Earth radii, a shade under Jupiter’s radius of 11.2. Its 2.9 year orbit corresponds to an amount of stellar radiation less than double that of Jupiter, easily placing it beyond its system’s snow line. (See Figure 3.) Additionally, they utilize a new method that uses the light curves all four planets to measure the planet’s eccentricity to be 0.06, the first such measurement that does not involve separate non-transit information such as spectroscopy.

The authors estimate that there may be about 10 Jupiter analogs in Kepler’s data. Though, even those like Kepler-167 with periods less than 4 years may not have transited twice in Kepler’s lifetime. (This recent Astrobite discusses several Jupiter analog candidates with only one recorded transit.)

They also hope that we can spectroscopically follow-up on Kepler-167e’s next transits to also learn about its atmosphere, which we cannot study in the Jupiter analogs discovered with radial velocity measurements.

We might have to wait for the next generation of exoplanet surveys (including those involving microlensing!) for the discovery of a plethora of Jupiter analogs, but Kipping et al. have given us another good place to start just from Kepler’s transit data.