Hot Jupiters are lonely planets. Though they have the warming company of their nearby host star, their systems are generally found to be void of planetary counterparts. Of the over 200 hot Jupiters systems known to us, only 9 systems have been found to have planetary companions to the hot Jupiters, and all of these companions reside in orbits much farther away from their host star (hot Jupiters by definition have orbits of less than 0.1 AU, see figure 1). Though more of these systems are likely to have outer planets hiding in long-period orbits (since it is intrinsically harder to detect smaller planets far from their star), it is unexpected for hot Jupiters to have close-in companions. This is because hot Jupiters are believed to be the bullies of the planetary playground – as they migrate inward from the outer regions where they formed they gravitationally destabilize the orbits of any smaller planets that were residing closer to the star, causing these planets to either fall into their star or be flung from the system. However, today’s paper reports the discovery of two planets sandwiching a hot Jupiter with their compact, close-in orbits, proving that some hot Jupiters can be much more friendly with their stellar approach. 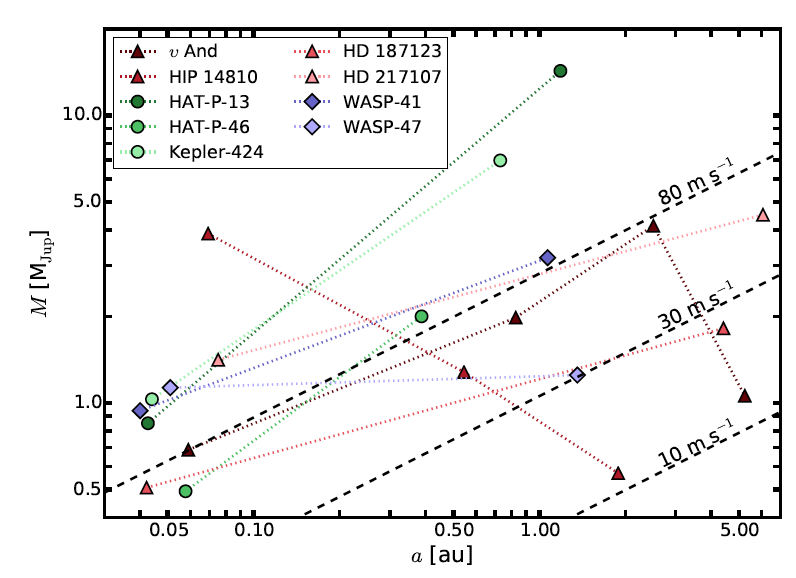 Figure 1. Known multi-planet systems containing a hot Jupiter, not including the two planets announced in Becker et al. The hot Jupiters are on the left (<0.1 AU) with their companions on the right. Planets of the same system have the same colored symbol, and have dotted lines connecting them. The black dashed lines represent the radial velocity amplitudes if these planets were orbiting a solar-mass star. Figure 11 in Neveu-VanMalle et al. 2015.

With the malfunction of the Kepler Space Telescope’s second of four reaction wheels, the successful planet-hunting telescope was no longer able fix its gaze on a single piece of the sky for long periods of time. Since last summer, the revived Kepler K2 mission has taken advantage of the crippled satellite’s amazing optics to continue the search for exoplanet, though now it focuses on different patches of the sky for about 80 days at a time (see this astrobite for more details). Though this means Kepler can no longer discover longer-period planets, it has the benefit of intersecting regions that have been observed by other planet-hunting missions, such as the Wide Angle Search for Planets (WASP). Earlier this year, Kepler’s field of view contained the star WASP-47, a star already known to have a transiting hot Jupiter. Visual inspection of the Kepler data revealed that it was much more than that – two other planets were found transiting WASP-47, a super-Earth sized planet just inside the hot Jupiter’s orbit and a Neptune-sized planet just outside (figure 2). 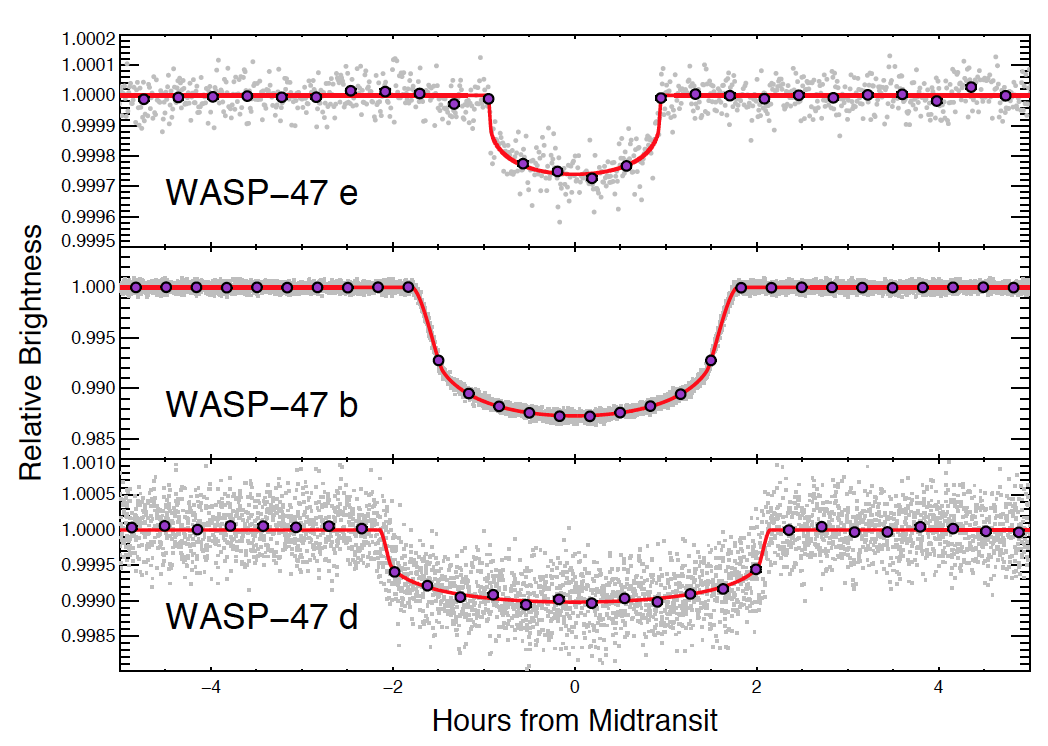 Figure 2. The K2 light curves of the three close-orbiting planets of the WASP-47 system: the inner planet (top panel), the Hot Jupiter (middle panel), and the outer planet (bottom panel). The duration of the “dips” is longer for planets that orbit farther from their star, since it takes these planets a longer time to transit the star. Figure 1 in Becker et al.

The transit method is good at measuring planetary radius and orbital period, but does not immediately tell us anything about a planet’s mass (this is usually done by using the radial velocity technique to measure the wobble of a host star from its planet’s gravity). The authors, however, were able to take advantage of this unique, close-in system to measure the masses of the planets using transit timing variations (TTVs), which entail tracking how the time at which a planet transits its star changes due to gravitational perturbations caused by the other planets in the system. The ability to uncover TTVs in these exoplanets hinged on a few unique properties of the WASP-47 system: all three of the planets are large, all three are close together, and the period of the TTV was shorter than Kepler’s observing time of that field. Transit timing variations for the three planets are shown in figure 3. Using this method, mass estimates were achieved for the Jupiter-sized and Neptune-sized planets, and an upper limit was put on the mass of the smaller super-Earth. These mass estimates agree with simulations that were run to test the long-term stability of such a system, and along with the transit observations and TTVs allow the authors to declare these bona fide planets. 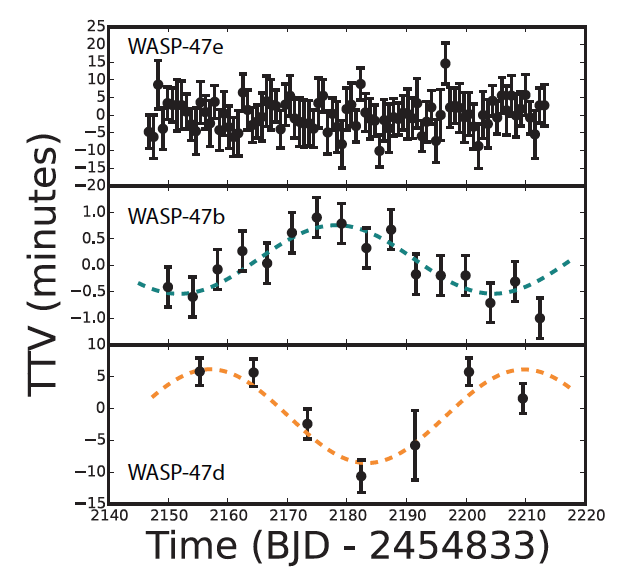 Figure 3. Transit Timing Variations for the inner super-Earth (top), the hot Jupiter (middle), and the outer Neptune (bottom). The teal and orange dotted lines are overlaid sine curves with a period of the TTV, but are just meant to guide the eye as the true TTV is not an exact sinusoid. Figure 2 in Becker et al.

Another planet joins the party

To make matters even more interesting, the authors of today’s paper were not alone in recently searching for more planets around WASP-47. A concurrent study by Neveu-VanMalle et al. found there to be yet another planet around WASP-47, adding to the system’s already baffling architecture and further constrain how the planets could have gotten to be where they are today. This planet (WASP-47c) was found by utilizing the CORALIE spectrograph and the radial velocity method, determining it to be a Jupiter-sized planet at an orbital distance of about 1.5 AU.

Peaceful journey to a WASP’s doorstep

Before this discovery, all hot Jupiters were found to be the lone close-orbit planet in their system, and a lack of TTVs in the light curves of transit-identified hot Jupiters supported this dearth of nearby planets. This scarcity supports the idea of high eccentricity migration; hot Jupiters would form beyond the ice line of their system and through some interaction get thrown on a highly eccentric orbit that circularizes very close to their host star. This process would destabilize the orbits of short-period planets, leaving a void of planetary counterparts in the vicinity of the now hot Jupiter. This discovery does not discount the high eccentricity migration model, but definitely means that there must be other formation mechanisms of hot Jupiters. Two possibilities are that the planets of WASP-47 migrated together in a disk or some damping took place near the end of migration to bring the planets to their present compact architecture. Needless to say, the dynamically quiet and peaceful orbital evolution of WASP-47b will lead to many follow-up studies of this system and new inquiries to the possible migration mechanisms of hot Jupiters.