Planets can be sorted, very roughly, into two categories: gas giants and terrestrial planets. Gas giants (like Jupiter, Saturn, Uranus, and Neptune) have huge, thick atmospheres of hydrogen, helium, and other gases, while terrestrial planets (like Mercury, Venus, Earth, and Mars) are composed mostly of rock and metals, perhaps with a thin atmosphere. According to the core accretion theory of planet formation, once a growing planet reaches a certain mass, it starts accreting gas faster and faster until it’s gathered up all the gas around it. If the planet never reaches this critical core mass, it remains a rocky planet. This theory helps explain why the gas giants in our solar system are all more massive than the terrestrial planets.

How can we tell whether an exoplanet is rocky or gaseous? One way is to calculate its density by measuring its mass (with radial velocity observations) and radius (with transit photometry). The density of the planet can indicate its composition (see Fig. 2). The authors of this paper were interested in measuring the density of two planets in the Kepler-10 system.  The Kepler satellite had already discovered the two planets and measured their radii and orbital periods. Previous radial velocity (RV) measurements had attempted to measure the planets’ masses and determined that Kepler-10b was probably rocky. However, those observations could only put an upper limit of 20 Earth masses on Kepler-10c, and there was still a lot of uncertainties in the densities of both planets. The authors decided to observe the Kepler-10 system intensively with the High Accuracy Radial velocity Planet Searcher North (HARPS-N) spectrograph. 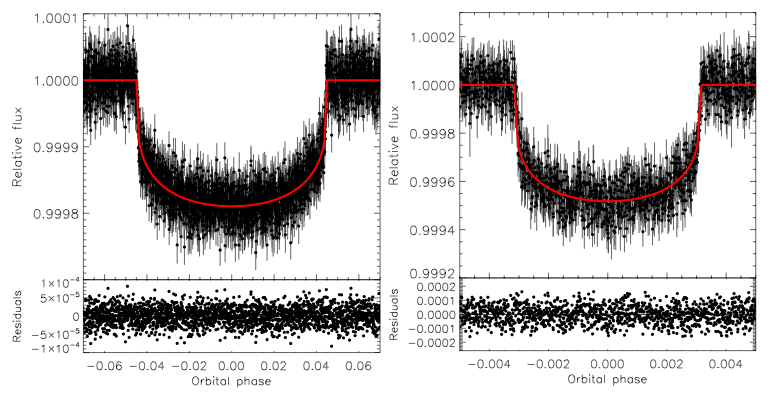 Fig. 1: Transits of Kepler-10b (left) and c (right), as measured by Kepler. The red line shows the best-fit solution.

Fig. 2: Radial velocity observations of Kepler-10b and c, as measured by HARPS-N. The black line shows the best-fit solution.

One of the goals of the HARPS-N collaboration is to measure the mass of small exoplanets with high enough precision to determine their internal structure and composition. Kepler-10 made a great target because Kepler-10b had already been confirmed as a rocky planet, and the star itself is fairly quiet, which reduces the noise in the RV observations. The authors observed Kepler-10 with HARPS-N about 148 times over two years, which allowed them to reduce the uncertainty in the mass of Kepler-10b by half, and to determine the mass of Kepler-10c for the first time.

The authors found that Kepler-10b is about three times the mass of the Earth and has a density of 5.8±0.8 g cm-3, which is very close to Earth’s 5.5 g cm-3, indicating that Kepler-10b probably has a similar internal structure and composition. Kepler-10c has an even higher density of 7.1±1.0 g cm-3, so it’s almost certainly rocky (with a significant amount of water), but its mass is over 17 times the mass of the Earth! That’s about the mass of Neptune, which is a gas giant, not a rocky planet. What’s going on here? 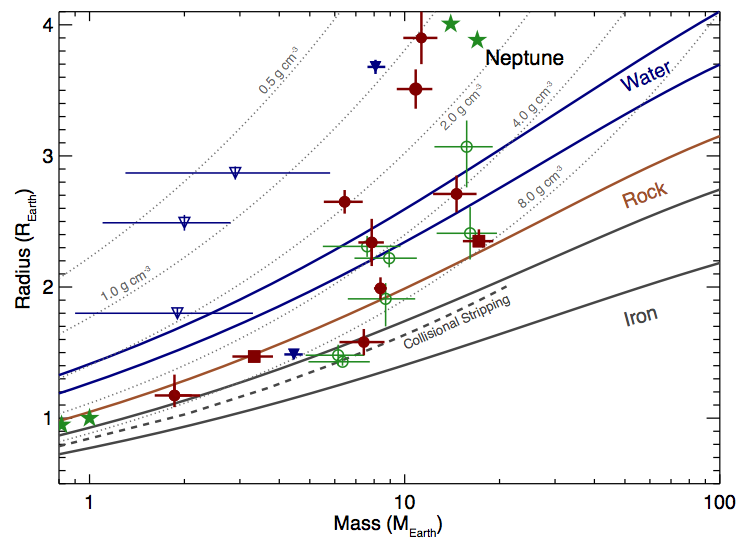 As it turns out, a more recent planet formation theory predicts that the critical core mass required to accrete gas depends on orbital period. This means that planets forming further from their star need to be more massive before they can become gas giants. According to this theory, Kepler-10c sits right at the transition between rocky and gaseous planet. Not only does Kepler-10c help support this new theory, but it’s also the first in a new category of rocky planets, with longer periods and higher masses, which one of the authors calls “mega-Earths“. An exoplanet in another system, Kepler-131b, may also qualify as one of these massive rocky planets, but its mass is still very uncertain. More observations are needed to determine if Kepler-131b has a high enough density to join the ranks of the mega-Earths.

The existence of mega-Earths is particularly exciting for the search for life, because we expect rocky planets to harbor life more easily that gas giants. Even though both Kepler-10b and c are too close to their star to support liquid water, this discovery indicates that there maybe a whole new class of planets that could harbor life!