Title: A Framework for Prioritizing the TESS Planetary Candidates Most Amenable to Atmospheric Characterization

Status: submitted to Publications of the Astronomical Society of the Pacific, open access on arXiv.

TESS, the Transiting Exoplanet Survey Satellite, is a follow-up to NASA’s wildly successful Kepler mission. TESS launched into orbit aboard a SpaceX Falcon 9 rocket on April 18, 2018. Over the course of the next two years, it will conduct an exoplanet survey covering nearly the whole sky. Unlike Kepler, TESS will be looking for planets around bright and nearby stars. These bright stars are ideal for follow-up observations with ground and space-based observatories. The follow-up observations will allow astronomers to learn more about these exoplanets. In particular, astronomers are hoping to determine their masses and atmospheric compositions.

An exoplanet’s mass can be found using the radial velocity method. By looking for periodic Doppler shifts in the star’s spectrum as the planet orbits, astronomers can determine how much the planet is pulling on the star. That allows us to calculate its mass. Since we can determine the planet’s radius through the transit method (which TESS uses), we can then calculate the planet’s density and determine what it is likely made of. For example, a low-density planet will most likely be a gas giant, while a high density planet is more likely to be made of rock.

Can you breath there?

In addition to figuring out exoplanet compositions, astronomers would also like to be able to characterize their atmospheres. This can be done through a process known as transit spectroscopy, where the host star’s spectrum before the transit is compared to the spectrum during the transit. As the planet transits, some of the star’s light is absorbed by the atmosphere, thus changing the spectrum. A similar method exists which relies on seeing how the star’s spectrum changes during the planet’s secondary eclipse (when the planet is behind the star). Figuring out what compounds are present in an exoplanet’s atmosphere is important because doing so can allow us to look for signs of life. It could even help us to discover extraterrestrial intelligence.

Most of the chemical signatures we would look for occur in the infrared, the very regime that the James Webb Space Telescope (JWST) is optimized for. TESS has a special design which will allow it to partner very well with JWST when it launches. Because of the positioning of TESS’s four wide-field cameras, it will have an area near the north ecliptic pole under constant observation for the first year, then an area at the south ecliptic pole for the second year. These areas are prime targets because they are a part of JWST’s “continuous viewing zone“, the area of sky that JWST can observe at any time of year.

Figure 1: A map showing the area of the sky TESS will cover. Note the areas at the pole which will be under almost continuous surveillance. Image credit: Goddard Space Flight Center.

How do we choose targets?

So, TESS’s mission has specifically been designed to make sure that astronomers can have an easy time doing follow-up observations. But in order to maximize their potential results, astronomers have to carefully decide which targets have the highest priority for follow-up observations. In particular, JWST is scheduled for a five year mission, so time is of the essence.

In today’s paper, Kempton et al. outline a series of criteria for determining which targets are of the highest value for follow-up observations. They do so using statistical methods based on the expected results from TESS. They split up the expected planet yield into three samples. The first is a large statistical sample containing a wide range of planet sizes. The second is small planets in and near their star’s habitable zone (ideal for looking for biosignatures). The final group of planets are terrestrial planets which could be observed via emission spectroscopy.

is the planet’s radius,

is the planet’s mass,

is the star’s radius,

is the star’s apparent magnitude in the J band. The scale factor normalizes their work to other similar studies.

Using this calculation, a higher TSM means a higher S/N, so it would be easier to determine the planet’s atmospheric spectrum. They also employ a similar emission spectroscopy metric (ESM) for planetary atmospheres observable through secondary eclipses. What’s notable in this calculation is that the variables required can all be found through radial velocity and transit observations. This means that we can determine the likely S/N from just a few prior observations.

Based on simulations of JWST’s optics, they determine the cutoff TSM and ESM for atmospheric characterization. For small terrestrial planets (both in and out of the temperate zone), the TSM should be larger than 10. Larger planets, from sub-Neptunes to sub-Jovians, should have TSMs above 90. In total, this should yield about 300 ideal targets for transmission spectroscopy and 20 for emission spectroscopy. 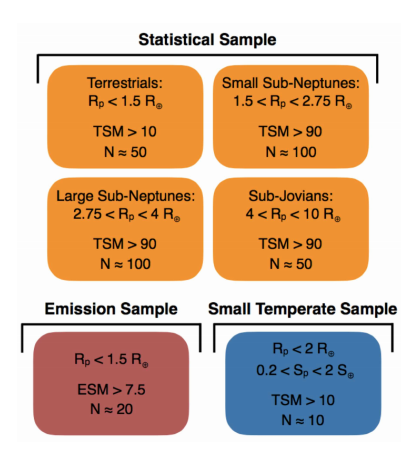 Figure 2: A table showing the cutoff TSM and ESM a planet should have to produce high-quality atmospheric spectra. Figure 5 in paper.

Future missions, like JWST, can use these results to identify high-value targets for atmospheric characterization. In addition, the European Space Agency’s planned Atmospheric Remote-sensing Exoplanet Large-survey (ARIEL) mission will be able to make even better observations, being optimized to study exoplanet atmospheres. Just a few decades ago, many astronomers were convinced that we would never be able to find exoplanets. And once we started finding them, people did not think we would be able to make any discoveries about them. But with the advance of technology, we are able to determine the composition of exoplanet atmospheres. We even stand on the verge of being able to directly image exoplanets. For exoplanet research, the future is bright.