Proxima Centauri b and The Significance of CO2

This summer marks the one-year anniversary of the detection of an exoplanet orbiting our solar system’s nearest stellar neighbor, Proxima Centauri. This Earth sized exoplanet, with the oh-so-imaginative name Proxima Centauri b, lies in the habitable zone of its M-dwarf star. As we’ve previously discussed, having such an Earth-like planet in our stellar backyard is really exciting, and astronomers are keen to explore the system as thoroughly as possible for potential signs of life. Figure 1 shows an artists’s rendition of this intriguing exoplanet. 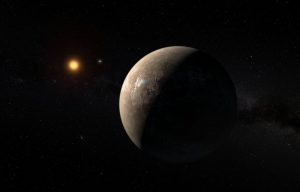 Since the discovery of this close planet, researchers have been studying methods that might detect the presence of life on Proxima Centauri b. Today’s paper by devising a method to detect  CO2 in the planet’s atmosphere. They focus on this particular molecule because it is one of the four main biomarkers used in evaluating habitability of exoplanets; water, methane, carbon dioxide, and oxygen are primarily produced during biological processes, so their presence in the atmosphere implies life. In addition to being a biomarker molecule, carbon dioxide (CO2) has many distinguishable features that are visible on the 15 micron band, which JWST is equipped to look at.

These researchers present a technique that can be performed with the soon-to-be-launched James Webb Space Telescope (JWST) which will reveal the presence of CO2 in the atmosphere of this nearby exoplanet. The emission in the 15 micron band will be ideal for detecting CO2, since this molecule has over 100 features within this band.

JWST is equipped with several extremely sensitive instruments. One of the goals of this mission is to detect and characterize atmospheres of exoplanets. With this in mind, these authors suggest using the medium resolution spectrograph (MRS) mode of the Mid-Infrared Instrument (MIRI) to detect CO2 markers in the atmosphere of Proxima Centauri b. 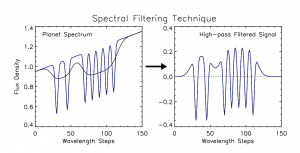 Figure 2: This shows an example planet spectrum and high-pass filtered spectrum. The high-pass image has more distinguishable features, which allows for greater sensitivity in molecule detection. Figure 1 in the paper.

This new technique combines several methods to attain greater sensitivity. The cross-correlation requires a high spectral resolution which finds the radial component of the planet orbital velocity that is used to filter out the planet’s signal.e his method cross-correlates the observed spectrum with template spectra; however, the spectral resolution is not high enough to achieve this with Proxima Centauri b, so the authors suggest a slight modification; use this method while targeting a specific feature in the spectrum. Proxima Centauri b is believed to be tidally locked, meaning that the same hemisphere always faces the star. This means at certain alignments, Proxima b will show a contrast of up to 100 ppm with respect to the star. This contrast will be helpful in separating planet signatures from the flux of the star. This method does not require absolute flux calibration, but only depends on the relative flux of the star and the planets. However, a limitation of this method is that the stellar spectrum must be precisely known beforehand, since the flux of the planet, even at its highest, is much smaller than the stellar flux.

The authors used atmospheric models of Proxima Centauri b to show the limits of their detection method in extreme cases and expected results which are shown in Figure 3. 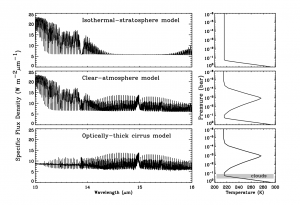 A Step Forward in the Search for Extraterrestrial Life

If we can detect exoplanet life or a habitable exoplanet so close to Earth, this could tell us more about how common life is in our universe and the origins of life in different environments. Until we find a way to accurately detect the presence of life, such as detecting CO2 in atmospheres, we won’t know the extent of life in all parts of the universe. Though we don’t know for certain yet, I for one hope that we can soon discover and say hello to our new alien neighbors, hopefully on Proxima b!