The search for life beyond Earth is built on two legacies. On the one hand, there’s SETI, the Search for Extraterrestrial Intelligence, which since Frank Drake’s Project Ozma in 1960 has focused on detecting electromagnetic signals from alien civilizations. (Well, signals or escaped noise.) On the other hand, following the boom in exoplanet detection, there is the search for the chemical signatures of life in the atmospheres of exoplanets. The usual approach to chemical biosignatures doesn’t tell us anything about how advanced life could be. Today’s paper proposes a detection method for technologically advanced life that bridges these disciplines: looking at exoplanet atmospheres not just for the presence of life in general, but for the chemical signatures of intelligent life.

Spectral analysis of exoplanets’ atmospheres is one of the next frontiers of getting to know the planets beyond our solar system. By comparing a star’s spectrum as-is to when an exoplanet is transiting in front of the star, researchers can see absorption lines that correspond to components of the planet’s atmosphere. While today we have the capability to analyze only the atmospheres of some very large exoplanets, the next generation of technology—including the James Webb Space Telescope (JWST), set to launch in 2018—will give us unprecedented insights into the atmospheres of exoplanets that are much more like Earth.

A quick perusal of the Astrobites tag for “atmospheres” shows that researchers are already deep into predicting what these spectra may tell us about the composition of exoplanet atmospheres and what those atmospheres might tell us about life. (Korey’s recent post, Earth as an exoplanet via the Moon, is especially pertinent.) The authors of today’s paper join and expand the conversation, asking whether signs of industrial life—in other words, pollution—could be detected as well.

The authors limit their inquiry to an Earth-mass planet orbiting a white dwarf, as they say that white dwarfs are likely to have long-lasting habitable zones and their small size makes for good contrast between stellar and planetary spectra. They focus on two chlorofluorocarbons (CFCs), CCl3F and CF4. These molecules are best known on Earth for their part in ozone depletion, but they’re also greenhouse gasses. While some easier-to-detect molecules, like methane and nitrous oxide, are also byproducts of industrialization, they are not as exclusively anthropogenic as these pollutants. The authors point out the irony that the worst-case scenario for pollution in Earth’s atmosphere—high concentrations of global warming-inducing molecules—makes for the best-case scenario for atmospheric detection of an alien civilization.

The authors simulate the telescope exposure time that would be necessary to detect CCl3F and CF4 at concentrations 100 times stronger than those currently found on Earth, aiming for high (and thus detectable) concentrations that still seem plausible. In looking at such high concentrations of pollutants, the authors leave open the question of whether such a polluted planet, although obviously once home to a technological civilization, would still be home to life. These pollutants have very long lifespans. CF4, for example, has a half-life of around 50,000 years. The authors mention that, if an exoplanet’s atmosphere showed high levels of these pollutants without signs of shorter-lived biomarkers, we might have evidence that an intelligent civilization once resided on that planet but does not any more. We would also, then, have a sobering reminder of the risks of industrial pollution.

But back to the science. The science tells us that CF4 (at 100 times its concentration now on Earth) could be found with around three days of exposure time with the JWST. CCl3F would only take a day and a half. The authors also generate synthetic spectra to show that these molecules could be detectable: 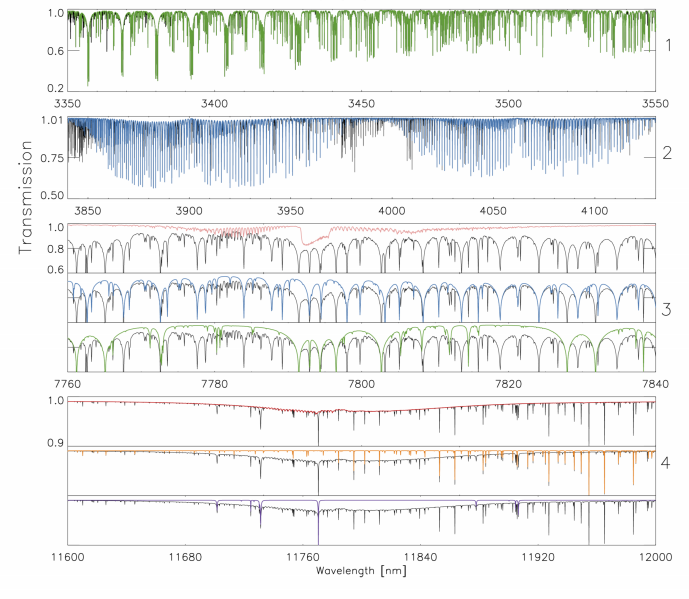 Spectral windows used for detecting CFCs and biomarkers. Each is a tiny slice of the full simulated spectra, chosen for the absorption features that indicate the presence of certain molecules (color key below).

The exposure times needed to detect industrial pollutants are much greater than what it will take to find water vapor, molecular oxygen, carbon dioxide, and other basic indications that unintelligent life may be present. However, the authors sketch out an observation plan that would make strategic use of telescope time. Including methane and nitrous oxide with the initial list of biomarker targets can give you a hint, after just a few hours of exposure, that industrial pollution may be present. If biomarkers and these pollution indicators are found, it may be worth additional observing time to determine rough levels of CFC pollutants. The long time-frame needed to detect CFCs also allows for detecting additional biomarkers like the chlorophyll “red edge.”

Based on our own track record with CF4 here on Earth, we could expect a ten-fold increase in its concentration in our atmosphere to take approximately 1000 years. Detectable levels of CF4 are another ten times more concentrated than that. It is unclear whether a civilization that wreaked such havoc on its environment would still be around. But even just knowing that an industrial civilization had existed on another planet would be huge. And evidence that they had polluted themselves out of existence could be a crucial lesson for life on Earth.