The Kepler mission is hot right now, having just released it’s largest data set ever last month (see this astrobite for discussion about the data release and this one for a good overview of the mission). One of the main aims of Kepler is to get statistics on exoplanets. How rare are they? Which stars have the most planets? What sized planets are most common? How far away are they from their host star? In the latest paper to be published by the Kepler Science Team, Howard et al. attempt to begin to answer some of these questions by analyzing the trends in the published data.

In order to reduce systematic effects in their statistical analysis, the authors first limit their sample to the brightest half of the stars in the Kepler field. Within that sample, they then consider only main sequence stars with effective temperatures between 4100 and 6100 K. These criteria result in a sample that is roughly one third of the total Kepler sample.

They only consider planets that are larger than two Earth radii on orbits shorter than 50 days. By selecting these planets, they ensure that they have a ‘complete sample’; that is, they should not be systematically missing planets in a way that would skew their statistics. 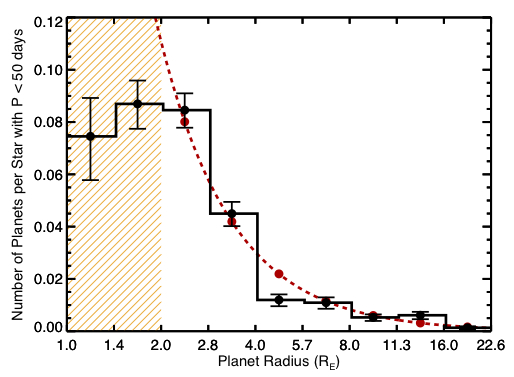 Occurrence of planets is plotted as a function of the planet radius. Note that below 2 Earth radii (the shaded region), the sample is not 'complete.' A power law has been fit to the data for planets larger than 2 Earth radii. 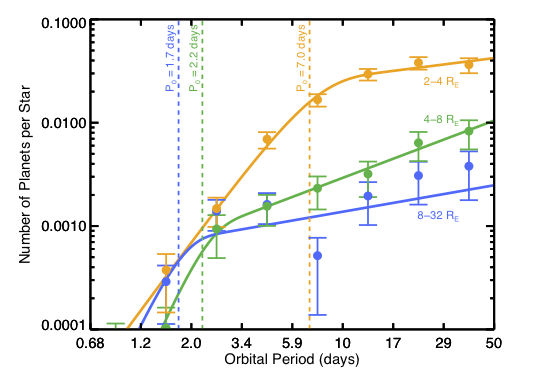 Orbital period is plotted against the number of planets found. Note that planets appear to become more common further away from the star. Different sized planets appear to have different 'cutoff' periods, below which there are very few detected planets. 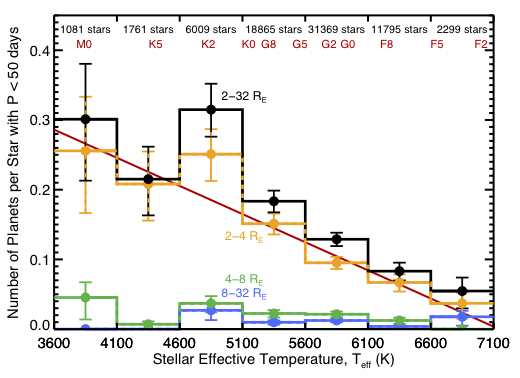 The temperature of the star is plotted against the number of Kepler planets found. Cooler stars appear to have up to 7 times more planets than hotter stars!

The authors have begun to answer some of the most fundamental questions we can ask about planets for the subset of Kepler data currently available. The results published in this paper are interesting because these statistics give theorists an insight into planetary formation and migration mechanisms. Models should be able to reproduce the distributions of planets that we observe, so measuring these distributions well allows us to determine which models fit the data best.

These types of statistics, as they are extended for smaller planets in wider orbits, will eventually allow us to constrain how the solar system formed and understand just how rare our own Earth might be.