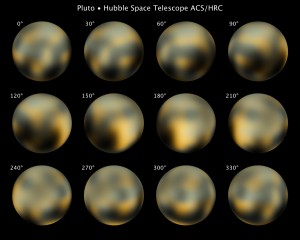 Hubble images of Pluto, taken at different times over a Plutonian day. Pluto is around 2,400 km in diameter, or 2/3 times the size of the Earth’s moon and is 40 times further from the Sun that we are, so it’s pretty tiny in Hubble’s field of view. In fact, it only covers 3 of Hubble’s pixels!

In July of this year (2015), NASA’s New Horizons mission will fly past Pluto and its moons. It will map the surface of the Plutonian system in unprecedented detail, revealing craters and other surface features for the first time. In preparation for the deluge of newly discovered craters, mountains, crevasses and other surface features, Mamajek et al. discuss a naming system for Pluto and its moons.

Pluto is one of the last large planetesimals in the Solar system to have its surface imaged in detail. Pluto’s surface features will reveal the history of its life in the alien conditions at the outer-most edge of our Solar system. The images on the right were taken by the Hubble space telescope. They show Pluto’s surface at different times during a single rotation. Fuzzy blobs of colour hint at interesting surface features.

The International Astronomical Union (IAU) is pretty strict about naming conventions. To name anything in the Solar system you have to submit a naming request which goes through an approval stage. They wouldn’t, for example, like the surface features of pluto to be named after the discoverer’s cats. 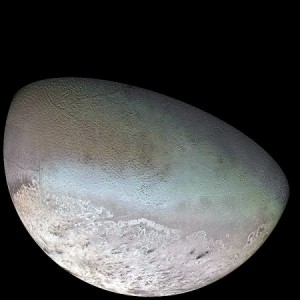 An image of Triton, a moon of Neptune taken by Voyager 2. The surface features of Pluto are expected to be similar to those captured on Triton.

When Pluto was discovered back in 1930 by Clyde Tombaugh, it was named, as was traditional, after a Roman deity: Pluto, the god of the underworld. To continue along the hell theme, the IAU states that the surface features of Pluto should be named after “Underworld deities”. But how many of those can there be? Won’t we run out pretty quickly? And what about different classes and sub-classes of surface features? Take Triton, for example. It’s a moon of Neptune and, arguably the most Pluto-like object in the inner Solar system. On Triton’s surface (which has already been imaged), there are 12 different classes of surface feature. In this white paper, Mamajek et al. put forward some naming systems for the different surface classes that will inevitably be uncovered on Pluto and its moons.

For the albedo features on Pluto’s surface, i.e. features produced by variations in reflectivity, Mamajek et al. suggest naming after “Deceased people and places associated with the discovery and characterization of Pluto”. For craters they suggest “Underworld deities and locations from mythologies around the world”. For example: “Mictlan (the Aztec underworld), Wepwawet (ancient Egyptian mythology), etc”. For other types of surface features, like chasms, mountains and valleys, they suggest using words that mean ‘cold’ in extinct languages (similarly, mountains on Mercury are named after obscure words for ‘hot’).

Footage of Pluto and Charon from New Horizons, taken in January 2015. Click to watch. “A Moon over Pluto (Close up).3” by NASA/Johns Hopkins University.

The IAU suggest that Pluto’s satellites should be named, “for characters and creatures in the myths surrounding Pluto (Greek Hades) and the classical Greek and Roman Underworld”. Mamajek et al. suggest that albedo features on the moons should be named after people involved the with discovery of Pluto’s satellites and that the craters should be named after “characters, places, and starships associated with the Star Trek series of television shows and movies by American screenwriter and producer Gene Roddenberry (1921-1991). Examples: Kirk, Spock, McCoy, Sulu, Uhura, Chekov, Scotty, etc”. There is a precedent for naming surface features of Solar system bodies after fictional places and characters: Titan’s mountains are named after mountains of Middle Earth and its surface features are named after Lord Of the Rings characters and planets from Dune. There is also an asteroroid called James Bond (9007) and another called Monty Python.

Personally, my favourite naming suggestion is for other surface features of Plutonian moons to be named after “Small towns, settlements, or islands serviced predominantly by ferry.”

New horizons will be at its closest approach (at 10,000 km) on the 14th of July, 2015, but it has already spotted Pluto. The video above shows footage taken by New Horizons in January of this year. 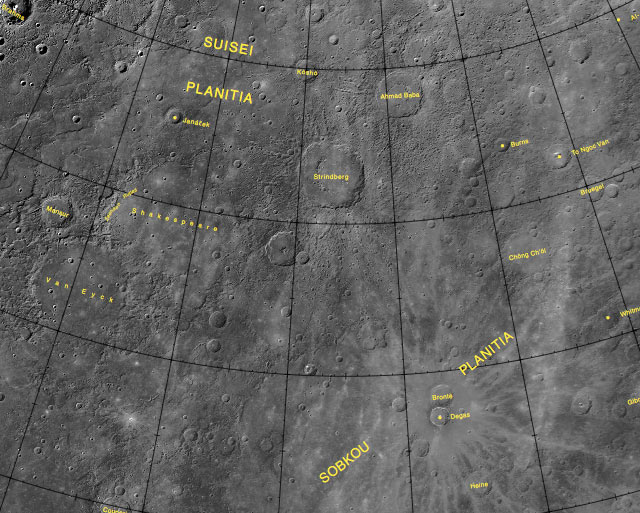 The surface of Mercury with named features.