Title: On the Early In Situ Formation of Pluto’s Small Satellites

Many moons, many mysteries

Planet or otherwise, Pluto’s not some lonely chunk of rock lurking around the edges of the Solar System – as previous astrobites, such as this one and this other one, and gorgeous pictures from the New Horizons spacecraft have shown.  Pluto has not one, not two, but five satellites (natural satellites, not artificial ones), which make up its complex five-moon system.  The largest of the moons is Charon, which is half the length of Pluto and one-eighth of Pluto’s mass.  The other four moons, in order from closest to farthest from Pluto, are Styx, Nix, Kerberos, and Hydra.  Altogether these moons make up quite a peculiar system; all five of them, for example, have orbits which are almost perfectly circular and nearly coplanar (aka, lie in the same plane).  Moreover, the smaller moons’ orbital periods relative to Charon fall near some very neat intervals of 1:3:4:5:6 – meaning that the orbital periods of Styx, Nix, Kerberos, and Hydra are about 3, 4, 5, and 6 times the orbital period of Charon, respectively. 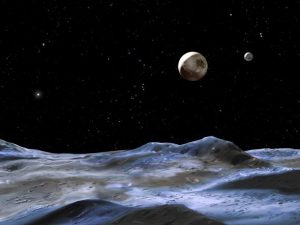 Figure 1: An artist’s impression of what Pluto and Charon would look like from the surface of one of Pluto’s smaller moons.  Image Credit: G. Bacon, STSCI/ESA/NASA.

So what sort of astrophysical phenomenon led to such a nicely oriented orbiting system?  The answer is still unclear.  Scientists do think they have a pretty good explanation for how Charon formed.  Scientists discovered Charon back in the 1970’s, and nowadays the most widely accepted idea for Charon’s formation is the intact capture scenario.  This scenario says that Charon formed back when the Kuiper Belt was a lot more crowded with objects; at some point, Pluto collided with a Kuiper Belt object and captured the impactor into orbit, and that impactor became Charon.  After the collision, tidal evolution (which would have slowed down Pluto’s spin and pushed Charon’s orbit outward) helped bring Pluto and Charon into the orbital system that the two have today.

Pluto’s four smaller moons, on the other hand, are recent 21st-century discoveries, and their strange orbits have yet to be explained.  There are a number of proposed formation scenarios out there, but scientists are still trying to find a scenario that completely and consistently explains the complex moon system that we observe today.

The authors of today’s paper joined this very search.  They focused on one scenario in particular: the early in-situ formation scenario.  This scenario follows right along with the Charon-forming intact capture scenario described earlier: it states that the impact from the collision that formed Charon also produced a ring of debris at about 20 RP, where RP is the radius of Pluto.  This ring spread outward over time, due to angular momentum transfer from the Pluto-Charon system.  Pluto’s smaller moons then formed from the debris ring near their modern orbital distances, in orbits that were already nearly coplanar and circular as a result of the ring.

But the outward spread of the ring would have happened quickly, reaching today’s distances all while Charon was still close to Pluto (aka, before Charon’s tidal evolution).  Today’s authors pointed out that the story couldn’t just end there, because Charon would still need to move its orbit outward due to tidal evolution.  They figured that, if early in-situ formation really did occur, then the outward movement of Charon (being a much more massive body) might have disrupted the smaller moons’ orbits.  To investigate this possibility, the authors set out to simulate Charon’s tidal evolution after the early in-situ formation scenario, to explore how Charon’s movement outward might have affected the smaller moons orbiting around Pluto as well.

No body by N-Body

Today’s authors used N-Body simulations to play out the scene of Charon’s tidal evolution, after the four small moons had already formed from a debris disk, in order to explore how the tidal evolution would affect the small moons’ orbits.  They used the Charon-forming intact capture scenario to help inform the large moon’s initial conditions, such as for choosing Charon’s initial eccentricity (which describes how circular an orbit is) and the moon’s starting distance from Pluto before tidal evolution.  They also varied certain initial conditions, including Charon’s initial eccentricity and the form and speed of Charon’s tidal evolution, to help cover a range over how the intact capture scenario might have played out in practice.

To simulate small satellites, the authors used massless test particles, which they placed randomly between about 35 and 60 RP from the Pluto-Charon system.  This range covered the orbital distance range that Pluto’s four small moons orbit in today.  The authors based the test particles’ initial conditions, such as their coplanar orbits and initial eccentricities, on theory as to what satellite orbits would look like after forming from a debris disk.

The authors started with 200 test particles for each simulation run with different initial conditions.  Then they let Charon tidally evolve.  They kept track of how many test particles survived after the tidal evolution, as well as of surviving particles’ final eccentricities and orbital periods relative to Charon. 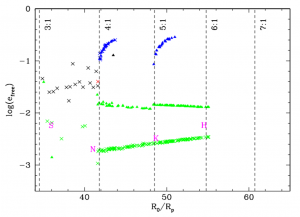 Figure 2: Results from the simulation run that most closely explains the moon system we observe around Pluto today.  The x-axis gives the final mean distance to the Pluto-Charon system in units of Pluto radii.  The y-axis represents the final eccentricity in log scale, with smaller log values indicating orbits closer to circular in shape.  The scattered points show the test particles that survived after tidal evolution.  Green points stand for test particles not affected by resonance with Charon during Charon’s tidal evolution; black points are those particles that were affected by resonance but were not trapped by it; red points are those particles that were trapped by resonance but escaped; and blue points are those particles still trapped in resonance with Charon at the end of the simulation run.  The dotted black lines guide the eyes along the distances where Pluto’s moons orbit today.  The blue points in this case seem to have a preference for the 4:1 and 5:1 orbital ratios of Nix and Kerberos, since they are so thickly concentrated there and nowhere else.  But no points have such a significant preference for the 3:1 and 6:1 orbital ratios of Styx and Hydra.  From Figure 8 in the paper.

In most of the simulation runs, the final system after evolution looked quite different compared to the moon system we see about Pluto today.  In some cases, for example, the majority of the test particles were ejected from the system by Charon during the tidal evolution phase, while in other cases the orbital periods of the surviving test particles didn’t end up near the special 1:3:4:5:6 values.  The most promising simulation run, as shown in Figure 2, featured test particles that survived through tidal evolution and had orbital period ratios concentrated around 4:1 and 5:1.  However the only particles that reached the 6:1 distance of Hydra seemed to have no preference in doing so, and hardly any particles reached the 3:1 distance of Styx.

In short, none of the simulation runs led to the complex moon system we see around Pluto today.  The authors did acknowledge that they made some crucial assumptions and simplifications for their simulations, such as their treatment of satellites as massless, and that relaxing these characteristics might change the simulation results.  But overall they noted that in order to explain how Pluto’s moons came to be, we need to find a scenario that accounts for all of the complexities in the orbiting system.

And so the search continues!  We can use the results from today’s paper to inform new ideas and new scenarios for how Pluto’s moons might have formed.  Hopefully, we’ll be able to one day witness a simulation that reproduces every characteristic of Pluto’s orbiting moon system – and in doing so, unravel more of Pluto’s mysteries as a whole.  Because even if Pluto isn’t considered a planet anymore, it’s still a beloved part of the Solar System – and its origin story forms an important piece in the puzzle of how the Solar System we live in today came to be.