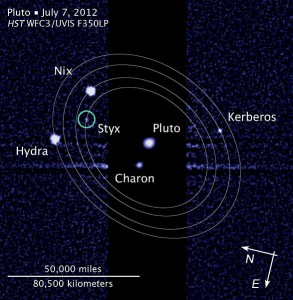 Fig 1: Pluto, Charon, and their four small satellites. (This Hubble image revealed the existence of Styx.)

Pluto may be just one dwarf planet among many, but its onetime place in the planetary pantheon has kept it dear to many hearts. For years it was part of the familiar solar system mnemonic—all the pies that our very excellent mothers served and so on—but it actually still holds significant scientific mystery. And demotion aside, no other dwarf planet has a NASA spacecraft hurtling toward it on a nine-year journey. In 2015, New Horizons will reach Pluto, giving us an unprecedented view of a system that has been known primarily through deduction and inference. As that meet-up approaches, simulations provide more than just speculation—they help predict and explain strange phenomena that New Horizons’ cameras might see in the Pluto system.

To be fair, as the authors of today’s paper point out, the “Pluto system” is really a binary planetary system: Pluto and its “moon,” Charon, orbit a shared center of mass 890 km above Pluto’s surface. Orbiting this binary pair are four satellites—Styx, Nix, Kerberos, and Hydra—all discovered within the last decade. 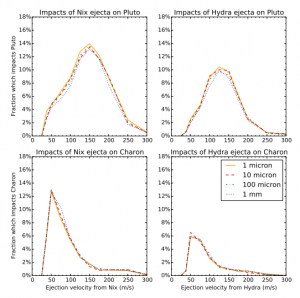 Fig 2: Percentage of dust ejected from the small moons that lands on Pluto and Charon. Although, at any given speed, it’s never more that 13%, these impacts add up.

These small satellites have very low escape velocities, which means that dust kicked up by impacts has a relatively easy time of escaping rather than settling back down to the little moon’s surface. (For comparison, the escape velocity from Earth’s surface is around 11,000 m/s; escape velocity from one of Pluto’s tiny moons is around 30 m/s. That’s 24,000 mph versus only 67 mph.) Today’s paper looks at the fates of that dust. The authors use a series of mathematical simulations to explore the interactions of a number of variables (point of origin, direction, velocity) under a number of influences: gravity (from Pluto, Charon, and the distant sun), solar radiation pressure, and aerodynamic drag from Pluto’s atmosphere. They built their work on many prior simulations of dust in the system, with a shift in focus—earlier research has looked at the paths of dust particles, whereas this paper focuses on how often and under what conditions dust ejected from the small satellites ends up landing on Pluto or Charon.

According to these simulations, the fastest dust ejections—over 400 m/s, or almost 900 mph—all leave the system, as do many slower particles, flung out of the system by a close encounter with Pluto or Charon. Nearly all of the slowest dust, ejected at speeds below 40 m/s (90 mph), lands back on its source; speeds just above escape velocity still aren’t enough to remove the dust from the satellite’s orbital path, where it eventually reimpacts. Between those extremes, dust particles had a chance of impacting on Pluto or Charon. Figure 2 shows the percentage of impacts from Nix and Hydra onto Pluto and Charon. Although the highest percentage of impacts for particles at any given speed was only around 13%,  and for other speeds was often much lower, over the lifetime of Pluto, Charon, and their moons, this leads to significant accumulations of dust. An even layer of the last three-and-a-half billion years of dust would coat Pluto a centimeter deep, and Charon three centimeters. But considering the uneven distribution of impacts (figure 3), the dust could be much deeper in some spots. 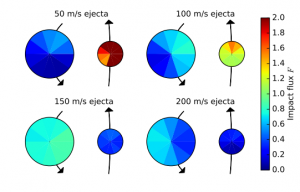 Fig 3: Dust from Nix impacts unevenly onto the surfaces of Pluto and Charon. Red areas get the most most; dark blue the least. Arrows indicate the direction of orbital motion.

Those dust particle impacts and accumulations may be key to explanations of some observed characteristics of Pluto and Charon. The low-velocity ejecta are projected to impact Pluto mainly in equatorial areas that match regions of low albedo (i.e. less reflective of light). New Horizons’ images could further illuminate this issue. Additionally, this study’s new calculations of dust flux on Charon revitalize the possibility that heat transfer from dust impacts, rather than cryvolcanism, could be responsible for the presence of crystalline water ice, which Charon’s surface should be too cold for.

So much is unknown about Pluto and its companions. The sizes of the small moons have been estimated, but aren’t known for sure. Additional small moons beyond the orbit of Hydra are predicted by some models, but aren’t observable from Earth. New Horizons is looking for them, and it’s looking to radically expand our knowledge about Pluto, Charon, and other Kuiper Belt residents. Rather than being the smallest planet, Pluto is now the most well-known icy dwarf planet, and we are in the process of learning much more about it, its system, and its outer solar system kin.