Title: New insights on the formation of nuclear star clusters

If you dive in near the center of most galaxies, you will find dense groups of stars known as nuclear star clusters (here ‘nuclear’ refers to the nuclei of galaxies, not atoms). These populations of stars are very compact, containing stars with total mass up to a hundred million suns! Their properties such as their masses relate closely with the galaxy global properties. Therefore, understanding the origins of their properties provide clues to galaxy evolution. In addition, the extremely high densities of stars are believed to be conducive to merging of stars, a potential channel for creating supermassive black holes.

How do these star clusters end up at the centers of galaxies? There are two main mechanisms, namely, in-situ formation and migration.  They represent two extremes: in the in-situ picture, stars and the resultant clusters are created locally at the galactic center from infalling gas; in the migration picture, star clusters are made elsewhere and drift to the center. Figure 1 shows the cartoon pictures of these two pathways. Note that the red clumps are the gas clouds making stars, black dots are the stars formed, and the arrows denote motion in space.

Figure 1. Schematic diagram for the traditional formation scenarios of nuclear star clusters. The top and the bottom row are the in-situ formation and the migration pathway, respectively. The red patches are the dense gas clouds capable of making stars; the black dots represent the stars formed; the arrows denote movement in space. (Upper panels of Figure 1 in original paper.)

Today’s paper proposes a hybrid picture connecting the two extremes, known as the ‘wet migration’ scenario (Figure 2). In this revised picture, star formation continues as the clusters sink towards the galactic center. The merging of clusters may even trigger further episodes of star formation. The authors investigate this new formation scenario with computer simulations and provide observational signatures for the proposed pathway.

Nuclear clusters are most commonly observed in dwarf galaxies. Simulations in today’s paper therefore start with a dwarf galaxy consisting of a gas disk, a disk of stars, and a dark matter halo. These components attract each other gravitationally, producing locations of high gas density where stars are born. After stars are formed, they are capable of modifying their environment by emitting radiation and exploding as supernovae. Let’s see the ‘wet migration’ scenario in action! 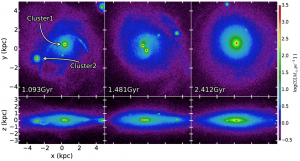 Figure 3. Surface density of stars projected face-on (upper panels) and edge-on (bottom panels). Cluster 1 and 2 are formed away from the galactic center then merge to become a nuclear star cluster. The flattened shape of the resultant nuclear cluster as seen in the bottom right is suggested to be an observational signature of the proposed ‘wet migration’ scenario. (Cropped version of Figure 5 in the original paper.)

Figure 3 shows the projected density of stars formed in the course of the simulation. Gravitational interactions and supernova blast waves induce irregularities in the galaxy, giving rise to the formation of a variety of star clusters across the galaxy disk. The most massive two are labeled Cluster 1 and Cluster 2, which dominate both the stellar mass and star formation activities of the entire galaxy. Some smaller clusters are destroyed via tidal interactions, leaving only a handful of them at the end of the simulation. Through further gravitational interactions the two massive clusters sink to the center of the galaxy, eventually merge and become a nuclear star cluster. The redistribution of angular momentum during the merging event flattens the shape of the nuclear cluster (bottom right panel of Figure 3). A more spherical shape is expected if there was no merging. 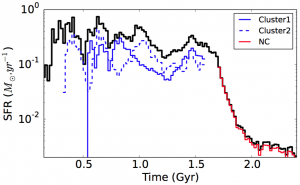 Figure 4. Time evolution of the star formation rates of the two most massive clusters (blue) and the galaxy as a whole (black). At around 1.7 Gyr, the merger triggers intense star formation, which leads to strong stellar feedback that almost cut off further star formation. (Figure 8 of original paper.)

Figure 4 shows the time evolution of the star-forming rates of the two massive clusters. Unlike the migration picture, both clusters are still actively making stars at a similar rate while they make their way to the galaxy center. The merging compresses the gas and creates a dense cloud, leading to a starburst (= a fancy name for rapid formation of many stars). The stellar feedback from the starburst then disperses the remaining gas and almost terminates further star formation. This is shown by the sudden drop in star formation rate at ~1.7 Gyr. In the in-situ formation picture, new stars are believed to be made continuously. The authors therefore propose an observational diagnostic for the new ‘wet migration’ formation scheme: flattened nuclear clusters without young stars. This may help discern nuclear clusters formed via different channels.

As noted by the authors, the three formation scenarios discussed are not mutually exclusive. Moreover, the reality is much more involved than simulated here. For example, galactic scale structures such as bars and spiral arms and cosmological gas infall may play an important role in building nuclear clusters. This paper nevertheless illustrates an important part of the story. And of course, we will hear much more about nuclear clusters, stay tuned!

The Milky Way’s Alien Disk and Quiet Past