Galaxies can’t form stars forever! At some point in its evolution, a galaxy will consume all of its star forming fuel (cold, dense gas). Exactly when this occurs, however, isn’t a simple question of taking the amount of gas present and dividing by the star formation rate. There are a host of processes that can stop gas from cooling and condensing (as is necessary for star formation), thereby “quenching” star formation in a galaxy. One such process, called ram-pressure stripping, occurs as galaxies fall into galaxy clusters (or as dwarf galaxies orbit larger galaxies), and removes gas that would otherwise have cooled and fueled star formation. Another process is supernovae, which can heat up and eject gas. Galaxy-galaxy interactions like mergers can have a similar effect. This occurs most frequently in galaxy groups and galaxy clusters, where galaxies are relatively close together.

Although we have a good understanding of what processes can stop star formation, there still remain many unanswered questions, including how they work in a given galaxy, when they occur, which processes are dominant, and how all this may vary for different galaxies. The authors investigate these problems by examining how the fraction of quenched galaxies (those with star formation shut off) varies with galaxy mass for all galaxies within 3 Mpc of us. They also examine the role of galaxy environment, differentiating between satellite galaxies (such as those around our Milky Way), and those that are isolated (usually referred to as “field galaxies”). Armed with this information, they construct models to constrain some key parameters of the star formation quenching process.

The authors use a selection of galaxies from SDSS and the NASA-Sloan Atlas of galaxies (NSA). A galaxy here is classified as star forming if it contains young, hot stars and cold gas; this is not a perfect metric for all galaxies, however, and the authors take this uncertainty into account. The largest source of uncertainty here lies in determining whether or not a given galaxy is a satellite galaxy or an isolated galaxy. Galaxies are considered satellites if they lie within a specified redshift interval of another, more massive galaxy. The redshift is identified by the Doppler shifting of light from the observed galaxy. However, this is subject to projection effects, as the sometimes large peculiar velocities of galaxies can cause shifts in their redshift measurement that can cause them to appear as a satellite to another galaxy, contaminating the sample. The authors determine the likelihood of this occurring by conducting mock observations of a cosmological N-body simulation (the Millenium simulation), where the actual galaxy positions are known, and comparing the observed satellite count to the actual satellite count. 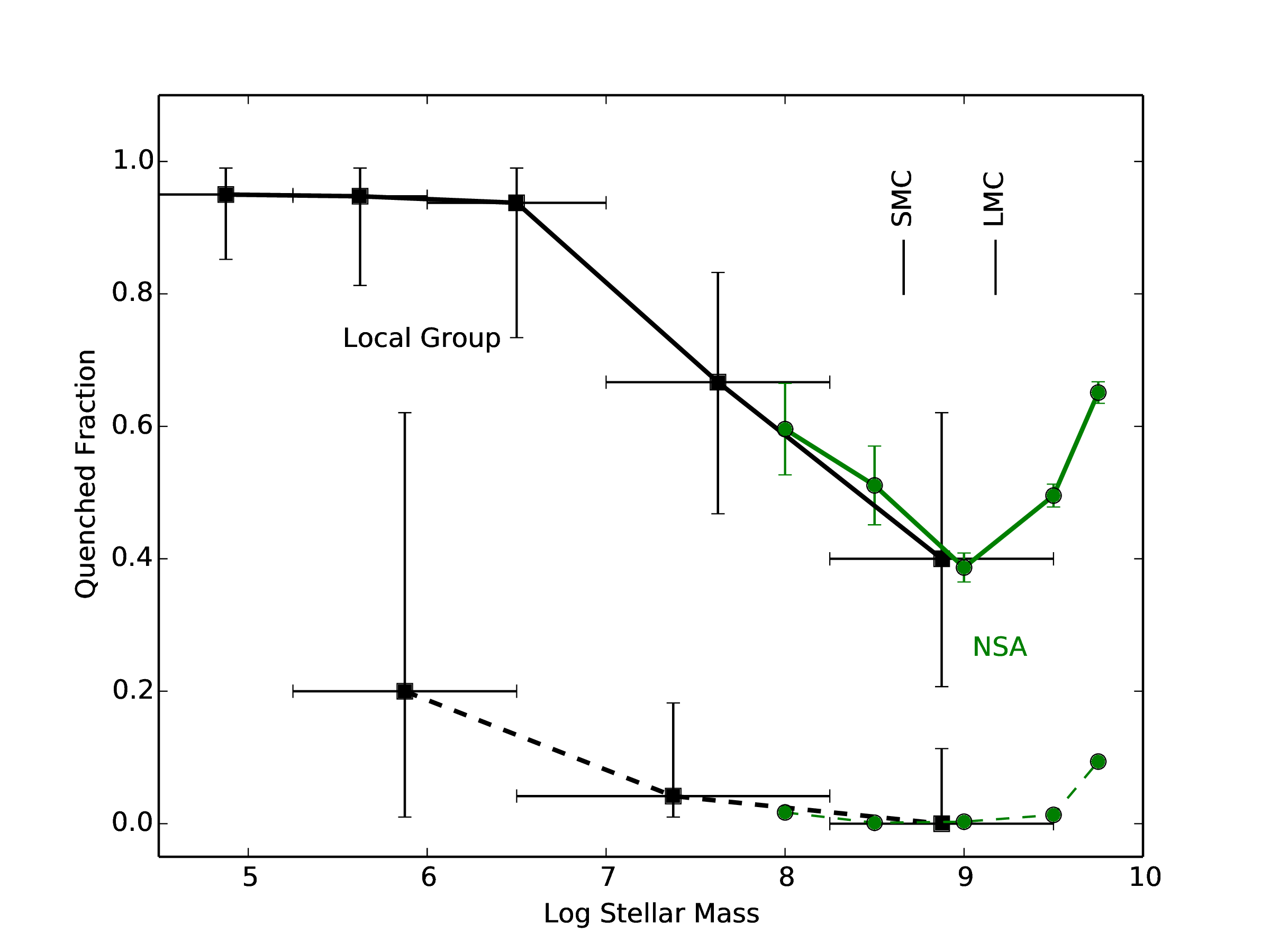 Fig. 1: The fraction of quenched galaxies at a given galactic stellar mass (total mass of stars in the galaxy). The solid lines show, for a host galaxy of a given stellar mass, the fraction of its satellites that are quenched. The dashed lines show the fraction of isolated galaxies at a given mass that are quenched. The black lines denote SDSS galaxies, while green lines denote galaxies taken from the NSA sample. Due to the low values and large errors in the dashed lines, the authors consider these points consistent with zero. (Source: Fig. 1 of Slater and Bell 2014)

Improving Our Understanding of Quenching

The authors use their results to produce a better understanding of how long after a satellite galaxy reaches the point of closest approach (called pericenter) to the host galaxy does star formation cease. This model is somewhat akin to saying that once a satellite passes pericenter, it starts a fixed clock that counts down to its ceasing star formation. The authors do this by examining satellite galaxies in the cosmological N-body simulation called Via Lactea II. Looking at z = 0 in the simulation, they examine the distribution of times since pericenter passage for all satellite galaxies and show that, in order to reproduce the observed quenched fractions, star formation quenching must occur quickly for low mass galaxies, within 2 Gyr of pericenter passage. However, this clock is different for the higher mass (green in Fig. 1) galaxies, roughly 6-9 Gyr. This suggests that satellites of different masses respond differently to whatever effects will ultimately end their star formation.

The authors conduct a similar analysis using the maximum ram-pressure stripping force (which is related to the density of stars and dark matter in a galaxy, and the galaxy’s velocity) experienced by each satellite galaxy. They argue that, if ram-pressure stripping is the dominant source of quenching, that at least 50% of galaxies must experience forces of 10-12.8 dyne cm-2 or greater, and 90% must experience forces of 10-14.8 dyne cm-2 or greater. In addition, satellite galaxies, regardless of mass, appear to experience very similar ram pressure forces. Because of this, the authors argue that there must be a dramatic difference in how galaxies of different masses respond to ram-pressure stripping.