Title: Gas Accretion from Minor Mergers in Local Spiral Galaxies Authors: Di Teodoro, E. M. & Fraternali, F. Institute: Department of Physics and Astronomy, University of Bologna, 6/2 Viale Berti Pichat, 40127 Bologna, Italy Status: Submitted to Astronomy & Astrophysics How do disc galaxies maintain star formation for long periods of time? It’s a simple question but one with an answer that has eluded astronomers for a long time. If galaxies only have a finite amount of gas when they form, they will transform this gas into stars until eventually it is exhausted. However, star forming galaxies can show an almost constant SFR throughout their lifetimes. To keep this rate up at a constant level, they must therefore replenish their available gas for star formation through accretion onto the disc. There are two main sources from which galaxies can therefore accrete: the intergalactic medium (IGM; the baryonic gas found between galaxies that would be ideal for use in star formation) and through mergers. The processes by which a galaxy can both accrete and cool the gas in the IGM for the use in star formation are not well understood, however observations of merging galaxies have given us a better understanding of these processes. The authors attempt to understand the amount of gas that is accreted by galaxies through minor merger events of galaxies with dwarf companions. They use HI observations (neutral hydrogen, observed with radio telescopes) of a subsample of the WHISP survey to identify disc galaxies with dwarf companions from which they can estimate the SFR of the disc galaxy and the accretion rate of HI from the companion. They do this through a numerical code which utilises data cubes (data cubes are typical images with two spatial dimensions and an extra dimension to store information about velocity/frequency etc. which will help in the analysis of the trajectory of the dwarf galaxies)  to identify galaxies in their sample. Their code has three basic steps:

– identify the main, central galaxy in the image through an appropriate mask – search for any dwarf galaxies – estimate the maximum gas accretion rate from an estimate of the amount of gas in the dwarf galaxy divided by the minimum collision time between the central and companion galaxies

This allows the authors to identify that of 148 galaxies in their sample, 101 had no detectable companions, 15 showed a major merger companion (galaxies with comparable masses), 6 showed both major and minor merger companions and 26 showed only dwarf companions. 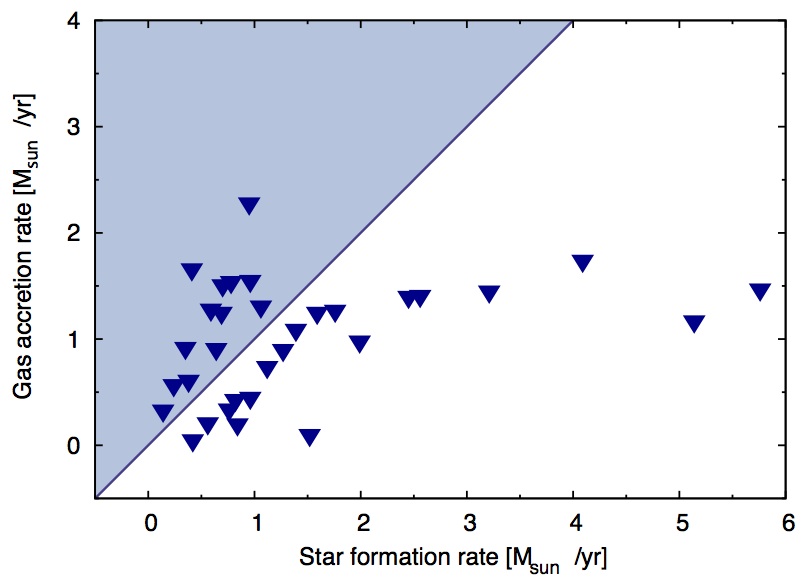 FIgure 1: The SFR against the calculated gas accretion rate for the galaxies found to have dwarf companions (blue triangles). The blue region denotes those galaxies which can maintain their SFR through a minor merger with it’s dwarf companion. Modified from Figure 5 in Teodoro & Fraternali (2014).

Focussing on those 32 galaxies with a minor companion (and ignoring any similar mass galaxies in those that showed both major and minor companions) the authors found a large range of estimated collision times from ~ 0.1-2.0 Gyr. They found an upper limit to the gas accretion rate across their whole sample of HI of 0.28 solar masses per year, whereas the calculated average star formation rate of the disc galaxies (calculated from the far infra-red luminosities) in the sample was 1.29 solar masses per year – the ratio between the two is therefore only ~ 0.22. For a galaxy to be able to replenish it’s much needed gas supply this ratio must equal to 1. Figure 1 (Figure 5 from Di Teodoro & Fraternali 2014) shows how for the individual galaxies they ran through their code (blue triangles) they lie below this ratio. The authors therefore conclude that the number of dwarf galaxies is too low to guarantee the gas replenishment needed for star formation. Given the assumptions they make that all dwarf galaxies will collide and combine with their main companion, all dwarf galaxies will disappear within the next 2 Gyrs. Considering that this mechanism for accretion must also account for galaxies accreting at high redshift and the fact that we still observe dwarf galaxies in the local Universe constrains their estimate even further, suggesting that in reality the ratio is much lower than that found. If the accretion rate from minor mergers is as low as this, this suggests that the main mechanism for accretion onto the disc is through the IGM. These findings apply some pressure to astronomers to better understand how galaxies are able to achieve this and whether it is substantial enough to account for the observed star formation rates of these disc galaxies.

Stellar Snacks or: How to Grow a Massive Black Hole through TDEs